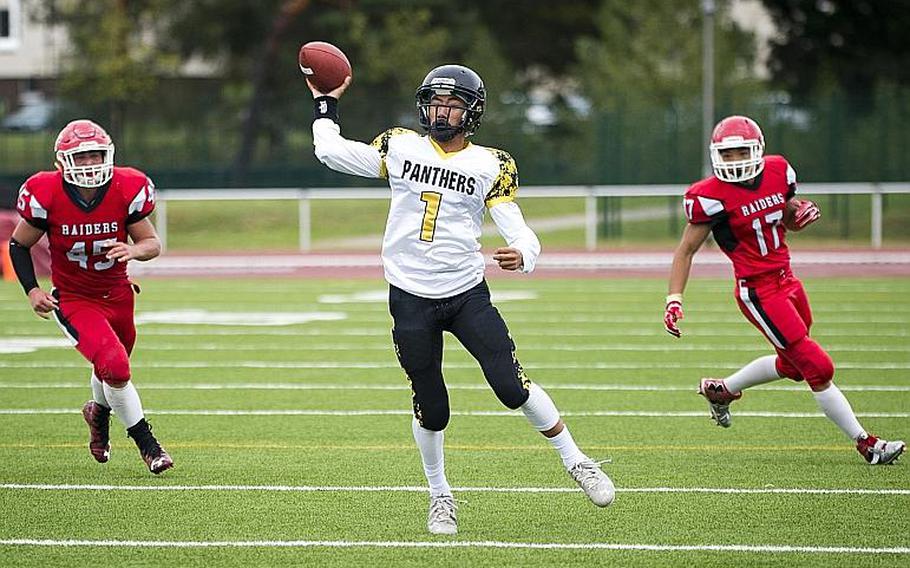 One of football’s most familiar cliches asserts that offense wins games, while defense wins championships.

That’s about to be put to the test. The high-powered offense of the undefeated Stuttgart Panthers meets the stingy defense of the defending champion Ramstein Royals in the DODEA-Europe Division I championship game Saturday at 5 p.m. at Kaiserslautern High School.

Stuttgart’s offense has been consistently productive and occasionally explosive this fall. The Panthers, aided by an opportunistic defense that provided occasional points and favorable field position, have averaged 36 points per game over seven combined regular season and postseason victories. That includes a 61-point outburst against Kaiserslautern that is the highest single-game point total for a Division I team this season.

The Panthers’ style is as notable as their substance. While many DODEA-Europe programs still gravitate to the run, Stuttgart unleashes an overwhelming air attack neatly complemented by a very proficient ground game.

Ramstein, meanwhile, has succeeded by locking down opponents defensively and presenting a manageable bar for its offense to clear. The Royals, using a collective tackling approach coach Carter Hollenbeck describes as “11 hats to the ball,” have held opponents to just under 10 points per game in seven regular season and playoff wins. That includes two games in which they denied their opponent a touchdown.

The teams’ disparate blueprints were laid out in their respective semifinal victories last weekend. Stuttgart piled on points in overwhelming Lakenheath 41-12, while Ramstein held a proficient Wiesbaden offense to a single first-quarter touchdown in a narrow 13-6 win, setting up Saturday’s expected clash of styles.

The regular season offers a test case in how the championship game might go. Stuttgart beat Ramstein 22-9 on Sept. 15, finally cracking the Royal defense for 16 unanswered points after falling behind at halftime.

That victory, along with their undefeated record and No. 1 seed, make the Panthers the favorite entering the Division I championship game. Remarkably, this is the first time that’s been the case for the program.

The Panthers, then known as Patch, reached the 2012 Division I championship game, where they were soundly defeated by the Royals 26-7. The upstart contender then receded to the division’s middle tier.

Newly branded as Stuttgart in 2015, the Panthers celebrated their relaunch by producing one of the most stirring championship runs in DODEA-Europe sports history. After sneaking into the playoffs with a losing divisional record, Stuttgart stormed into Ramstein for a long-odds semifinal and stunned the defending champion Royals with a late rally and a last-second field goal for a 10-8 upset win. A week later, they edged favored Wiesbaden 10-7 for their first Division I championship.

As it had after its previous title-game trip, however, Stuttgart’s momentum lagged in the wake of that memorable moment. The Panthers missed the playoffs in 2016 before roaring back in 2017 with a squad that looked elite from the moment its players hit the turf for the annual preseason camp held in August at Kaiserslautern.

Stuttgart coach Billy Ratcliff isn’t tapping into the magic of 2015 as he prepares his team for another title game.

“There are only a couple of players from that team two years ago that are here today,” Ratcliff said. “For us, it is a brand new game.”

And what a game it should be.