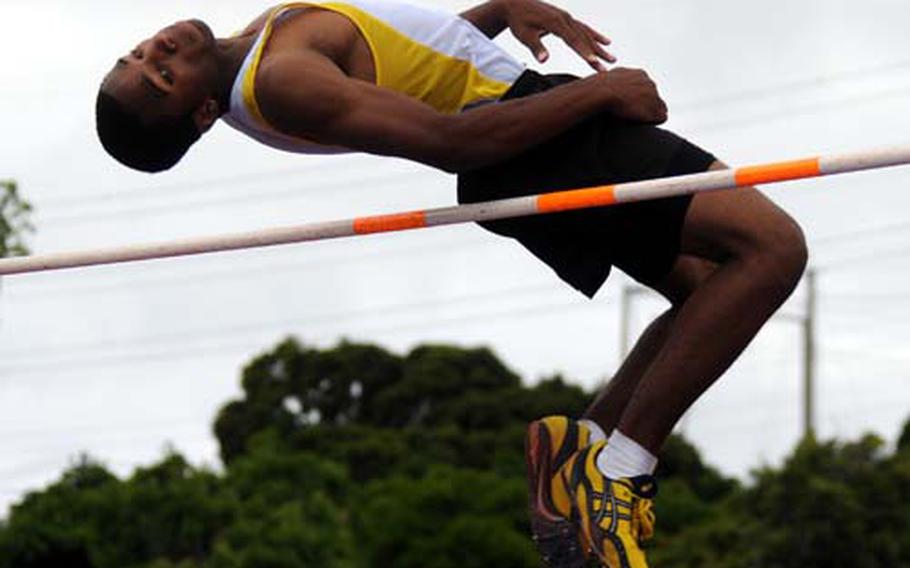 Shariff Coleman frowned when he heard the result of his 200-meter run: 23.36 seconds, about a half-second short of the Okinawa Activities Council district record for boys.

"Not good. Not satisfied," Coleman said, despite capturing his fourth gold medal of Saturday&#8217;s OAC district championship, in which Kadena won the boys team title and Kubasaki the girls. "Everybody on the team is flagging today. I don&#8217;t know what&#8217;s wrong."

Coleman, and many others at Koza City Stadium near Kadena Air Base, expressed frustration, including Sarah Wilson of Zion Christian Academy. She also won four golds and broke the district 400 record, clocking 1:00.68, .52 seconds better than the mark set six years ago.

"When the wind blows like that, I can&#8217;t push that hard," Wilson said of the less-than-optimal conditions, 21-mph gusts blowing into runners&#8217; faces on the back stretch.

"She wanted to drop it to 58 seconds," Lions coach Keefe Wilson said of Sarah Wilson, who ran 59.2 in the Mike Petty Memorial Meet on April 4.

Saturday&#8217;s meet was the first competition Okinawa runners have had since Petty. Weather washed out an April 18 meet, and similarly bad weekday afternoons have forced teams to practice indoors.

"That makes a lot of difference for these kids," the elder Wilson said.

"Weather could be a factor. Also a lot depends on what kind of week they had, practices, schoolwork; it could have been one of those kinds of weeks," Kubasaki coach Charles Burns said.

The wet stuff "definitely set us back a bit," Kadena coach Sergio Mendoza said, adding that the league&#8217;s top performers are "around Mike Petty times. We should be way beyond that. Hopefully, we&#8217;ll see some sunshine" before the Kanto Invitational on May 16 in Tokyo.

Other multiple gold winners were Kadena sophomore Jacob Bishop in the mile and two-mile, and Quirina Cohn of Kubasaki in the 800 and mile. Kubasaki&#8217;s Retsel Alvarez swept the girls discus and shot put.

Saturday&#8217;s only other record breaker was Kubasaki senior Marquette Warren, who eclipsed by 0.1 meter the boys shot put record with a throw of 12.32 meters.

What was not expected, coach Michael Schmidt said, was the girls slipping past Seoul International for the team gold medal.

"That was a surprise," Schmidt said after junior Kennedy Allen won three gold medals and the Falcons girls edged the Tigers 223-212 at Yongsan International School-Seoul. "We had a great meet."

Graham captured four golds and broke two more league records, in the 100 individual medley and as anchor of the 200 freestyle relay team. Graham tied for boys high-point honors, and Allen finished a point behind in the girls chase.

On the pitch, Osan American&#8217;s girls came up one victory short in the quest for their first KAIAC Division I Soccer Tournament title since 1999. Brittney Rader had a goal and an assist as Seoul Foreign downed the Cougars 3-1 in a driving rain at Seoul International&#8217;s Tiger Field.

"We came up a little short," Cougars coach Sung Plourde said. Bria Pressley had Osan&#8217;s lone goal in the second half.

Seoul Foreign regained the title it lost last year to Seoul American. "I missed it," Crusaders coach Joon Myong said. "The rain did make it messy, but the girls hung in there."

"Both teams could have walked away with it," Crusaders coach Doug Farley said. "It was a hard-fought game."