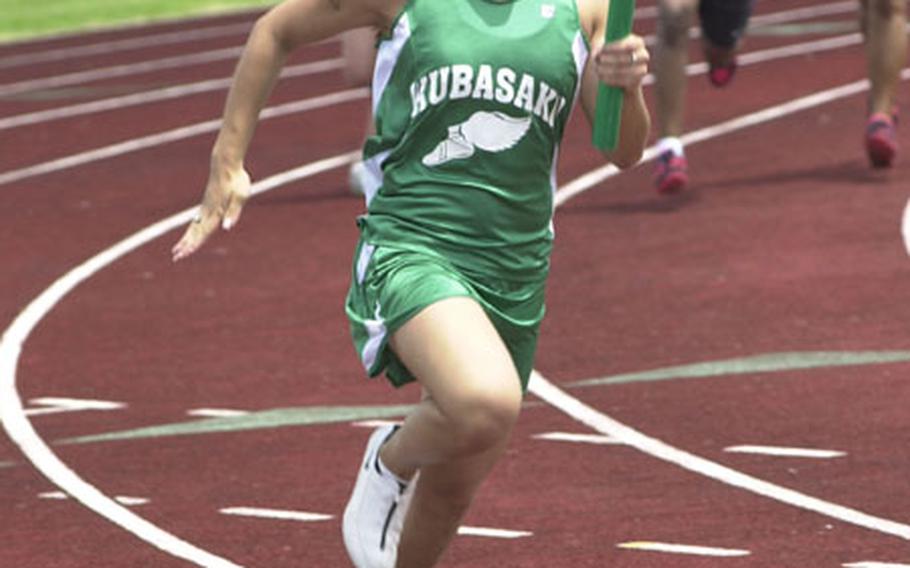 CAMP FOSTER, Okinawa &#8212; Kubasaki track and field coach Charles Burns watched, transfixed, as the slender, long-legged figure on the backstretch passed opposing runners as if they were standing still.

&#8220;She can go. That girl is something,&#8221; Burns said, marveling at his sprinting discovery, sophomore Serafina Smith.

Only a silver medal in the 1,600 relay &#8212; Kubasaki&#8217;s first defeat in a relay event in seven seasons &#8212; prevented a Dragons sweep of all six relays in the Pacific-wide meet. But Smith had given Kubasaki a brief lead on the second leg of that event, further justifying Burns&#8217; faith in her.

In Friday&#8217;s preliminaries, she broke the school record with a run of 1 minute, 2.99 seconds, then finished second to Lindsay Rutter of the American School In Japan in Saturday&#8217;s final.

&#8220;She&#8217;s going to be something to look forward to next year. Build a whole team around her. She still has that little-child attitude; she loves to run. And when you have legs that come out of your shoulders, that helps.&#8221;

It&#8217;s those kind of good starts that have been a trademark of Kubasaki relay teams.

Alas, the heat of the day (a humid 85 degrees), the pressure of running several events back-to-back &#8212; and the fleet feet of Rutter &#8212; couldn&#8217;t keep Kubasaki&#8217;s relay streak alive. The ASIJ girls team kept a streak of its own going, 123 straight team victories in interscholastic competition.

Softball program springs up at Misawa

MISAWA AIR BASE, Japan &#8212; The Misawa Diamonds, a softball team for high school-aged girls, made their debut over the weekend, splitting four games with Zama American.

Coached by Steve Stake, a Navy chief petty officer; Malinda Yard, a dependent spouse; and a cadre of assistants assigned to Misawa&#8217;s Naval Security Group Activity, the Diamonds had only been practicing for 2 &#189; weeks because of lingering snow.

Misawa&#8217;s 16-2 victory over Zama on Saturday was keyed by Langley Yard, who hit a grand slam and finished the weekend 10-for-17 with nine RBIs.

Okinawa also celebrated the launch of a softball program over the weekend. Unlike their counterparts at Kadena and Kubasaki on Okinawa, who played their season openers Saturday as part of a partnership among the schools, base youth services and the local communities, the Diamonds are a club team under the banner of Misawa Air Base&#8217;s 35th Services division.

&#8220;We have no softball programs at Misawa for girls of any age except for adults, and we&#8217;ve been trying for more than two years to get something started,&#8221; Stake said.

Donations, of unspecified amounts, from the Misawa Officers Wives&#8217; Club and Enlisted Spouses&#8217; Association helped get the team off the ground, Stake said; 35th Services allows the team the use of its fields.