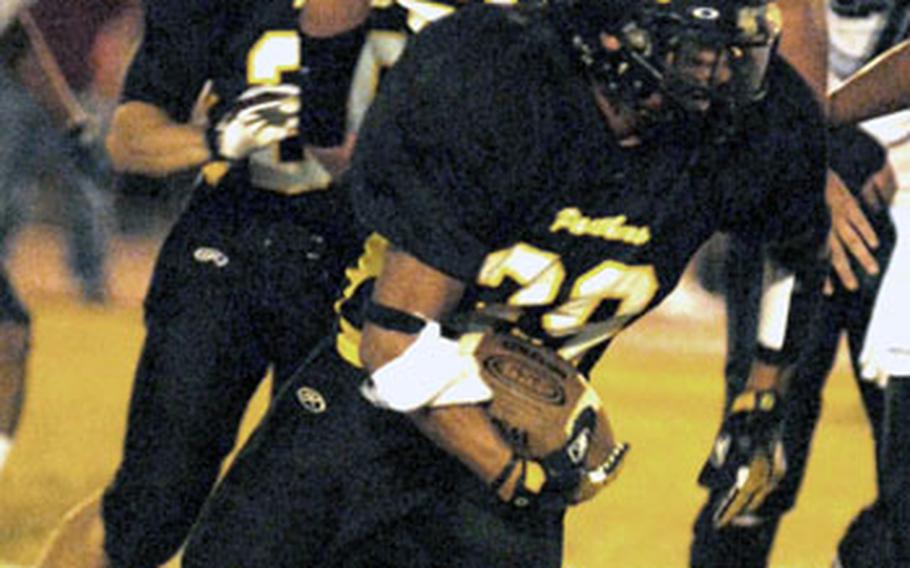 Kadena linebacker Vince Coronado (39) takes off for the end zone with a recovered fumble during Friday&#39;s Okinawa Activities Council football season-opening game. Coronado returned the fumble 58 yards for a touchdown for the Panthers, who forced six turnovers in a 13-0 shutout. (Dave Ornauer / S&S)

KADENA AIR BASE, Okinawa &#8212; It wasn&#8217;t a pretty victory, but Brandon Harris and defending Far East Class AA football champion Kadena picked up where they left off last season.

Harris ran for a touchdown and intercepted two passes, and Vince Coronado returned a fumble for a score. Kadena&#8217;s defense did the rest, forcing six turnovers and shutting out Kubasaki 13-0 on Friday night at Kadena&#8217;s McDonald Stadium in a penalty-filled Okinawa opener.

"He&#8217;s going to be an important part of our team," coach Sergio Mendoza said of Harris, who had four touchdowns on four second-half touches in the Panthers&#8217; 39-13 Class AA championship victory over Yokota on Nov. 10.

"This kid is fast, plays both sides of the ball and is aggressive."

Kadena, which has appeared in the Class AA championship game the past two seasons, won its fifth straight game over Kubasaki.

The victory wasn&#8217;t without its rough moments for Kadena, which was outgained 212 yards to 180 and committed 15 penalties for 139 yards. Kubasaki was flagged 12 times for 89 yards.

"To come out with a win as poorly as we played, we were lucky, but we have a lot of things to work on," Mendoza said.

Kadena&#8217;s touchdowns came just 4:05 apart in the first half. Harris set up his own 9-yard first-quarter TD with the first of his two interceptions. Coronado picked up a fumble and rambled untouched 58 yards for a score on Kubasaki&#8217;s next possession.

Despite 119 yards on 17 carries from Kubasaki senior Marquette Warren, the Dragons could only penetrate as far as Kadena&#8217;s 23-yard line on their first possession. Despite that, Kubasaki coach Fred Bales said he saw a "lot of positives" from his team.

"The defense played outstandingly, held the defending Far East champions to 13 points. If the offense does its job, we might have won, but the offense isn&#8217;t where it needs to be," Bales said.

JapanYokota 42, Zama American 6: At Yokota Air Base, Japan, sophomore Derick "Rookie" Seward continued his early-season rushing rampage with 153 yards and four touchdowns on just six attempts, giving him 306 yards on 18 tries this season for the Panthers (2-0).

Tony Presnell ran for a TD and intercepted a pass, and Rainey Daley scored on a 48-yard run in a game that was played with a running clock in the second half after Yokota led 42-0 at the break. The Panthers forced four turnovers, including three interceptions.

The Trojans (0-2), got their lone touchdown on a 75-yard scamper by quarterback Emmanuel Sloan.

Drew Holder tossed a 25-yard TD pass to Ethan Blake and Cheston Nurial-Dacalio ran 6 yards for an Edgren score. Johnell Alexander had 120 yards on 17 carries, giving him 270 on 40 tries this season, plus 80 yards on six returns.

Tyree Hunt scored twice for Kinnick, gaining 306 all-purpose yards, 192 of them on 14 rushes. Jon Bollinger went 6-for-23 for 154 yards, including a 25-yard scoring pass to Dennis Ray.