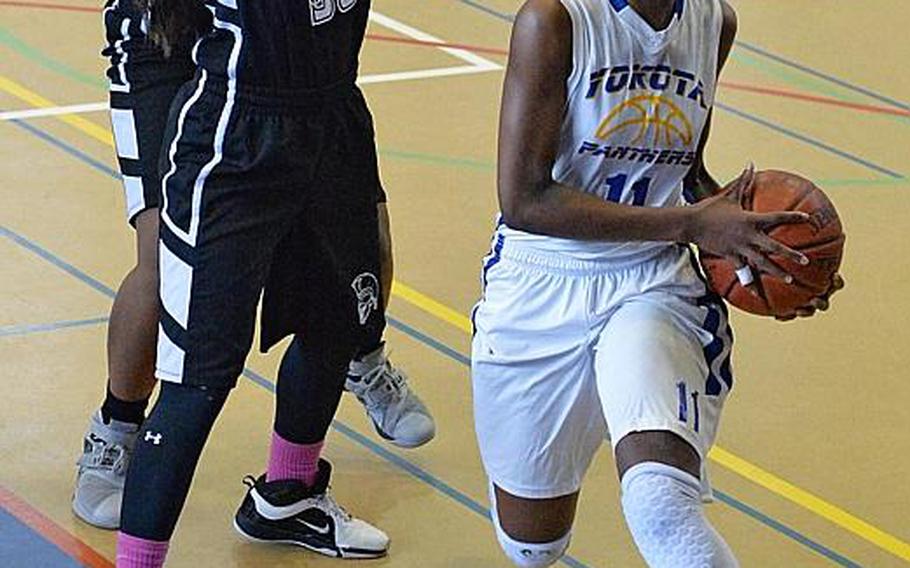 YOKOTA AIR BASE, Japan – Kaliah Henderson knew she was headed into a good situation at the start of the girls basketball season this year.

Yokota headed into the season as the defending Far East Division II champion. And though the Panthers lost most of their interior play, much of last year’s team was still intact.

“I’ve been here a while, so even though I was new to the team, I was familiar with my teammates,” Henderson said.

The freshman guard frequently played with and against many of her future teammates in youth sports growing up at Yokota Air Base in Japan.

“My dad has a civilian job with the security forces here, so I’ve known a lot of the girls here for a long time,” Henderson said. “He always made me go out and play [basketball with] the older kids. It wasn’t like he had to try hard to get me to go, but it was still something he wanted.”

Henderson is very close with her father, Reginald Henderson, and her father’s passion is basketball. “We’ve always shared a love for the game. He’s really taught me everything I know. We’d play one-on-one and he is always out coaching me. It really is the best,” Henderson said.

Last year’s boys basketball Athlete of the Year and Far East Division II Most Valuable Player Jaden Anderson and her sophomore teammate and All-Far East team member Jamia Bailey were among the mentors who helped her through the years, both on and off the court.

“Jaden is like a brother to me,” Henderson said. “He would never take it easy on me, but helped me keep my calm on the court. And Jamia is always able to make bad things seem like good things. When I was intentionally shoved onto the court during the tournament, she kept telling me to not get down and that they just have no way of stopping me other than to push.”

“She’s one of those players you never have to worry about,” Yokota’s coach Kitty Martinez said, adding that Henderson’s athleticism and quickness were key to the redesign of the team’s offensive and defensive strategies this year.

“Last year, we were big. We could play half-court sets, we could protect the rim and clean up the glass. This year, we had fantastic play from our three guards,” Martinez said. “By the end of the season, we were able to stretch the floor some, run fast breaks and play full court press most of the game.”

The season started slowly. Games were tight, turnovers were an unfortunate consequence of changing the team’s philosophy and team leaders were adjusting to new roles. Henderson was out with a broken finger on her right hand. For a right-handed player, this meant only one thing to her father.

“He told me that I would have to learn how to play left-handed,” Henderson said, smiling.

“She never missed a practice, she was always early, did the boring stuff like run drills and keeping stats. Pretty much anything that needed to be done short of practicing with a ball, she was willing to do,” Martinez said.

After practice, Henderson would then work on her southpaw game.

“My dad still had me do everything. I would dribble left-handed. Drive left-handed. Shoot left-handed. I’m still not really good with my left, but at least I’m comfortable going left even in games,” Henderson said.

When her finger healed and she was cleared to play, her new found skillset would create havoc through the Kanto Plain. Along with Bailey and fellow wing, Sarah Cronin, the three guards led a fast-paced offense and an aggressive full-court press.

Henderson’s stats varied from game to game, but she consistently had numbers across the board.

“She isn’t just about points,” Martinez said. “Before each game, she would hand me a little card that she would write her statistical goals on. Points, rebounds, assists, steals, blocks, every statistical goal would be there. I’d just tuck that in my pocket and we’d go over it after the game to see what she accomplished and what she needs to do to achieve her other milestones.”

Henderson’s exploits in Far East have come to a close. The family is moving back to the States later this year.

“I wouldn’t be surprised if they win a third title next year,” Henderson said about her team. “We’ve got a strong program and a good core of players coming back. They’ll still be really, really good.”