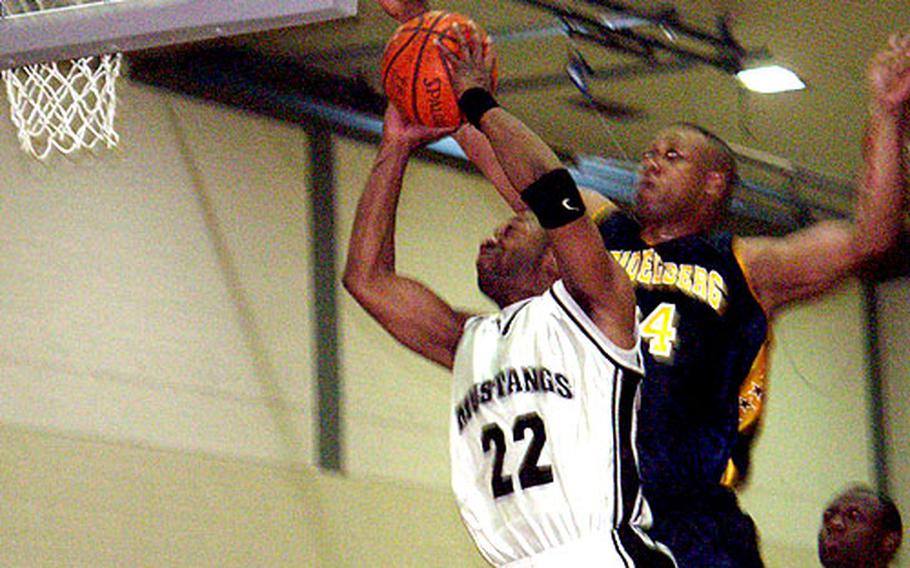 Thirteen months after Mannheim&#8217;s men and women defeated Heidelberg for the 2002 U.S. Army Europe basketball titles, Heidelberg&#8217;s Generals and Lady Generals returned the favor by sweeping the 2003 titles with victories over Mannheim.

Heidelberg&#8217;s women, behind a devastating transition game, defeated Mannheim 72-59, and then watched as the men rallied for a 76-75 victory over Mannheim&#8217;s three-time defending champions.

After building a 54-29 lead with 15:15 to play, the Lady Generals eased off the throttle and saw Mannheim climb back into the game. The Lady Mustangs got as close as 64-57 with 5:43 to go before Heidelberg turned it back on and pulled away.

Heidelberg, on the strength of fanatical rebounding by Tiffany Collins, was about to double the score on Mannheim when it decided to switch to cruise control.

Even in slow-play mode, Collins refused to let Mannheim onto the offensive glass. The Lady Mustangs managed just three offensive rebounds, two of those in the second half.

Mannheim certainly couldn&#8217;t, and was grateful for the respite Heidelberg provided, and a chance at a comeback.

Tonya Weaver, playing with four fouls, scored 17 of her team-high 21 after intermission for Mannheim, which got 17 points from Precious Blackman.

It fell short largely because Heidelberg&#8217;s Katina Miles heated up from beyond the arc. Miles scored 12 of her 15 points in the second half on four straight three-pointers in the first 10 minutes of the period.

DeAnthony Rosser&#8217;s runner in the lane popped out of the basket with a second to play, and with it fell Mannheim&#8217;s bid to win a fourth straight Army Europe crown.

With 5.1 seconds left in the game, Rosser took the inbounds pass from Tiwan Jarret, dribbled to the right side of the lane, floated above the defense and launched a high arcing shot toward the basket. The ball went halfway down before popping out and into the arms of Heidelberg&#8217;s Michael Bruce.

Mannheim fell behind because of the clutch play of Heidelberg&#8217;s interior offense: burly Rodney Bailey and Kenyatta Mack and slender Danny Jones. The trio brought the Generals back from a 75-69 deficit in the final two minutes.

Jones handled the scoring end of the final rally, completing a three-point play to make the score 75-72, then hitting four of five free throws down the stretch for the winning margin.

Earlier, Mack and Bailey took charge after Heidelberg lost All-Armed Forces guard Craig Marcelin to a separated shoulder with 10:55 left in the game and the Generals down 50-48.

Bailey, who finished with 12 points, scored eight of them after Marcelin&#8217;s injury and added four rebounds and an assist during the span to set the stage for Jones.

Marcelin scored 17 points during his 30 minutes on the floor, but his defense was just as vital. Mannheim&#8217;s Will Tompkins buried four three-pointers after Marcelin left on his way to a game-high 32 points.

Assuming there is one. Army athletic officials Ken Wetherill and Tony Lee pledged Sunday to try to arrange an event with the Air Force, even though the annual USAFE tourney was lost to the war last month.