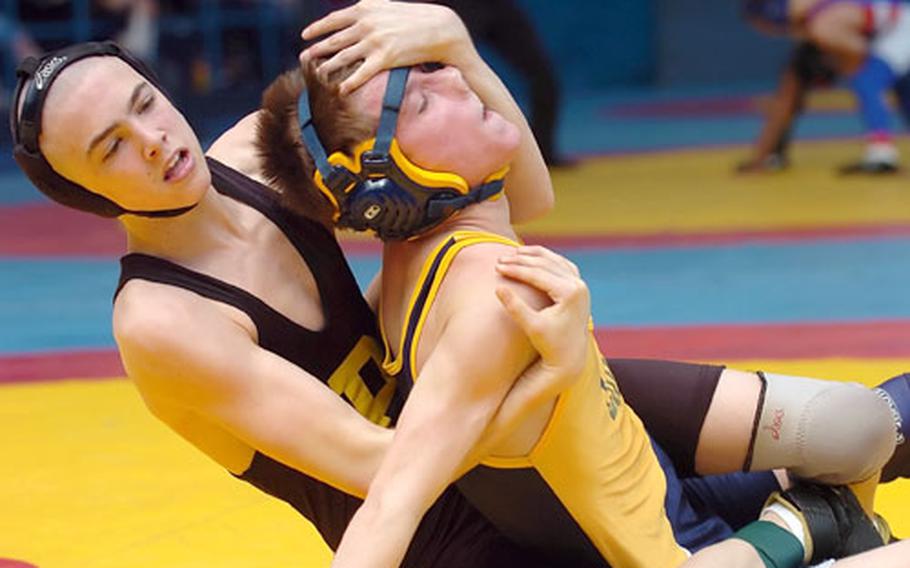 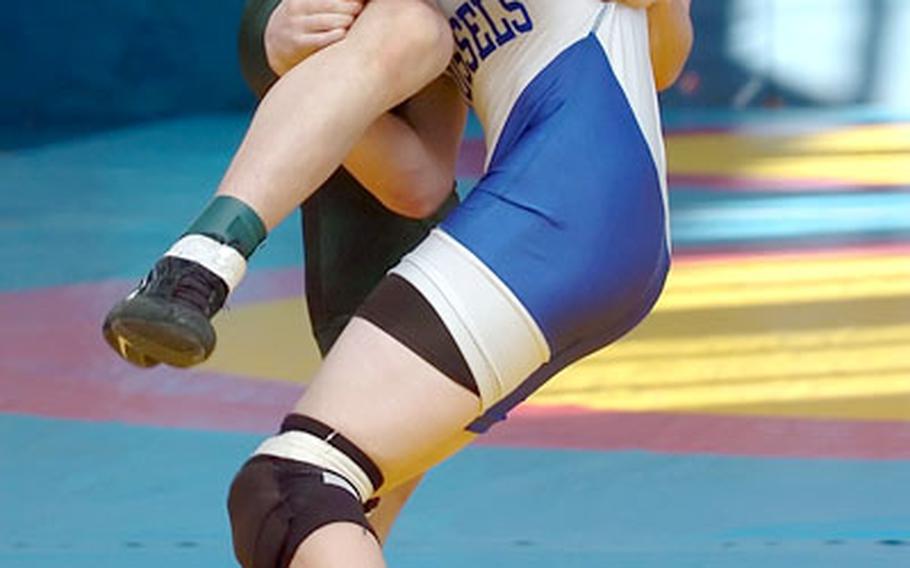 (Detailed results at end of story)

WIESBADEN ARMY AIRFIELD, Germany &#8212; It was no surprise that defending European Division I champion Ramstein advanced 10 wrestlers Friday into the semifinals of the DODDS-Europe wrestling championships.

What was unexpected was that Ramstein&#8217;s total &#8212; four more than any other school after the first day of the two-day tournament &#8212; did not include top-seeded and previously unbeaten 112-pounder Jordan Borino.

Heidelberg sophomore Kuani Tillman, in his first year of high school wrestling, spotted Borino a four-point lead, then rallied for an 11-7 decision.

Tillman, unseeded after a 9-3 regular season, surrendered a four-point move &#8212; a takedown into back-exposure points &#8212; to Borino early, then chose to be in the down position to start the second two minutes. He quickly escaped, then took Borino down twice in the second period to square things at 5 points each.

He then rode two more takedowns and a near-fall in the final period to the victory.

Borino was one of 25 wrestlers who took unbeaten records into the tournament. Twenty-two of them &#8212; led by defending European champions Johnathan Scott of London Central, Gary Vogt of Aviano and Chad Abramson of Wiesbaden &#8212; advanced to Saturday&#8217;s 10:30 a.m. semifinals.

Sheppard, seeded second to David Crow of Baumholder this year at 125, posted a 15-0 technical fall and a 3:05 pin in his two bouts on Friday. His Ramstein teammate Reinhart, wrestling this season at 152 and second-seeded to Elloit Boltz of Heidelberg, pinned Alex Orona of Hohenfels, 16-6 on the season, in just 28 seconds.

The other undefeated wrestlers who failed to advance were Alex Cook of London Central at 171 pounds and Danilo Stewart of Naples at 215.

Cook was pinned by unseeded Joel Smith of Ramstein in 2 minutes and 57 seconds.

Stewart was surprised 7-2 by Chris Garcia, one of six Wiesbaden wrestlers to reach the semis.

Garcia was trailing 2-0 in the second period when he reversed Stewart near the edge of the mat and held him for near-fall points until the buzzer sounded. Garcia resisted Stewart&#8217;s frantic attempts to turn him during the final two minutes, picking up two points when Stewart twice illegally locked his hands.

Patch and Heidelberg also advanced six wrestlers to the morning semifinals. The finals begin at 4:30 p.m. Saturday at the airfield.

Admission is $4 for adults and $3 for students.