Heidelberg's Simmons selected as DODDS-Europe Male Athlete of the Year 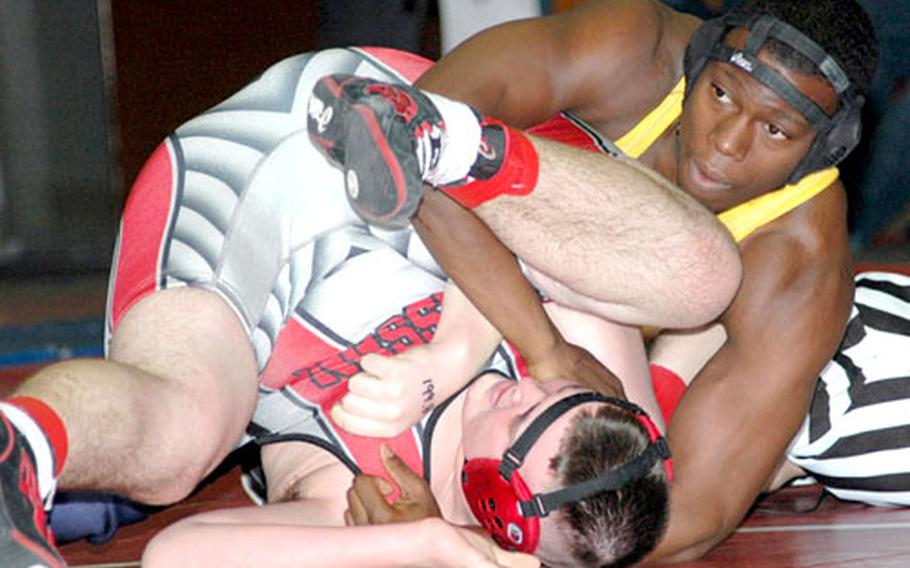 No one doubts the athletic credentials of Heidelberg&#8217;s Brandon Simmons, announced as DODDS-Europe&#8217;s 2006 Male Athlete of the Year Thursday.

In football, he was a first-team All-European as an offensive lineman and linebacker this year and last. He finished third at 215 pounds at the European wrestling championships in February, and was voted field athlete MVP in May after capturing the DODDS-Europe shot put and discus crowns. He also ran a leg on Heidelberg&#8217;s 4x100-meters relay team.

&#8220;He&#8217;s one of the best linemen we ever had in DODDS,&#8221; said Wiesbaden football and wrestling coach Steve Jewell, whose Warriors had to deal with the determined Simmons on the gridiron and the mat for four years, and whose own Chad Abramson was a contender for athlete of the year.

But what stands out just as vividly as Simmons&#8217; athletic prowess is his character. If there were a DODDS-Europe sportsman of the year award, Simmons would qualify for that, too.

Simmons&#8217; work ethic is legendary. Just hours after being informed he&#8217;d been chosen athlete of the year, Simmons was headed to the weight room.

Winning this award might provide some extra motivation, no matter how unneeded.

Simmons made great strides as a wrestler and in the techniques of the shot and discus in high school. But it&#8217;ll be football exclusively at Division II Albany State, Ga., where he will be playing free safety or outside linebacker this fall.

Simmons and Heidelberg part company with each owing a debt to the other.