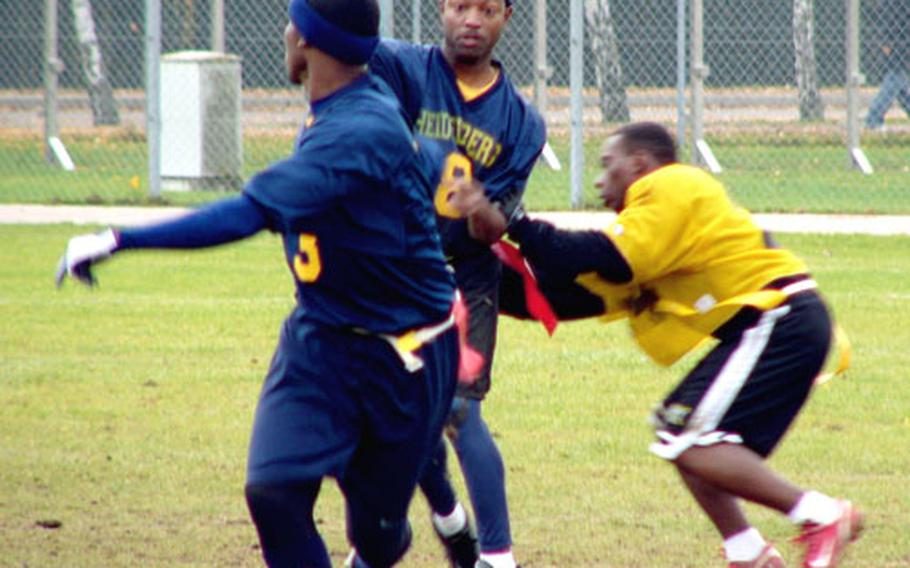 BAMBERG, Germany &#8212; Just over two minutes after he leapt above a pack of defenders to snare a pass that allowed the Heidelberg Generals to eventually claim a 21-20 victory over the Wiesbaden Eagles in Sunday&#8217;s 2006 IMCOM-Europe community-level flag-football championship game, Heidelberg&#8217;s Keithtrick Howard had a question for his quarterback, Jamel Grier.

Howard&#8217;s question was not offered in jest. After his 1-yard run with two minutes left in the game had gave the Generals an 18-14 lead &#8212; their first since the first quarter &#8212; Heidelberg elected to go for a 20-yard, three-point conversion try. Grier bought time by scrambling to his left, then threw back across the field in Howard&#8217;s vicinity.

The points proved indispensable, since Wiesbaden, helped by a personal foul penalty after the conversion and another on a long pass play from Nehemiah Curry to Wilson Dos Santos, came up with first-and-goal on the Heidelberg 10-yard line with 47 seconds left. Curry hit Robert Mathews for the TD, and the Eagles elected to go for two points, from the 10-yard line, and the victory.

Curry lofted a pass to the right corner of the end zone, where willowy receiver Eric Bell rose high in an attempt to catch the game-winner. But Heidelberg defender Courtney Jones, surrendering six inches or so in height to Bell, caused enough of a disruption that Bell couldn&#8217;t hang on.

The close finish mirrored the earlier winners bracket contest between the two, won by Heidelberg 13-12 on Saturday.

Wiesbaden came back through the losers bracket to eliminate Vicenza 36-6 on Saturday and Kaiserslautern 40-21 in Sunday morning&#8217;s losers bracket final.

After Heidelberg scored on an option play from Grier to Howard in the first period on Sunday, Wiesbaden took a 7-6 lead on a run by Kenneth Colbert and Curry&#8217;s one-point conversion pass from the 3-yard line to Markeith Goodwin.

The Eagles went up 14-6 in the third period on a TD pass from Curry to Goodwin and a one-point toss to Colbert before Heidelberg stopped the Eagles on fourth-and-2 from the Generals&#8217; 22-yard line with 4:22 left.

The Generals then mounted the drive that led to the game-winning touchdown. Grier connected with Howard on a 40-yard pass play to highlight the march that led to the Generals&#8217; second European title in the past three years.