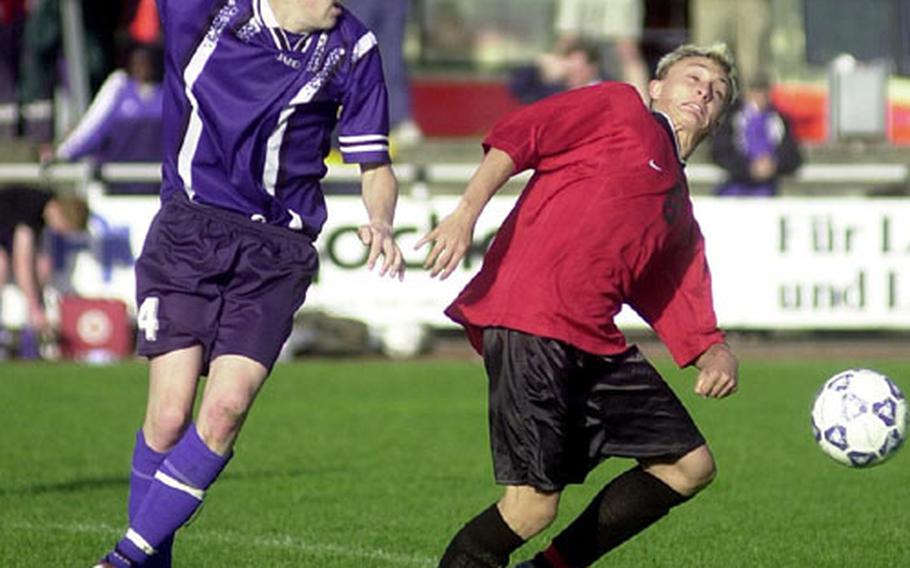 Heidelberg boy&#39;s soccer team will be looking for its seventh straight title this year. Pictured is Heidelberg&#39;s Shaun Conway, left, and Lakenheath&#39;s Luke Croucher fighting for a loose ball during the DODDS Division I championship soccer game last year in Heidelberg, Germany. ()

For the Patch High School girls soccer team, that means trying to extend a string of victories. The four-time defending European Division II champs, led by Tom Manuel, have not lost a game since 1999.

In Heidelberg, the start of the season for boys soccer means that the Lions will be looking for a seventh straight European Division I crown, and their ninth title in 10 years.

If Heidelberg is to make it seven in a row, it will do so under new leadership. Don Cameron, a native of Scotland, will volunteer his time as the Lions&#8217; coach.

But he said doesn&#8217;t expect to tinker too much with success.

The experienced Ramstein Royals are expected to provide the toughest challenge for Heidelberg.

Chief among them are senior midfielders Matt Burns, who was second on the team in scoring last year, and Aaron Duke, a four-year player. Returning goalkeeper Justin Mackey helps anchor the defensive corps.

At Lakenheath in the United Kingdom, coach Garrett Billington also has some senior leadership he can count on in midfielder Michael Hinerth, defender Ian Baker and forward Luke Croucher. Rounding out the Lancers are returnees Colin Geraci, a defender/right wing who&#8217;ll be a force on the overlap; midfield brothers John and Bryce Watkins; and four-year player Phil Morrow, who has honed his game in the English leagues.

Anchoring the Warriors will be all-conference defender Will Swingle and midfielder Paul Cambrook. Wiesbaden also boasts stopper Foster Narty, his brother Sylvester, a speedy right winger, and striker Oafsu Mills, who Jewell says has &#8220;phenomenal ball skills.&#8221; Throw in returning goalkeeper Nate Post and midfielders Steve Jewell and Tavis McLendon, and the Warriors could be primed.

In W&#252;rzburg, Dale Baum&#8217;s Wolves have eight returnees, of which two are three-year players. He predicts that those two, Drew Bivens and Arturo Perez, will be among the best players in Europe by season&#8217;s end.

Closing out the Division I field is the International School of Brussels, which enjoys the private-school advantage of a stable student body with a large contingent of players from soccer-hotbed nations.

SHAPE pulled it together at the right time last spring by coming alive during the tournament after a so-so regular season. If Tony Blasio&#8217;s Spartans are to repeat, however, they&#8217;re going to do so with some new faces. Three-year player Chris Sympson is the lone returning starter.

At AFNORTH, Greg Blankenship has a returning fullback in Zack Norman and &#8220;enough talent to be competitive.&#8221;

Division II also faces a challenge from the private international school Black Forest Academy, which defeated SHAPE for the 2001 title and finished second in the conference race.

Hanau and Vilseck will be looking to improve on last year&#8217;s fourth- and sixth-place finishes, respectively.

DODDS schools are hoping to provide some competition for the private schools which play in the American Schools in Italy League and that have won the last four European crowns in Division III. Last May, Milan ended the American Overseas School of Rome&#8217;s run of three straight crowns.

Vicenza&#8217;s Amy Nay, assisted by a veteran volunteer just in from Belgium, Marko Hakama, has the luxury of returnee aces in goalkeeper Andrew Mayville and his brother, Chas, and Andres Prados, Junior Chase and Andrew McConnell. Joining them is a freshman from Honduras, Fernando Vivas.

Sigonella will be working on becoming a soccer team of substance, while Aviano&#8217;s Lou Lucidi makes no secret of his team&#8217;s plans: &#8220;We&#8217;re trying to build a squad to take to Germany [for the European D-3 tournament].&#8221; The Saints have starters back in Ryan James, Winn McHenry, Jason Cafferty and Harrison Stanley; experience in John Alexio and Joe Peterson; and a promising newcomer in Steven Hudson.

Others with a chance to end the Italian run in the Mediterranean Regional May 15-17 at Marymount are the Ankara boys and Incirlik&#8217;s unisex team.

Baumholder&#8217;s Dave Schwab has 14 freshmen on his 22-man roster, but his seven returning starters, led by All-Europe first-teamer Riki Reyna and 2001 All-Europe performer Rios Harvey, will be role models.

Chris Patterson of Brussels, returning to the team he coached from 1996 to1999, has just four returning players but an abundance of athletic ability. &#8220;We&#8217;re trying to turn pretty good athletes into a pretty good soccer team,&#8221; he said.

Two of those athletes are half of his returnees, wrestling stars Andrew and Bryan Isbell. They&#8217;ll join football placekicker Marc Silos, international student Alex Bodoni and AOSR transfer Kyle Cox in making the Brigands a force to be reckoned with.

At Giessen, Robert Acaba&#8217;s defense is in experienced hands with Greg Reilly in goal, and Carl Pilcher and Dirk Toombs in front of him, along with halfbacks Josh Rebuck and Daniel Newport. Acaba will entrust his scoring to a pair of newly arrived strikers, Anthony Moore and Rob Thome.

Menwith Hill, which always plays levels above its enrollment figures, will anchor itself on senior captains Chris McKinney, a midfielder, and Jeremy Volkel, a defender, said coach Leland Walbrook. Two other seniors, Michael Bell and Patrick Huff, and a trio of juniors, keeper Phillip Greenwalt, defender Keith Joseph and midfielder Gavin Massa, along with newcomer Jason Pollack, will lead the Mustangs into the Division III-North Regional in May, where they&#8217;ll take on Brussels, Alconbury and London Central along with Lajes, Rota and Iceland.