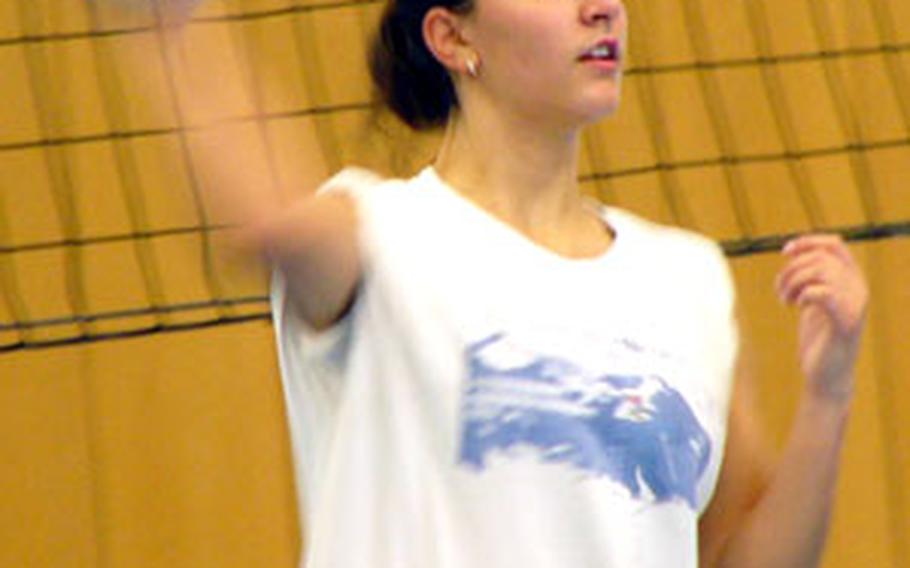 Heidelberg senior setter Maddie Havenar is often a blur on the volleyball court, praised by her coach for her speed and athleticism. (Rusty Bryan / S&S)

HEIDELBERG, Germany &#8212; Don&#8217;t call Heidelberg senior setter Maddie Havenar a beginner just because she didn&#8217;t play volleyball last year. It was only a break in service.

She did more than try. To her astonishment, she ended up as the team&#8217;s starting setter.

Not this year. Heidelberg volunteer coach Jeralyn White, a former NCAA Division I performer at West Point, saw more than just back-row grit and athleticism in her Havenar.

White added that Havenar quickly mastered the intricacies of her position.

That she has been playing soccer since she was 7 hasn&#8217;t hurt Havenar&#8217;s volleyball skills.

Havenar said that it&#8217;s taken time for her to become acquainted with the strengths and preferences of her teammates.

If Tuesday&#8217;s practice was any indication, Havenar has learned her lessons quickly. Nearly every Havenar set during drills drew a &#8220;good set&#8221; comment from White.

Heidelberg&#8217;s young squad is coming off a straight-sets loss to defending Division I champion Ramstein, but rather than licking their wounds, the Lady Lions are relishing their growth as a team.

Win or lose, Havenar thinks her return to volleyball will pay dividends when soccer season rolls around next spring.