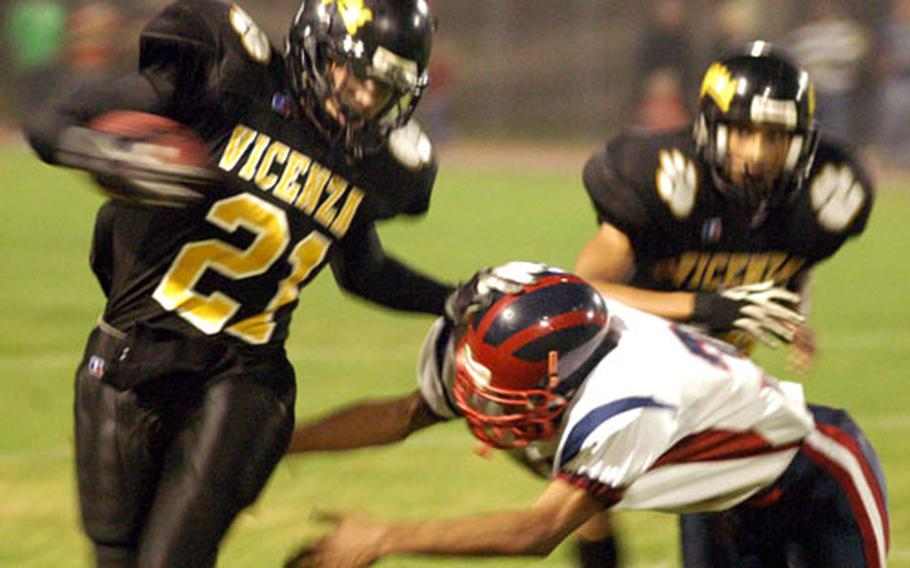 Vicenza&#39;s Kyle Kaus stiff-arms an Aviano opponent while rushing for a few of his 90 yards Friday night in the Cougars&#39; 45-7 romp over the Saints. (Kent Harris / Stripes)

The Aviano Saints lived up to that tradition Friday, graciously handing out "gifts" as Vicenza cruised to a 45-7 victory on homecoming night.

Aviano only had possession for a few minutes when quarterback Myron McRae lost control of the ball while rolling out. Vicenza&#8217;s Benjamin Grice scooped it up, ran 20 yards into the end zone untouched and the Cougars started to light up the scoreboard.

"That was a nice bounce," Vicenza coach Adam Ridgley said. "Things go your way sometimes, and then things get out of control."

Aviano, which fell to 1-2-1 and saw its playoff hopes dashed with the loss, actually had control of the ball during the opening quarter more than Vicenza did. But several drives ended with turnovers.

On Vicenza&#8217;s next possession, Marcus Morton ran straight up the middle and wasn&#8217;t stopped until he had covered 50 yards to the Aviano 5. Cougars quarterback Kola Awe scored on the next play.

Awe was back in the end zone again a few minutes later after sprinting 75 yards for a score on the first play on the Cougars&#8217; next offensive drive.

It was 22-0 at the end of a quarter, though Vicenza, 3-1 on the season, had run only six offensive plays.

A field goal in the third period made it 39-0 before Aviano got on the scoreboard as McRae snuck into the end zone from a yard out. Reserves from both teams finished out the final quarter.

Awe had 102 yards on the ground for the Cougars, while Kaus piled up 90 more. Morton carried the ball three times for 82 yards.

Alex Gary had 129 yards for Aviano. Jamal Tuck caught five passes and made more than half of his team&#8217;s tackles on defense.