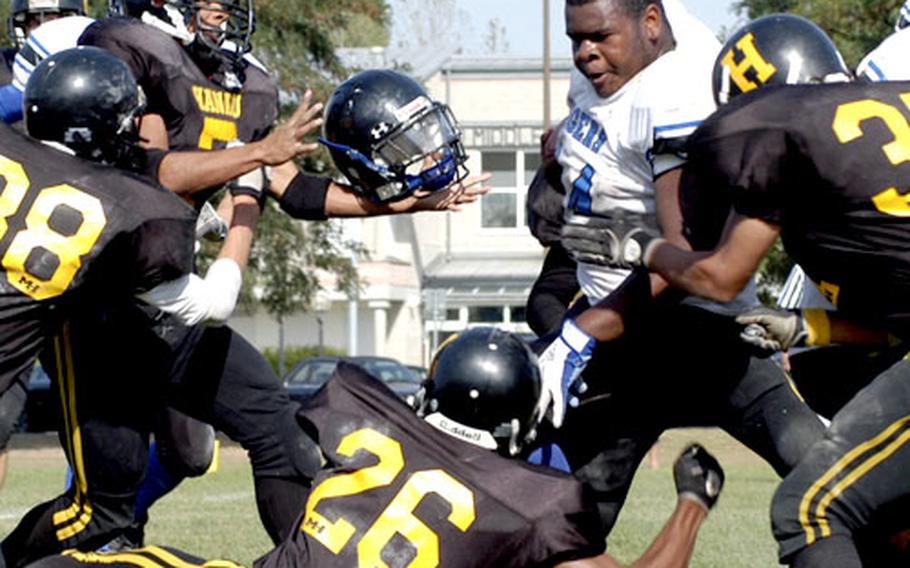 Hohenfels running back Brandon Merriweather, 44, loses his helmet as he drags Hanau defenders over the goal line in the third quarter for his team&#39;s only points in a 31-6 loss on Saturday. (Matt Millham / S&S)

Hohenfels running back Brandon Merriweather, 44, loses his helmet as he drags Hanau defenders over the goal line in the third quarter for his team&#39;s only points in a 31-6 loss on Saturday. (Matt Millham / S&S) 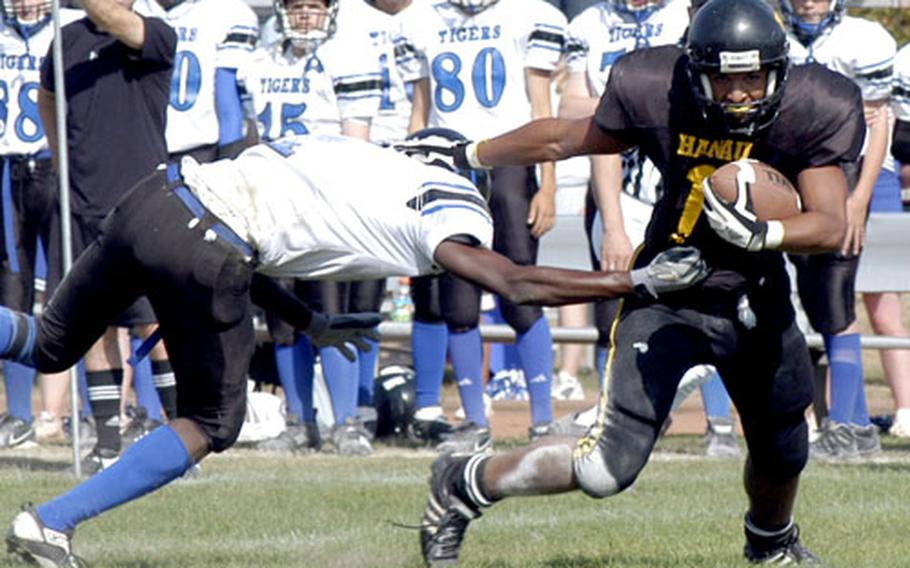 Hanau&#39;s Corey Lane shakes off a tackler in the first half of Hanau&#39;s 31-6 win over visiting Hohenfels Saturday. Lane scored two touchdowns after being moved from tight end to running back. He also had a successful PAT kick. (Matt Millham / S&S) 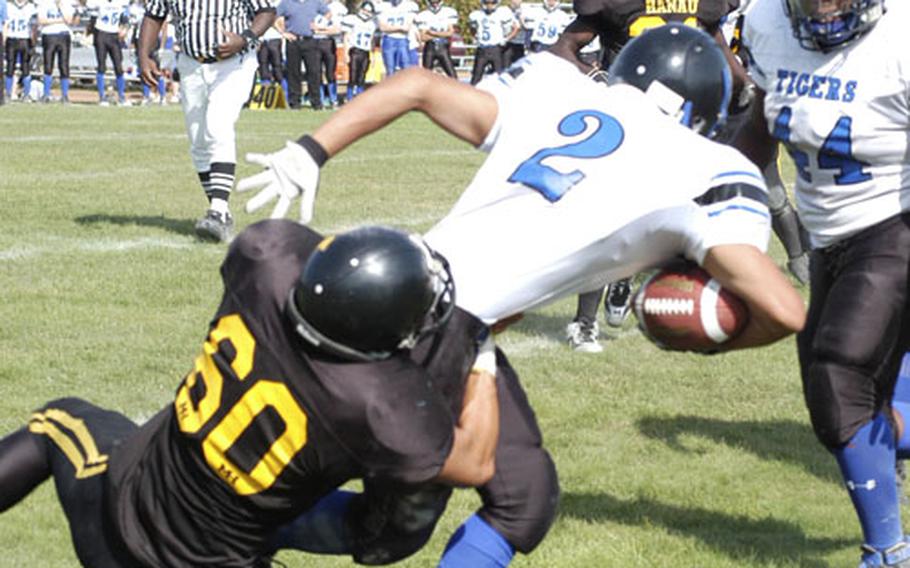 Hohenfels&#39; Nate Apodaca struggles to stay up against Hanau&#39;s Jerrell Banks in the third quarter of the Tigers&#39; 31-6 loss to the former Division II champs on Saturday. (Matt Millham / S&S) 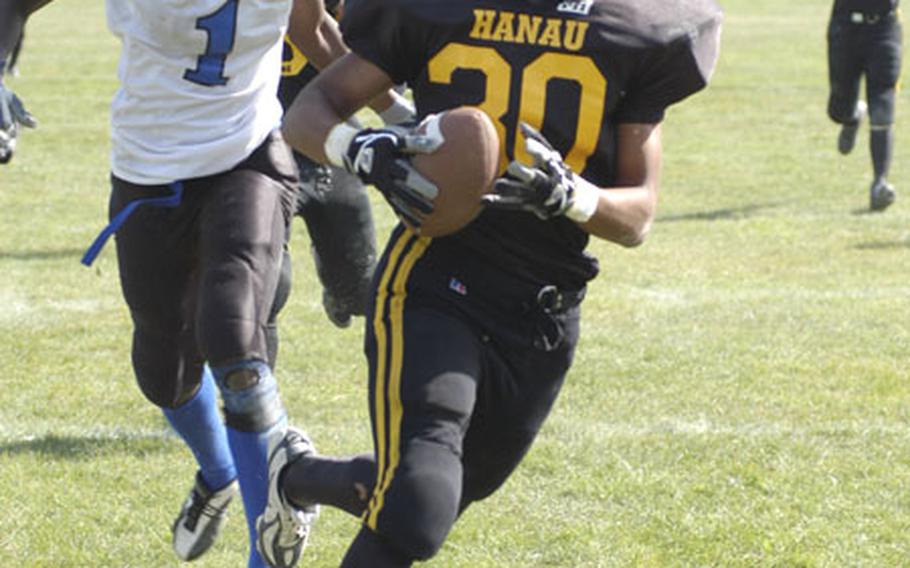 Hanau senior Michael Lewis returns the opening kickoff of the second half 70 yards for a touchdown, putting the Panthers up 19-0. (Matt Millham / S&S) 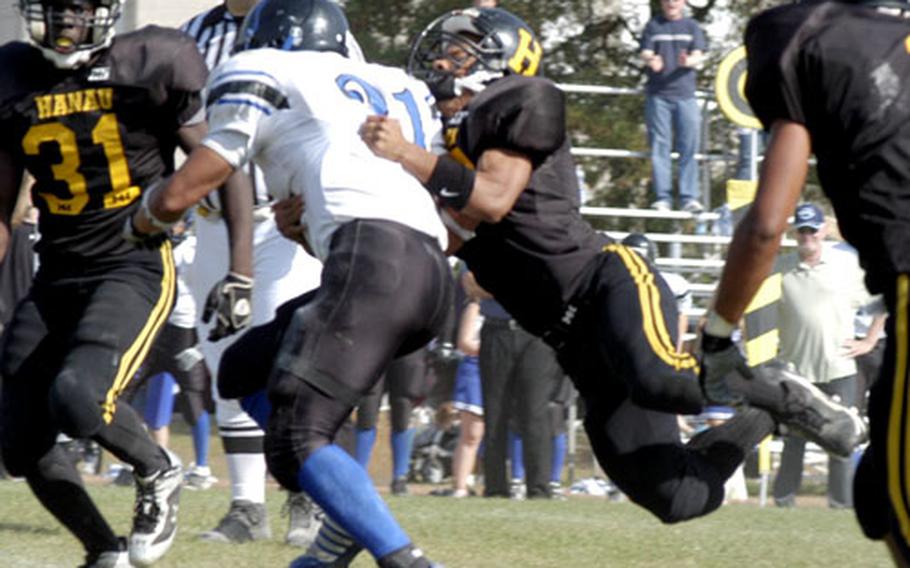 Hohenfels&#39; Sung Byon, 21, takes a Hanau defender for a ride Saturday. Byon had four carries for 30 yards before he had to be taken off the field by paramedics in the second quarter with a suspected knee injury. (Matt Millham / S&S)

Cassou changed up key positions Saturday for the Panthers in the matchup of 2005 European champions. The most notable change was moving tight end Corey Lane to running back to bolster Hanau&#8217;s run-first offense.

Lane responded by opening Hanau&#8217;s first offensive series after a Hohenfels fumble with a 13-yard run. Another carry punched the ball inside the 2, setting up his fourth-down touchdown run.

Hanau quarterback Keven Faust ran in Hanau&#8217;s second touchdown, and Lane&#8217;s extra point put Hanau up 13-0 at the start of of the second quarter.

The Panthers then opened the second half with Michael Lewis&#8217; 70-yard TD run for a commanding 19-0 lead.

This week it was Hohenfels&#8217; offense that had problems with penalties and costly errors. Although they threatened several times, the Tigers&#8217; only score came on senior Brandon Merriweather&#8217;s 2-yard run. The 240-pounder lost his helmet but refused to go down.

The TD cut the gap to 19-6, but that was as close as the Tigers got. Hanau tacked on two final scores on a TD run by Lane and one by Gabriel Williams.

Hohenfels lost a key weapon when Sung Byon was hit hard while running the ball and was taken to a waiting ambulance for a suspected knee injury near the end of the first half.

The victory left Hanau, last year&#8217;s Division II champ now playing in D-III because of a sharp drop in enrollment, and defending D-III champ Hohenfels at 1-1 overall and in III-South.

Lewis said the Panthers needed the win to stay in the race, and to keep a winning streak alive.