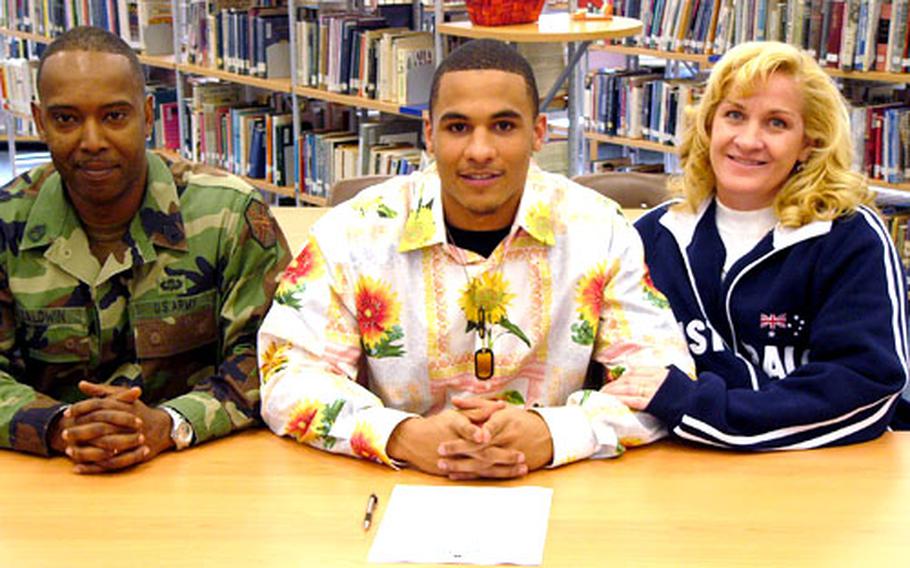 HANAU, Germany &#8212; Even though most Division I college football scholarships were signed, sealed and delivered two months ago, Malcolm Lane plucked a plum of an offer last week.

Lane, a two-time, two-way All-Europe selection from Hanau High School, signed a letter of intent to play for the University of Hawaii and has accepted a full scholarship.

The signing concluded a frantic winter of buttonholing anyone who&#8217;d listen.

However, Dan Miles, a Hohenfels-based coach for Team USA Football, used his connection with University of Washington coach Tyrone Willingham to get a copy of Lane&#8217;s DVD into the coach&#8217;s hands, Lane said. Although Willingham had already used his scholarships, Lane said, he passed the DVD on to Jeff Reinebold, an assistant at Hawaii.

Lane, who was also a guard on Hanau&#8217;s basketball team, said Reinebold called him around the end of the season.

Lane was sure enough about the offer, however, that he elected to skip his senior season in track &#8212; in which he&#8217;d be a heavy favorite to win a European sprint title or two &#8212; to concentrate on getting ready for college football.

Lane&#8217;s confidence was vindicated when Hawaii made its offer.

Lane, at 6 feet 2 and 185 pounds, played wide receiver and defensive back last season. Lane said he doesn&#8217;t care on which side of the ball he plays at Hawaii.