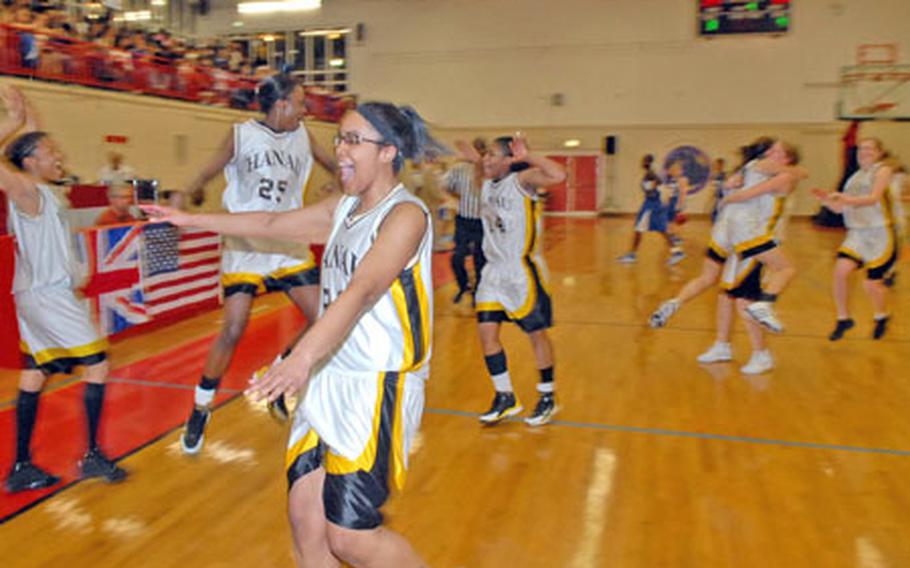 Jehan Bostick, foreground, and her Hanau Panthers teammates celebrate their 29-28 win over Rota in the Division III girls championship game at the DODDS-Europe basketball finals in Mannheim, Germany, on Saturday. (Michael Abrams / S&S)

MANNHEIM, Germany &#8212; The Hanau Panthers led by 11 points at halftime in the Division III girls championship game and were cruising.

But that didn&#8217;t mean much Saturday at the DODDS-Europe basketball tournament. In an earlier game, Vilseck lost a 14-point halftime lead and dropped the Division II title game to Naples.

So Hanau coach Michael Lee Hunt wasn&#8217;t relaxing. There was a lot of game to be played against Rota before the title was settled.

Rota did, taking the lead in the fourth quarter before Hanau rerecovered to pull out a 29-28 victory. Latanya Wilson, who scored a game-high 17 points, made a free throw with 15 seconds to go for the win.

Wilson scored 11 points in the second quarter, and capped a 13-0 run with a fast-break layup, taking a long outlet pass from Emily Morris. She almost made it more dire for Rota at halftime when she back-rimmed a long three-point try at the buzzer.

&#8220;All we needed to do was knock a couple shots down, start whittling away and getting back into the game,&#8221; Jacobs said.

Wilson made a free throw, Jehan Bostick put back an offensive rebound and Lisa Fontanez, cold most of the game shooting from the right wing, swished a 15-footer with two minutes left to move Hanau back on top, 28-26.

With possession in their offensive zone and only 37 seconds to go, Hanau seemed in good shape. But Rota&#8217;s Stephanie Shapiro stole the inbounds pass, and Edwards followed up a missed shot with another offensive rebound and basket to tie the game at 28.

This time it was the Panthers who came through. Wilson was fouled, and her free throw proved to be the winning point.