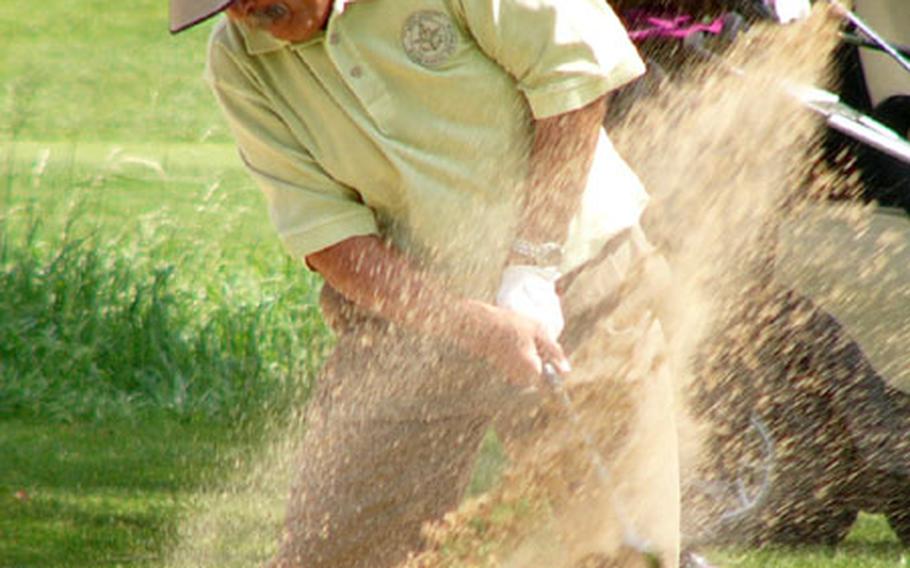 Seniors runner-up Celio Cedeno of Rota, Spain, exits a greenside bunker on the 18th hole Thursday. Cedeno, who recorded the second ace of his career on the 185-yard No. 6 during Tuesday&#39;s first round, endured a round of 97 on Thursday to finish the 54-hole event with a 269. (Rusty Bryan / S&S)

Hallauer capped a comeback from an 83 he shot in Tuesday&#8217;s first round.

Hallauer figured it out well enough that on Wednesday he posted the best round of the tournament, an even-par 73 that included five birdies and moved him from seven strokes back to only one behind going into the final round.

Smith, who led after two rounds, birdied the first two holes Thursday to expand his lead to three strokes. Despite a bogey on No. 3, Smith led by four shots after Hallauer double-bogeyed the par-3 hole.

The par-4 12th hole resulted in a four-stroke swing when Hallauer made birdie and Smith shot a triple bogey. Smith, the Stuttgart club champion, got two of those strokes back with consecutive birdies on 14 and 15, but Hallauer put the match away with a birdie on 18.

Stanley, one of five golfers who started the final round within five shots of the lead, shot 80 on Thursday to finish third at 240. He won a best-round tiebreaker with Rogelio Renteria, who also finished at 240 after an 83 on Thursday.

It wasn&#8217;t nearly as close in the seniors division for golfers 50 and older. Eric Goins of Grafenw&#246;hr, ahead by 13 strokes going into the final round, fired his second consecutive 79 to finish at 19-over 238. He credited the irons he used exclusively after the first round for his 31-stroke victory over Celio Cedeno of Rota, Spain.

Also enjoying a cakewalk to a championship was women&#8217;s champion Sue Hamilton of Stuttgart. She shot a 301 and won unopposed.