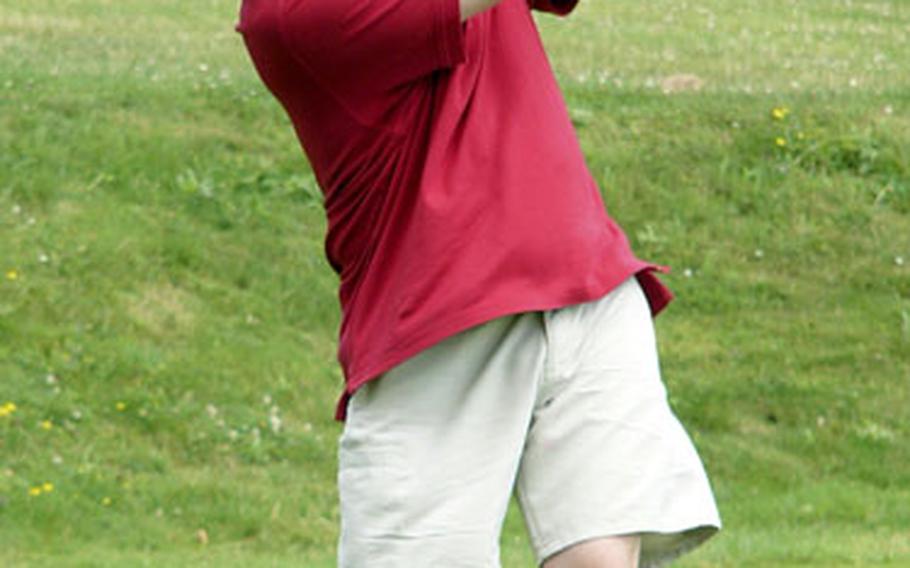 Three-time Army-Europe champion Jeffrey Hallauer of Heidelberg, Germany, shot a 73 on Tuesday and a 76 on Wednesday to win the tournament by 17 strokes. (Rusty Bryan / S&S)

Hallauer, who led by eight strokes going into Thursday&#8217;s final round won by 17 strokes over runner-up Michael Colvin of Wiesbaden.

The strong finish seemed important over Thursday&#8217;s front nine, as Colvin posted three birdies en route to a 34 that brought him four strokes closer to Hallauer at the turn. He posted a 41 on the back nine, however, to finish well back.

Lavern Renter, who trailed by eight shots going into the final 18, fired an 85 on Thursday to finish third at 242.

He finished birdie-bogey-par after the rain.

Hallauer, who collected four birdies in a round of 73 on Tuesday, said positioning is vital on the multi-sloped Rheinblick layout.

Rheinblick is the third course Hallauer has mastered in his title runs. He won at his home course at Heidelberg in 2004 and Stuttgart in 2005.

No one went toe-to-toe with Hallauer this year, and even the 188-yard par-3 No. 8, which Hallauer double-bogeyed on Tuesday and bogeyed on Wednesday, gave up the struggle and surrendered a par to Hallauer on Thursday.

Dwight McKinney of Wiesbaden enjoyed as big a runaway in the seniors field for golfers 50 years and older as Hallauer did in the open, outpacing fellow Wiesbadener Steve Weissenberger by 17 shots. McKinney posted three front-nine birdies on Thursday en route of a 78 and a three-round total of 236.

Another Wiesbaden golfer, Shannon Walsh, prevailed in the two-player women&#8217;s event. She posted a 97 on Thursday to finish at 283, 45 shots ahead of another Wiesbaden entrant, Gabriele Weissenberger.