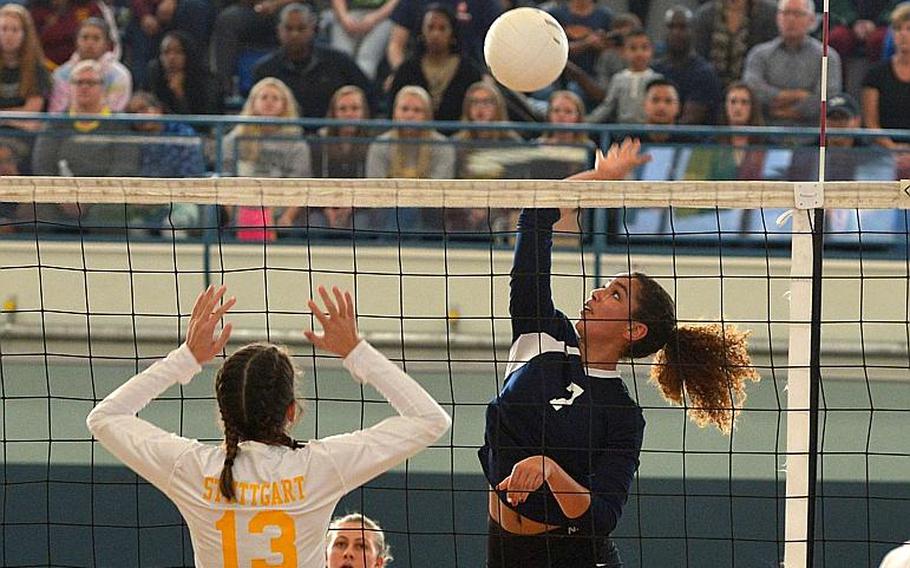 Lakenheath's Maya Hagander gets ready to make a return against Stuttgart defense of Jules Greenberg in the Division I title game at the DODEA-Europe volleyball finals in Kaiserslautern, Germany, Saturday, Nov.4, 2017. Hagander has been selected as the Stars and Stripes Europe Athlete of the Year for volleyball. (Michael Abrams/Stars and Stripes)

Maya Hagander embodies all of the attributes of an elite volleyball player, even the ones that seem to contradict the other ones.

Hagander is a star who can do just about everything on a court but is happy to stay out of the way when a teammate has a better play on a ball.

She strives to “build everyone up” on her team in part by confronting and correcting mistakes.

And on a team without formal captains, she is an unequivocal leader.

Now, Hagander’s season ends with one last paradox. By meshing her talents seamlessly within the system of a championship team, she has earned a prestigious individual award as the 2017 Stars and Stripes volleyball Athlete of the Year.

The junior star of the DODEA-Europe Division I champion Lakenheath Lancers has developed a nuanced theory of leadership over her three-year career.

“Leaders take different roles other than just being in charge,” Hagander said.

After two years of rising stardom in DODEA-Europe volleyball circles, Hagander was ready to take on the role of a leader this fall for a Lancer team that was clearly ready for its title shot.

“I know every team needs one,” Hagander said. “So I try to be that for the girls.”

For Hagander, leadership comes with responsibility.

But it also demands restraint.

“I definitely believe everybody takes care of their position,” Hagander said. “Take care of yourself, and trust that your teammates will take care of themselves, and everything works.

“You have to have that trust between players.”

The Lancers were wise to place their trust in Hagander as they eyed an elusive championship this fall. Hagander produced close to three kills and two aces per game in the regular season, and capped a stellar tournament with a series of key plays in the Lancers’ title-clinching sweep of two-time defending champion Stuttgart.

After starting the year with what Hagander described as “uneasy confidence,” the decisive championship win was an unmitigated triumph for the Lancers, and the fascinating star that led them there.

“Maya is an exceptional player who really brought everything together this year,” Lakenheath coach Dennis Ullery said.