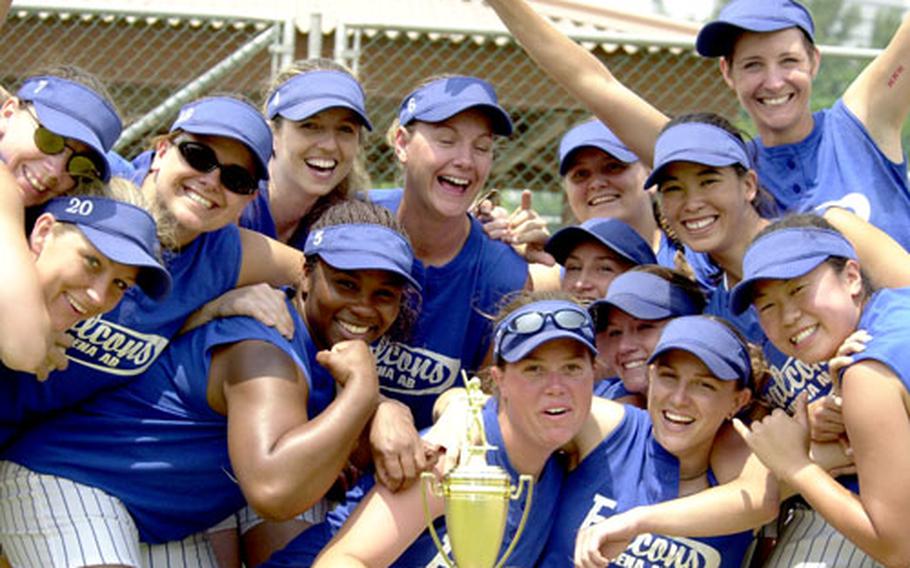 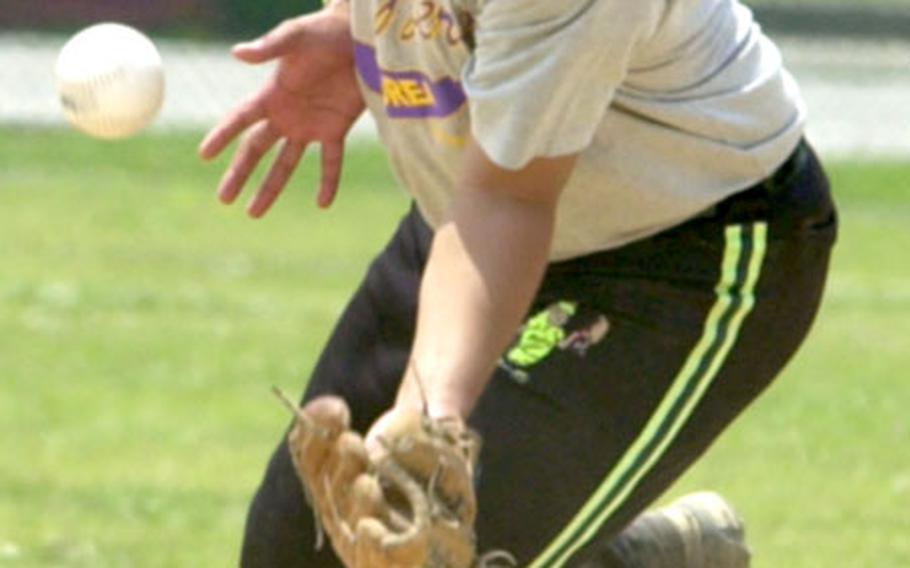 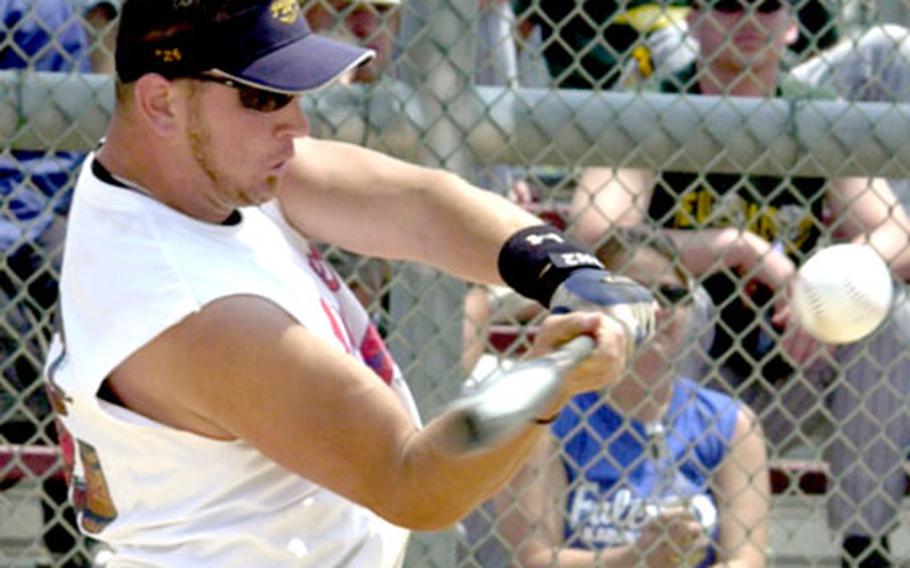 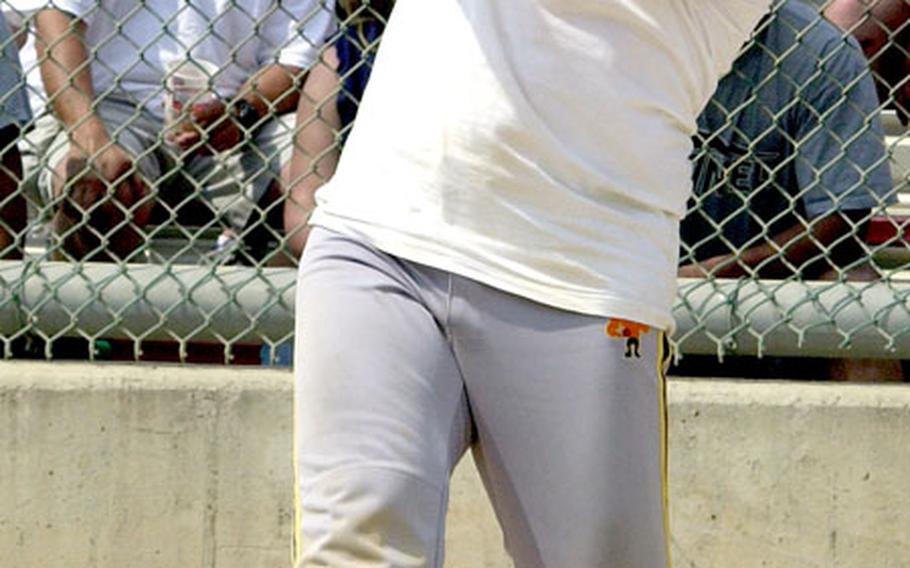 Roger Day of Heat 3N2 of Korea and Taiwan goes the opposite way for a base hit. (Dave Ornauer / S&S) 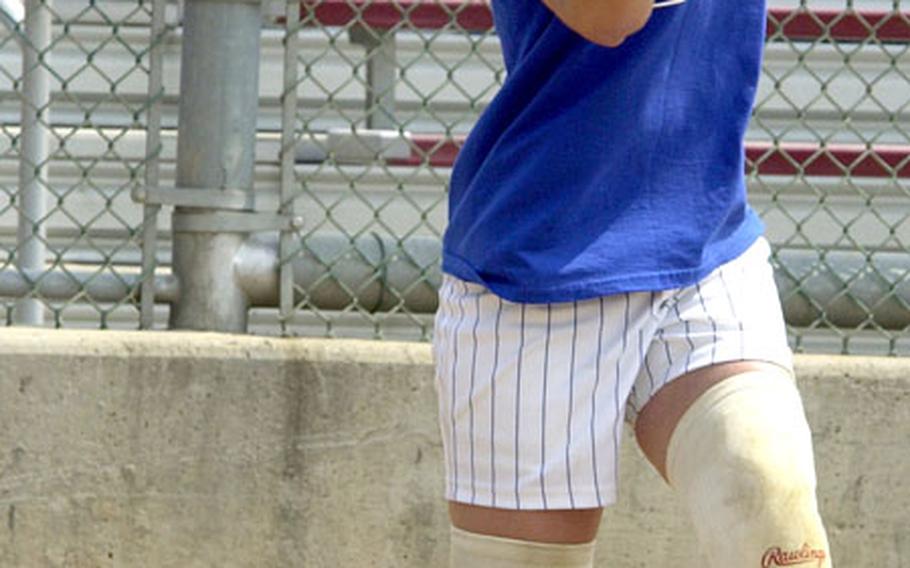 YONGSAN GARRISON, South Korea &#8212; As a company-level pickup team in the 1990s, the International Guzzlers of Korea used to make some fine feasts for the Pacific&#8217;s open and post-level powers that regularly counted on them as an automatic victory.

Look at them now.

Since 2001, the Guzzlers have reached the finals of the Pacificwide Open Softball Tournament four times and won it three times, the latest on Monday, when they came from the loser&#8217;s bracket to beat Heat 3N2 20-18 and 20-4.

Equally sweet was the first Pacificwide tournament women&#8217;s title won by a Kadena Falcons base squad since the mid-1990s. Coach Al Lozano and four returnees from the Kadena TPS Diamonds team that won the title in 2003 combined with a gaggle of first-year players for a 10-3 triumph over Red Fox, a Korean team that has reached five straight finals.

Veteran Guzzlers pitcher Billy Laxton had gone 0-for-3 in the first championship game when he stepped to the plate in the top of the seventh with two outs and Al Aspen at second base.

Laxton rapped a single up the middle to score Aspen, helping the Guzzlers score five runs in the inning. Mike Sharp added some insurance with a three-run home run, his second of the game.

Costello viewed it as Laxton providing the fireworks and Sharp lighting the match.

The Guzzlers crushed five home runs in the first game, with Sharp finishing 4-for-5 with four RBIs. Jim Perez and Alton Hufstetler each belted three hits and drove in three runs, Jon Nicholson was 2-for-4 with a homer and five RBIs and seven Guzzlers had three or more hits.

The sixth and seventh spots in the order carried Heat 3N2. Roger Day was 5-for-5 with four RBIs, and Mark Kim 4-for-5 with three RBIs, but it was not enough.

While the first game featured three ties and three lead changes, the Guzzlers left nothing to chance in the clincher, ended after four innings by the 15-run mercy rule.

The first 13 batters reached base, and the Guzzlers sent 17 batters to the plate in a 12-run first inning, highlighted by Hufstetler&#8217;s three-run homer.

The Kadena Falcons, meanwhile, came into the Pacificwide with just two full practices.

But after opening the tournament with a 9-8 pool-play loss to Red Fox, the Falcons didn&#8217;t lose again.

&#8220;The defense really came on the last two games. The outfield was superb, the shortstop [Melissa Hayen] knocked down everything and first baseman [Bekah] Tinter was unbelievable. Teams didn&#8217;t know where to hit the ball.&#8221;

The Falcons made just one error, while All-Armed Forces pitcher Twyla Sears didn&#8217;t walk a batter.

Still, Kadena trailed 3-1 entering the fourth inning before Tinter doubled in a run and Shannon Thomas tied it with an RBI single.

Then the Falcons sent 12 batters to the plate in the fifth. Kayt Warner&#8217;s two-run triple broke the 3-3 tie and gave the Falcons the lead for good. Mandy Snyder also tripled in two runs.

Tinter&#8217;s spectacular stop of a hot shot at first base in the fifth snuffed out a potential rally, and Sears retired the last eight batters.

&#8220;They had that one big inning and we didn&#8217;t hit. That was the difference,&#8221; said Red Fox coach Carlee Keys, a civilian working for 2nd Infantry Division sports.