Guzman keeping eyes on the prize 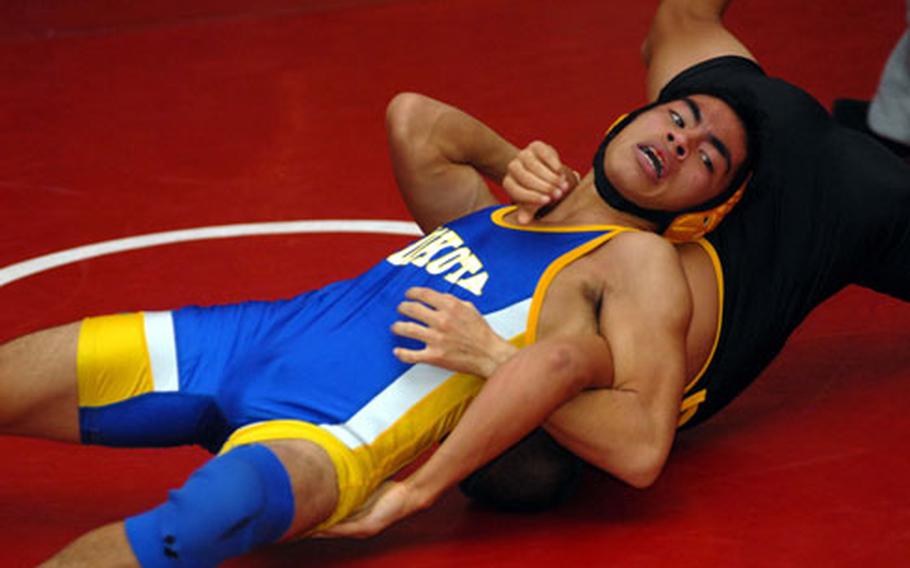 Yokota’s Nick Guzman applies a chest crusher to J.C. Henderson of Kadena during the 122-pound championship bout in the Nile C. Kinnick Invitational "Beast of the Far East" Wrestling Tournament at Yokosuka Naval Base, Japan, on Jan. 10. Guzman, who earlier that same day upset three-time Far East champ Scott Wood of Kubasaki, pinned Henderson in 3:36. Guzman says despite his victories over Henderson and Wood, that doesn’t install him as an automatic favorite to win the Far East Tournament title. (Dave Ornauer / S&S)

But in no way is 122-pound Yokota senior Nick Guzman counting himself as an automatic front-runner for the title in this week&#8217;s Far East tournament at Okinawa&#8217;s Camp Foster Field House.

No doubt his record this season speaks volumes.

He won the the title in the Kanto tournament at St. Mary&#8217;s International School, plus took his division in three DODDS-Japan in-season tournaments and his five Kanto Plain dual-meet bouts. His only two losses came at 129 pounds in the All-Japan Invitational in December at Yokota.

Certainly, it&#8217;s his best ledger in his three seasons with the Panthers; his freshman and sophomore seasons ended in undistinguished Far East tournament finishes, sixth in 2006 and no placement in 2007.

Part of his renaissance this season can perhaps be traced to his one high school year spent away from Japan, and what he learned there.

Last year, his mother Marie, a civilian personnel specialist, transferred to Hickam Air Force Base, and Nick wrestled as a junior at Adm. Arthur W. Radford High in Hawaii. There, he says he learned some important lessons about his mental approach to the mat.

"There&#8217;s a lot more competition" in Hawaii, where he placed eighth on Oahu and didn&#8217;t place in the state championships.

The big key, he says, is not letting his competitive level fall to that of a lesser light whom he might have already beaten. "You can&#8217;t lower yourself," he said. "You have to work as hard as you can."

The elder Guzman transferred back to Yokota after one year.

"We lucked out," Yokota coach Brian Kitts said. "Not just getting him back to wrestle. It&#8217;s just great to have him around. I taught him in the sixth grade. He was there for my wedding. A great young man."

"It would be nice if there was more competition here," Guzman said. "But here, I can hang out with my team. Here, the school, all my friends, the team, we have a different kind of unity. Everyone here is so close. I&#8217;ve been here so long, it feels like home."

On the mat, Guzman began picking off one noted foe after another:

In that same event, Guzman pinned J.C. Henderson of Kadena in 3:36. Henderson later beat Wood twice in last month&#8217;s Rumble on the Rock.

Then in the Kanto tournament, Guzman eked out his toughest decision of the season, 5-4, 8-4 over St. Mary&#8217;s Patrick Martin.

He&#8217;s well aware that more tough competition lies in wait at Far East, since Wood and Henderson would love nothing more than avenge their defeats at "Beast."

Anticipation and good counter moves could be key to knocking off Guzman, Wood said. "Just be quick. Try to predict what he&#8217;s going to do. Take the initiative. Try to wrestle your match and not his. Don&#8217;t sit back and watch," he said.

All of that may be easier said than done, said senior Ryan Christianson of the American School In Japan; he got pinned by Guzman in 1:47 in a Kanto Plain regular-season dual meet on Jan. 14.

"The smoothness of his technique, going from move to move," Christianson said of the difference between Guzman the sophomore and today&#8217;s Guzman.

"I was thinking about it the other day" after the Kanto meet, Kitts said. "I have a good feeling about it. I think we can win it."