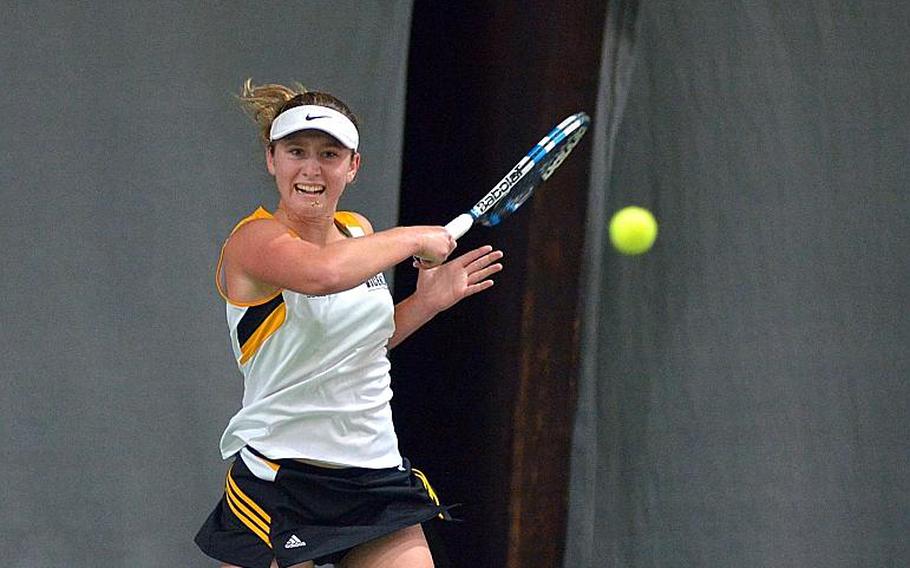 Vicenza's Catherine Gulihur makes returns a shot against Wiesbaden's Charlotte Kordonowy in the girls singles final at the DODEA-Europe tennis championships in Wiesbaden, Germany, Saturday, Oct. 28, 2017.Gulihur has been named Stars and Stripes' Europe girls Athlete of the Year for tennis (Michael Abrams/Stars and Stripes)

It didn’t take long for Catherine Gulihur to make an impact on DODEA-Europe tennis.

The newly arrived senior ace of the Vicenza Cougars joined the organization’s elite immediately upon her debut, playing her way to a top seed in October’s European tournament. Once there, she stormed through preliminary play and the semifinals, dropping just one game in six matches, and seized the 2017 DODEA-Europe girls singles championship with a straight-set 6-2, 6-0 triumph.

The freshly crowned champion plans to celebrate her remarkable success the same way she earned that success in the first place.

“Now that the season is over I can get some more hours on the court,” Gulihur said.

That’s an unsurprising response for the coaches, teammates and opponents that have gotten to know Gulihur, who had been homeschooled before enrolling at Vicenza.

That’s the next phase for Gulihur, who has been scouted by high-level NCAA programs and competes on the European pro circuit. While full of possibilities, that future has yet to take shape.

“It’s a tough decision, and looking forward I just have to find the balance between academics...and getting enough time on the court,” Gulihur said.

Remarkably, Gulihur found time for another worthy endeavor this fall even as she competed for a European championship, adjusted to a new school and planned ahead for a bright future. She was also a good teammate. Gillett said Gulihur was “an asset” to the program as she helped less accomplished players with “tactical instruction,” all while remembering to have fun with the experience.

“While normally Catherine is intensely focused on her game, she was able to relax and enjoy herself at practice each day with the team,” Gulihur said.

Even with just two short months to record it, Gulihur’s DODEA-Europe legacy is secure

“I have coached tennis for 16 years in DODEA and have seen a few highly successful tennis players,” Gillett said. “I have not coached an athlete of this level,”