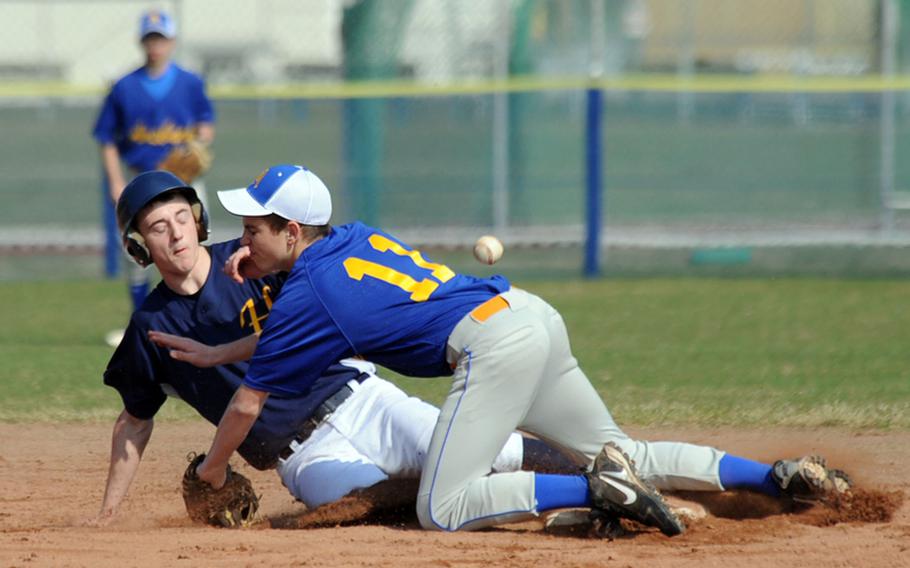 Buy Photo
Heidelberg's Sam Nevinger slides safely back into second after being caught off base, as the ball gets away from Ansbach's Jake Voorhees. Heidelberg swept a doubleheader from visiting Ansbach, Saturday, winning 13-3, 18-5. (Michael Abrams/Stars and Stripes)

Buy Photo
Heidelberg's Sam Nevinger slides safely back into second after being caught off base, as the ball gets away from Ansbach's Jake Voorhees. Heidelberg swept a doubleheader from visiting Ansbach, Saturday, winning 13-3, 18-5. (Michael Abrams/Stars and Stripes) 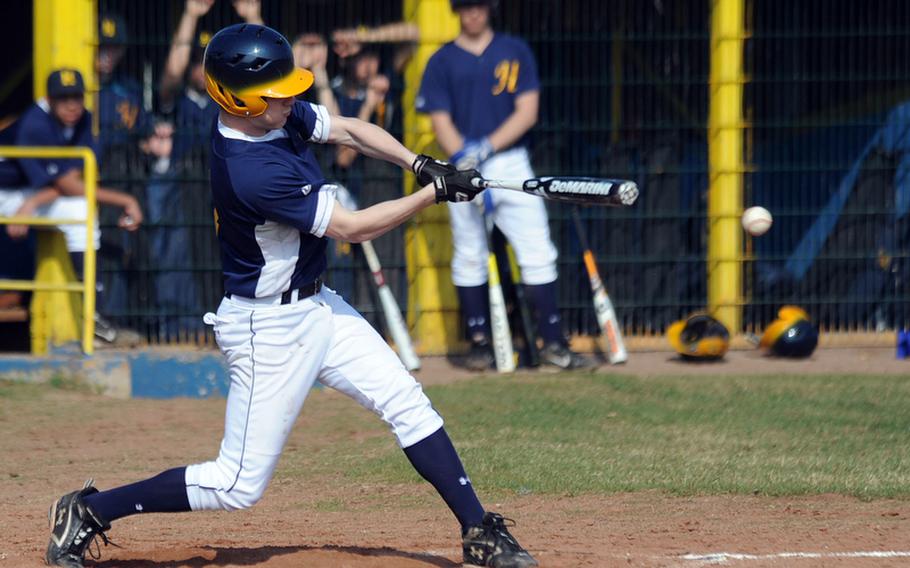 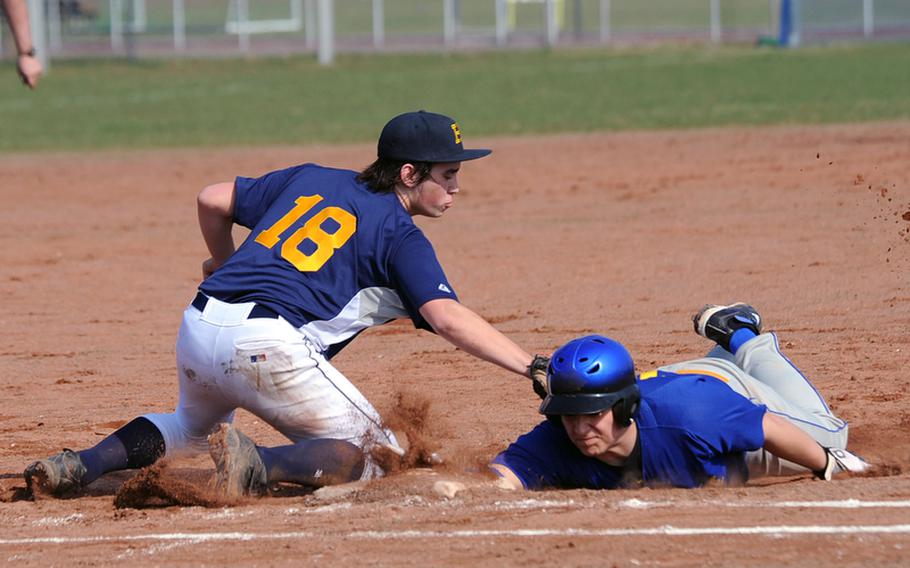 Buy Photo
Ansbach's T.J. Propp beats the tag by Heidelberg's Joseph Patrick after being caught off first base. Heidelberg swept a home doubleheader 13-3 and 18-5. (Michael Abrams/Stars and Stripes) 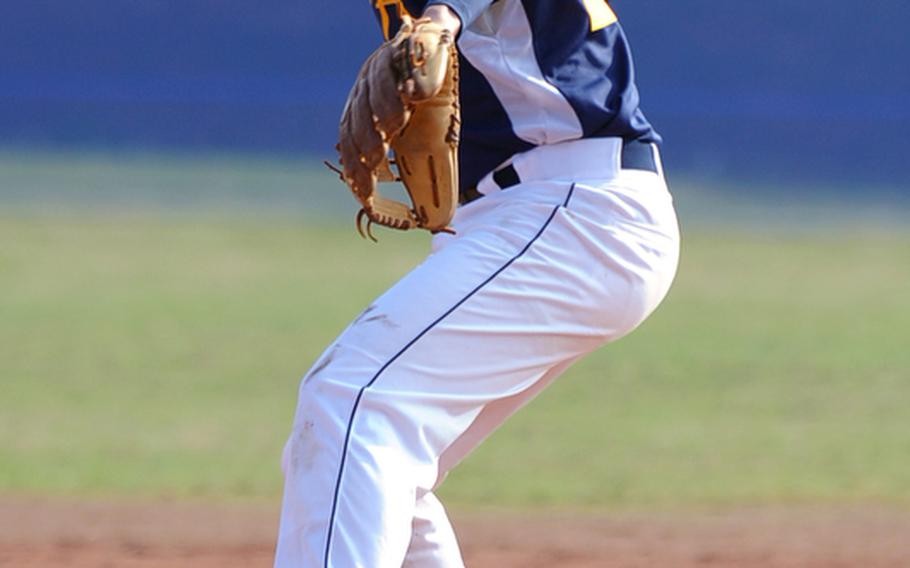 Buy Photo
Alex Weaver was the winning pitcher for Heidelberg in their morning game against Ansbach, Saturday. The Lions swept the home doubleheader, winning the first game 13-3 and 18-5 in the second. (Michael Abrams/Stars and Stripes)

All-Europe senior Jon Grotelueschen pitched a no-hitter Saturday to get the Ramstein Royals started, and three Royals&rsquo; hurlers combined to scatter seven hits in the nightcap to complete a 10-0, 13-6 sweep of the visiting SHAPE Spartans in a Western Region high school baseball doubleheader.

According to Ramstein coach Glenn Porter, Grotelueschen faced just 17 batters, striking out eight and walking just one of them in the opener.

Grotelueschen himself provided all the run support he&rsquo;d need, stroking a two-run homer over the center field fence. He also benefited from two doubles off the bat of third baseman Matt Sharpy and a two-for-three effort with five stolen bases by Justin Pendergrass.

Clay Coon took the loss for SHAPE despite striking out nine.

In Game 2, Ramstein settled the outcome early with an eight-run first inning off SHAPE hurler Nick Westrick, who went the distance.

Pendergrass and Caleb Guerrrido each went three-for-four for Ramstein; SHAPE&rsquo;s Austin Eperjesi matched them at the plate.

Ramstein (4-0) next is to face Lakenheath on Friday; SHAPE (2-2) is idle until a scheduled April 28 home doubleheader against Baumholder.

In other Saturday baseball:

Vilseck 15-22, Schweinfurt 2-0: At Vilseck, freshman John Bohnemann struck out nine in four innings of no-hit baseball in the opener before giving way to reliever Claudio Deaza with the bases loaded in the fifth. Deaza struck out two and allowed Schwinfurt&rsquo;s only hit of the game, a double by Derek Shreve, in his inning of relief.

Bohnemann backed his own cause with three hits and two RBIs, according to Vilseck coach David Nelson, who added in an email that the Falcons&rsquo; Taylor Gowin also drove in two runs.

Shreve took the loss for Schweinfurt, which committed six errors behind him to undo his nine-hit, six strikeout effort.

In the nightcap, ended after three innings by the 15-run courtesy rule, Tanner Fox didn&rsquo;t allow a hit in his route-going performance. He struck out seven and walked just one and was staked to a 10-0 first-inning lead provided by his offense and four of the nine errors the Razorbacks would commit in the game.

Deaza doubled and tripled and knocked in two runs for Vilseck , which also benefited from a Trey Adkins triple. The Falcons, next ticketed to play at Ansbach on Saturday, are 2-0 overall and in the Eastern Region; Schweinfurt, which is to host Wiesbaden on Saturday, is 0-2 overall, 0-2 in the region.

Patch 16-16, Hohenfels 1-6: At Hohenfels, Dylan Measells, who had no-hit the Tigers in his last two appearances against them, allowed two hits and struck out nine in his four innings of work in the opener.

&ldquo;He&rsquo;s a gentleman,&rdquo; Hohenfels coach Darren Mesch said by telephone Saturday in downplaying his team&rsquo;s breakthrough against the 2011 Stars and Stripes player of the year. &ldquo;He wasn&rsquo;t using his curve ball.&rdquo;

Measells went three-for-four and knocked in a run in supporting his own cause. All-Europe catcher Jack Smith doubled, tripled and drove in three runs in four at-bats in the opener, which also saw All-European Ryan Tannenbaum knock in two runs in collecting two of Patch&rsquo;s 19 hits.

Kaleb Petersen drove in the run for Hohenfels.

In Game 2, C.J. Kellogg picked up the victory behind a homer and double and three RBIs off the bat of Tannenbaum and two RBIs from Measells.

Rene Bourgeois took the loss for Hohenfels (0-2, 0-2), which is to travel to Bamberg on Saturday.

Patch (2-0, 2-0) is scheduled to travel to Heidelberg on Saturday for an Eastern Region showdown.

Heidelberg 13-18, Ansbach 3-5: At Heidelberg, the Lions broke up a pitching duel between their starter, All-European Alex Weaver, and Ansbach&rsquo;s Jacob Vorhees with an 11-run fourth that erased a 3-2 Ansbach lead, according to Heidelberg coach Justin Bates.

The Lions rode another big inning to the Game 2 triumph: a nine-run first.

AFNORTH 13-7, Alconbury 0-5: At Alconbury, Zach Woodbury and Westin McKinney combined to shut out an Alconbury squad the Lions buried with a 10-run first inning.

Saverio Yong and McKinney each went two-for-two in the romp.

Game 2 was a different story, as the Lions (2-0 overall and in the Western Region) needed Nathaniel Nieves&rsquo; two-run, last-inning triple to nail down the victory. McKinney, who stroked two doubles in three at-bats in this one, came on to seal the victory by striking out all six batters he faced in the game&rsquo;s final two innings.

Brad Hocevar was two-for-two for Alconbury (0-2, 0-2) which is scheduled for doubleheaders at Baumholder on Friday and Bitburg on Saturday. AFNORTH is scheduled to play at Bitburg on Friday.

Kaiserslautern 8-13, Baumholder 2-5: At Baumholder, Cameron Collums got the win in the opener, striking out six and walking just one. Chris Jastrab won the nightcap as K-town, next scheduled for a Friday doubleheader against visiting Lakenheath, improved to 2-2 overall and in the Western Region.

Baumholder fell to 0-2, 0-2 going into its next contests, Friday against visiting Alconbury.