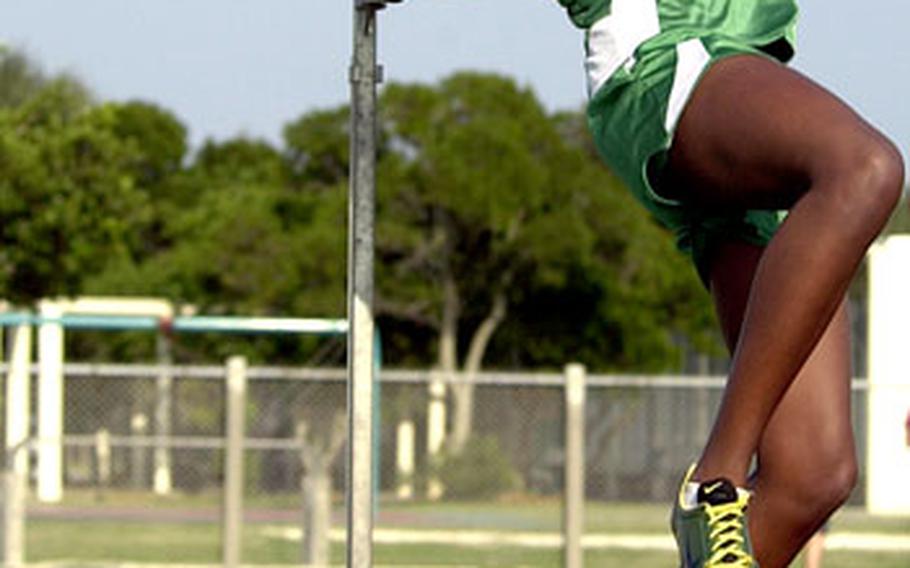 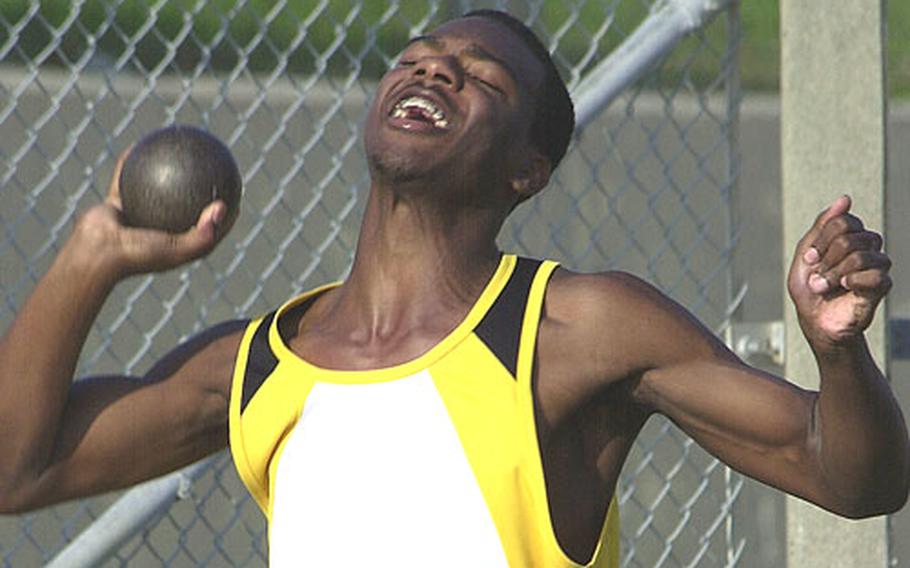 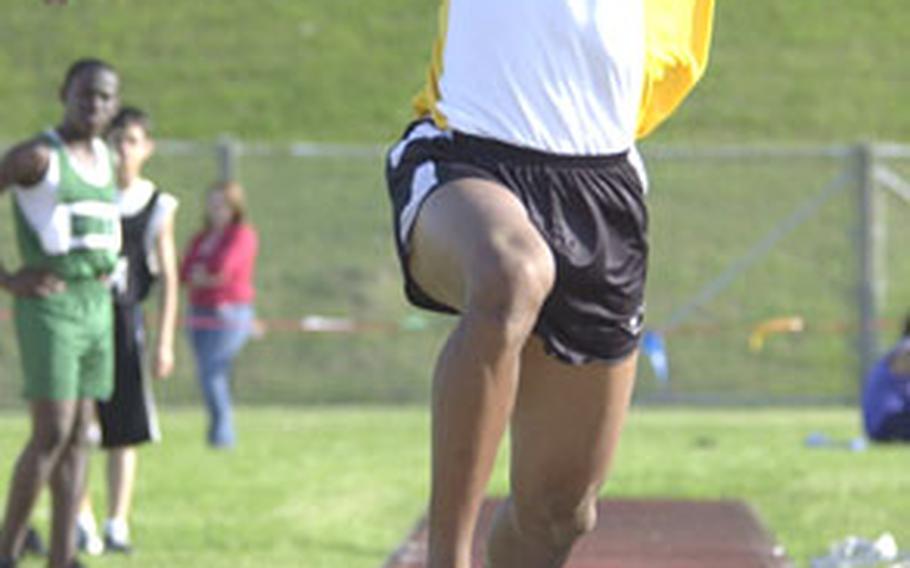 Tennyson&#8217;s record-tying effort was one of several stellar performances in the Petty, which featured 13 teams &#8212; the highest total in the meet&#8217;s history &#8212; from Taiwan, the Philippines, Guam, Okinawa and Japan.

All told, five records fell and one was tied &#8212; Tennyson equaled Janska&#8217;s mark &#8212; on the first day of competition in which seven field events plus the 3,200-meter final and qualifying in middle-distance and short sprints were held. (See complete results below.)

Perhaps the most surprising record came in the boys 3,200. Zach Griffin of the American School In Japan and Tim Nabonne of Kadena went at it, hammer and tongs. Nabonne led early, only to have Griffin come back and make a race of it on the seventh lap.

But on the ninth lap, Nabonne chugged toward the finish line and pulled up as the bell sounded. However, the bell indicates the start of the final lap. Griffin passed him and Nabonne briefly threw up his hands before resuming the race. But by then, it was too late.

Griffin crossed the line in 10 minutes, 8 seconds, obliterating the meet record of 10:20 set in 2004. Despite stopping and losing up to 10 seconds, Nabonne still managed a 10:18, two seconds better than the old meet record and 14 better than his personal best.

But it was small consolation.

In the girls high jump, Tennyson and Janska outdistanced the rest of the field, then went head-to-head, matching each other at 5 feet. Each missed on her first attempt at 5-1, then Tennyson made it on her second try, while Janska barely missed on the next two. Trying to tie her personal best and island record, Tennyson then failed to clear 5-4 on three attempts.

Tennyson, who&#8217;ll remain at Kubasaki until she graduates next spring, says she hopes to reach 5-8 before the end of this season and has set 5-10 as a goal for next year. And, she said, she plans to beat Janska again in May&#8217;s Kanto Plain Association of Secondary Schools meet in Tokyo, where Kubasaki will compete as a non-scoring guest.

Also setting a meet record was Manuel Duran of Kadena, who shook off a slight concussion suffered in Monday&#8217;s practice to long-jump 20 feet, 21/4 inches &#8212; 1 inch better than Chris Chism of Zion Christian Academy and Brian Davis of Kubasaki.

One familiar face in the Petty meet, Ashley Muller of Taiwan&#8217;s Morrison Christian Academy Mustangs, beat her own discus record at 99 feet, 5 inches, breaking her 2005 mark of 95 feet.

While Newton came up short in the shot put, finishing third in both events, he did capture the high jump at 6-2, edging Kubasaki&#8217;s Steven Thompson by one inch.

Newton felt the outsiders&#8217; presence made things more difficult for him but also fired him up more.

Though not setting a record, Beth Nielsen of Kubasaki repeated as the girls, 3,200-meter champion, shaving 30 seconds off her time last year in crossing the finish line in 12:20. Her twin sister, Lisa, checked in third in 12:33.

The Petty Meet is named for Okinawa track and field&#8217;s founding father and former Kubasaki athletic director Mike Petty, who died of cancer in 1992. The meet was to conclude Saturday with the girls&#8217; long jump and sprint, hurdle and long-distance running events for boys and girls.