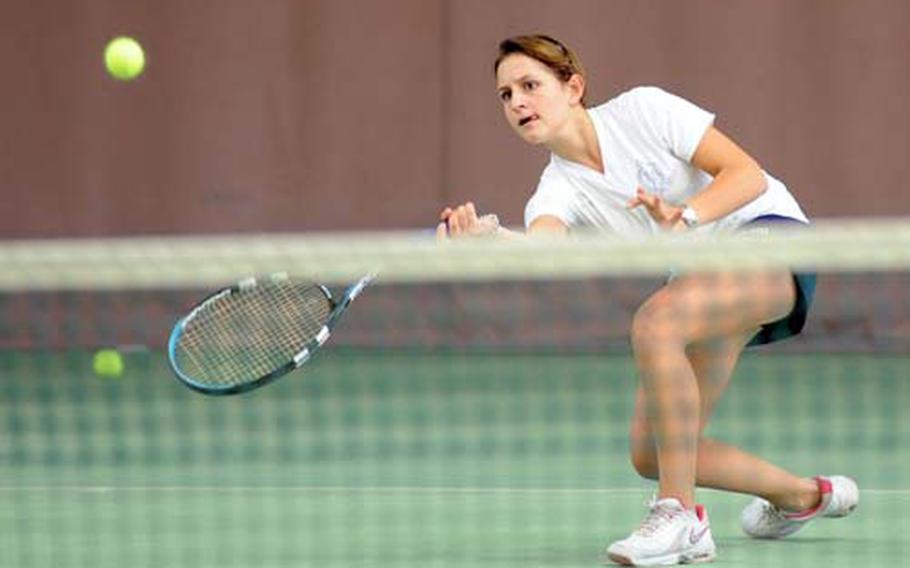 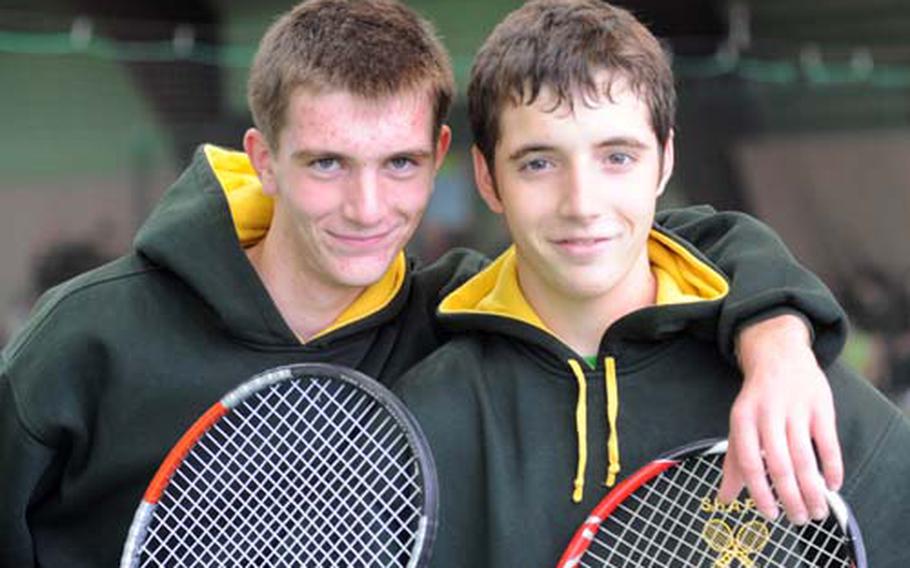 WIESBADEN-NORDENTSADT, Germany &#8212; Last year&#8217;s girls singles champ proved she wasn&#8217;t a one-year wonder, while SHAPE pulled off a sweep of the boys titles in the DODDS-Europe tennis championships Saturday.

The boys singles championship was a wide-open shootout between the forehand power of SHAPE&#8217;s Nikolay Gospodinov and the potent spin attack of Heidelberg&#8217;s James Chase. In the longest match of the day, Gospodinov came out on top 7-6 (7-3), 3-6, 6-2.

Both doubles championships were upsets. SHAPE&#8217;s tandem of Juan De La Torre and Andrei Mavris beat top-seeded Shota Shindo and Brady Covington of the International School of Brussels, 6-4, 1-6, 6-4. And in the girls event, the No. 5 team of Meghan Augsburger and Olivia Rockwell from Ramstein beat second-seeded Taylor BonenClark and Stephanie Seitz of AFNORTH, 5-7, 6-0, 6-4.

In the boys singles, Gospodinov jumped out to a 3-0 first-set lead, only to see Chase break serve and battle back to tie. They split the next six games until Gospodinov put Chase away in a tiebreaker.

In the second set, Chase battled back using an equally effective backhand and forehand spin and forced the decisive third set. In that set, each player held serve for the first five games until Gospodinov managed to break for a 4-2 lead. The visibly shaken Chase slammed his racket into the net after he overhit the ball to fall behind.

As Gospodinov held serve to take a 5-2 lead, Chase slammed his racket again, this time onto the court. Action was stopped as the crowd wondered whether Chase would be disqualified. Organizers ultimately penalized him one point.

"I didn&#8217;t want to win that way, so I was hoping he could keep playing," Gospodinov said after finishing the match.

"My forehand sucked," Chase said. "I was frustrated with my inconsistency."

The girls match didn&#8217;t have the drama of three sets, but there were plenty of long volleys featuring finesse shots on both sides of the net.

After taking the first set 6-4, Bolla appeared to have things wrapped up when she jumped to a 4-0 lead in the second set. But Jones battled back, tying it up 4-4.

But Bolla broke serve in the next game and then held serve to complete the match.

Bolla said her forehand was the key to her victory.

"I was afraid she would come back and win the second set," Bolla said. "I knew I could win, though, if I had patience and played like I did during the first set.

"They were communicating more with each other this week," he said. "They had a plan."

Ochinang wasn&#8217;t surprised the two duos staged a rematch in Saturday&#8217;s finale. "Before they played last week," he said, "I told the ISB coach that this was going to be the European championship match, and it was."

After losing the first set in girls doubles, the freshman duo of Augsburger and Rockwell, who had earlier eliminated the girls doubles top seed, knew they had their work cut out.

"We got over our mental game, because we were really nervous," the emotional Augsburger said after they stormed through the second set, then won the third.

Rockwell credited their victory to communication.

"We work really well together," he said.

Team titles, based on combined boys and girls results, went to Ramstein in Division I, American Overseas School of Rome in D-II and Brussels in D-III.