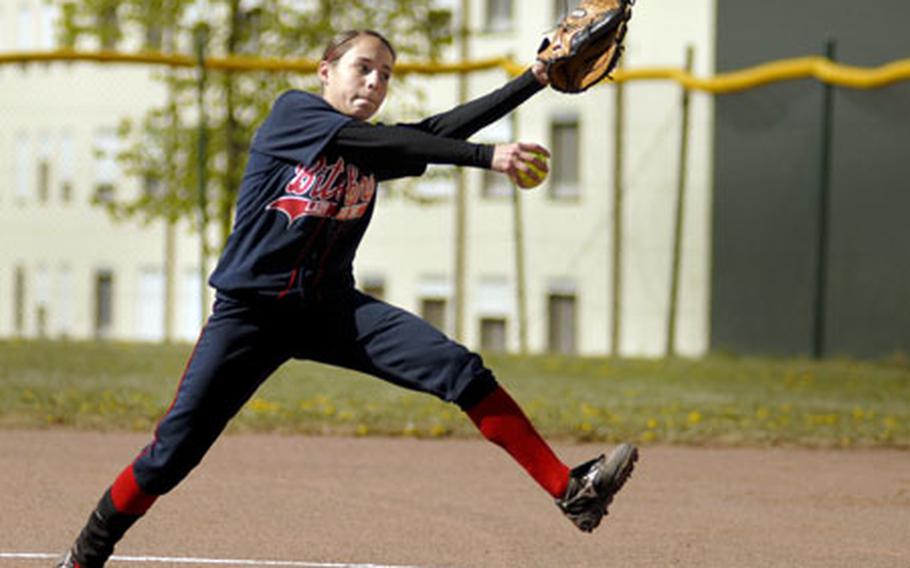 Sandra Davidson, a Bitburg sophomore, hurls a strike in the first game of a doubleheader sweep of against Mannhiem on Saturday at Bitburg. (Ben Bloker / S&S)

Sandra Davidson, a Bitburg sophomore, hurls a strike in the first game of a doubleheader sweep of against Mannhiem on Saturday at Bitburg. (Ben Bloker / S&S) 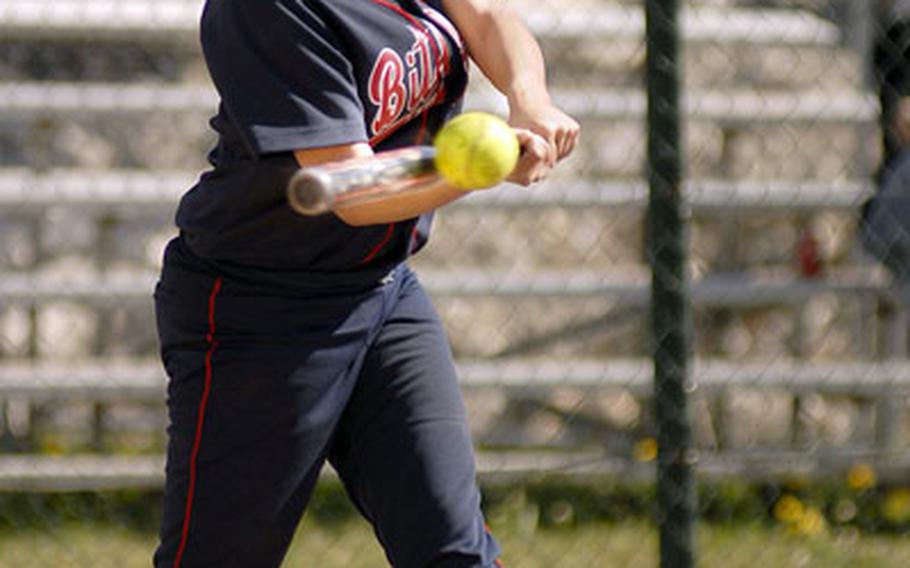 Ashley Chauvin, a Bitburg junior, cracks a single in the third inning of the first game of a doubleheader against Mannhiem Saturday at Bitburg. Chauvin went on to score a run in Bitburg&#39;s 15-0 win. Bitburg won the nightcap 22-4 to complete the sweep. (Ben Bloker / S&S)

Rebecca Groff picked up the victory in all four games this weekend as the undefeated Lakenheath Lancers improved to 6-0 and moved into sole possession of first place in the Division I softball standings.

Groff wielded a hot bat, too. She had two hits in both Saturday games and in Friday&#39;s shutout, and stroked three hits in Friday&#8217;s victory over K-town. Jessica Serd also banged out three hits in that game.

Ramstein 17-15, Wiesbaden 2-0: Saturday at Wiesbaden, the Lady Royals rebounded as Kayla Haven and Hill each scored four times in the opener and Jones tossed a one-hitter in the nightcap.

Patch 14-13, Baumholder 2-11: Saturday at Baumholder, Lalau faced only nine batters in the first three innings of the first game as the D-I Lady Panthers opened a 10-0 lead over their D-II hosts. Lalau had two doubles and drove in six runs. Lalau stroked a three-run homer in the nightcap in a five-RBI outing, and Lauren Nation added a grand slam and drove in six runs. Anne Wasson went 4-for-4 as the Lady Panthers feasted on Bamholder pitching. According to Baumholder coach Spencer Bean, Angel Roman made a key catch for Patch in the nightcap when she snared a hard shot to left with two outs and a Lady Buc on third to preserve a 10-9 lead. Sharena Cabrera went 4-for-5 in the second game for Baumholder. Brianna Hudak&#8217;s last-inning RBI single off Lalau was as close as Baumholder got.

Bitburg 15-22, Mannheim 0-4: Saturday at Bitburg, Sandra Davidson and Emily Long picked up the victories. Davidson struck out eight and allowed just two hits in her four-inning shutout; Long stroked an inside-the-park home run in her victory, also cut to four innings by the 10-run rule. Erica Green also had an inside-the-park homer in the nightcap.

London Central 28-31, Alconbury 15-7: At London Central, Alexis White pitched both victories. She went 3-for-3 with a home run and scored five times in the nightcap, according to London Central coach Duke Eidt.