Girls tourneys have favorites, but plenty of room for upsets 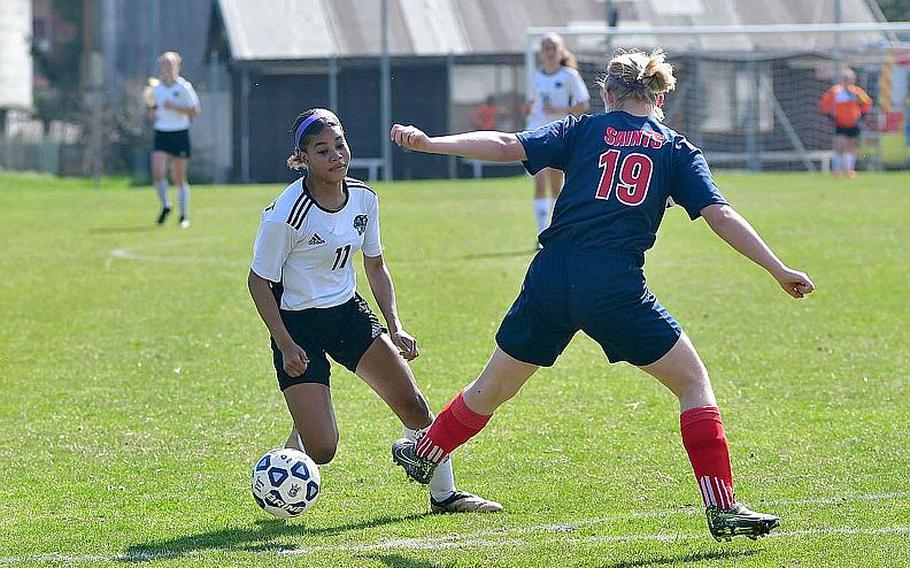 An interesting set of three DODEA-Europe girls soccer tournaments is set to play out Monday through Thursday in the Kaiserslautern Military Community; one featuring a proud defending champion pursued by a relentless rival, the other two with no defending champions at all.

Division I The Wiesbaden Warriors and Stuttgart Panthers played to a 2-2 tie on May 11, the last day of the regular season, offering a preview of what figures to be a very competitive large-school bracket.

Stuttgart routed every opponent it saw this spring until its finale against Wiesbaden. The Panthers downed longtime rival Ramstein 6-1 to open the season March 23, then blanked Kaiserslautern 4-0 on May 4. But those three games represent the entirety of Stuttgart’s Division I body of work this spring.

Wiesbaden, in contrast, played over twice as many Division I games as Stuttgart, and won most of them by large margins. A scoreless tie with Ramstein on April 20 and the season-ending tie with Stuttgart represent the only blemishes on the Warriors’ dominant regular season.

Top-seeded Stuttgart headlines a four-team tournament pool it should have no trouble surviving. Second-seeded SHAPE, undefeated until a narrow 1-0 loss to Ramstein on May 3, represents the field’s biggest threat to the Panthers, while fifth-seeded Vicenza and eighth-seeded Kaiserslautern are eying big upsets.

Second-seeded Wiesbaden landed in a more perilous pool. The Warriors will have to hold off at least one of sixth-seeded Ramstein, which played them to a stalemate, and third-seeded Naples, which fared well in a 2-0 April loss to Wiesbaden, to advance to the elimination round from a five-team pool that also includes No. 7 Lakenheath and No. 9 Vilseck.

A Stuttgart-Wiesbaden final, should it happen, would be a rematch of one of the more thrilling European championship matches in recent memory. Wiesbaden beat Stuttgart in a penalty-kick shootout to claim the 2017 Division I crown.

Top seed Black Forest Academy is the early favorite. The Falcons are the most recent European champion in the field, having beaten Spangdahlem, then known as Bitburg, for the 2016 crown. But BFA played just two Division II games this year, both lopsided wins over struggling AFNORTH, so much remains to be proven for the Falcons.

The No. 2 seed Rota Admirals sit atop the other pool with plenty to recommend them for title contention. Rota, the 2018 European runner-up, swept through fellow southern Division II schools American Overseas School of Rome, Marymount, Aviano and Bahrain this spring, handling its region with the same firm hand with which BFA subdued the north.

While anything can happen in the tournament, that’s a lot of foreshadowing for a potential BFA-Rota showdown in the final.

Division III The numbers caught up to DODEA-Europe’s smallest division this season.

The reigning champion Alconbury Dragons found themselves without enough players to field a viable roster and were forced to field a co-ed squad playing in the boys division, a path blazed in recent seasons by the Ansbach Cougars. The absence of those two small-school stalwarts leaves the 2019 Division III girls tournament with just five teams, and no defending champion.

Appropriately enough, a new arrival to the disrupted bracket seems the most qualified to step into the vacancy at the top. The 2018 Division II champion Spangdahlem Sentinels, realigned to Division III early this school year, enjoyed a strong regular season featuring sizeable wins over new divisional rivals Baumholder and Brussels.

Sigonella, which lost to Alconbury in last year’s final, and Hohenfels, last year’s third-place finisher, rank as the Sentinels’ top challengers in the round-robin tournament.