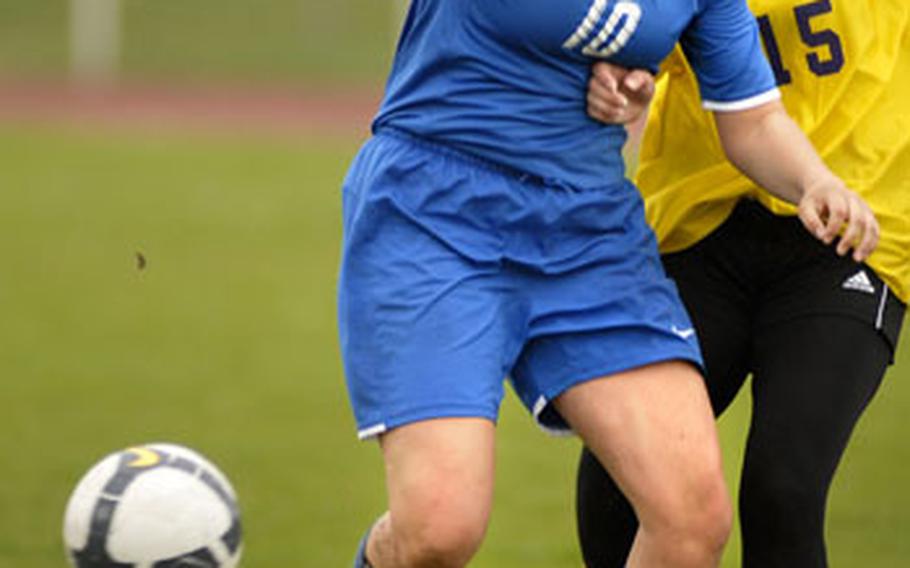 As it turns out, the best way to turn around an 0-3 start by the defending European girls Division II soccer champions is not to invite Division I power Ramstein over to kick the ball around.

"Ramstein dominated from start to finish," Mannheim coach John Crockett said by telephone Saturday after five Lady Royals scored in a 5-0 victory that sent Mannheim, unbeaten in 2008, to 0-4 in 2009.

Laura Welch scored one goal and assisted on two others to lead the offensive show. Defensively, Ramstein (3-0 overall, 2-0 Region II) allowed no shots on goal. The Lady Royals are unscored-upon this season.

Baumholder 5, Kaiserslautern 4: On Saturday in the rain and mud at Baumholder, All-Europe Katrina Alsup scored two goals and assisted on two others as the D-III power Lady Bucs outgunned their D-I visitors.

Baumholder coach Sam Alsup praised the defensive play of Alexandra Bower, who, he wrote in an e-mail, "saved many shots from reaching the goalie/goal."

Naples 3, Aviano 0: On Saturday at Aviano, Italy, Naples assumed the driver&#8217;s seat in the American Schools in Italy League race behind two goals off the foot Dana Coburn.

Naples, which defeated Vicenza 5-1 on Friday behind freshman Haley Witz&#8217;s three goals, improved to 3-0 overall and in Region IV.

Aviano, which defeated visiting Sigonella 3-0 on Friday as Alyssa Lane scored twice, is 2-1-1.

Heidelberg 3, Hohenfels 1: On Saturday at Hohenfels, Rebecca Luna, Asya Tucker and All-European Maggie Cutler provided the scoring, which when combined with 13 saves by Heidelberg keeper Melanie Stordahl handed the Lady Lions (2-1) their second Region III victory in as many tries.

Loisann DeLass, off a feed from Darien Eldred, scored a second-half goal for Hohenfels (1-2, 0-2).

Hanna Fellenger scored on a penalty kick for Bamberg and assisted on her team&#8217;s other goal, tallied by Isha Sumah.