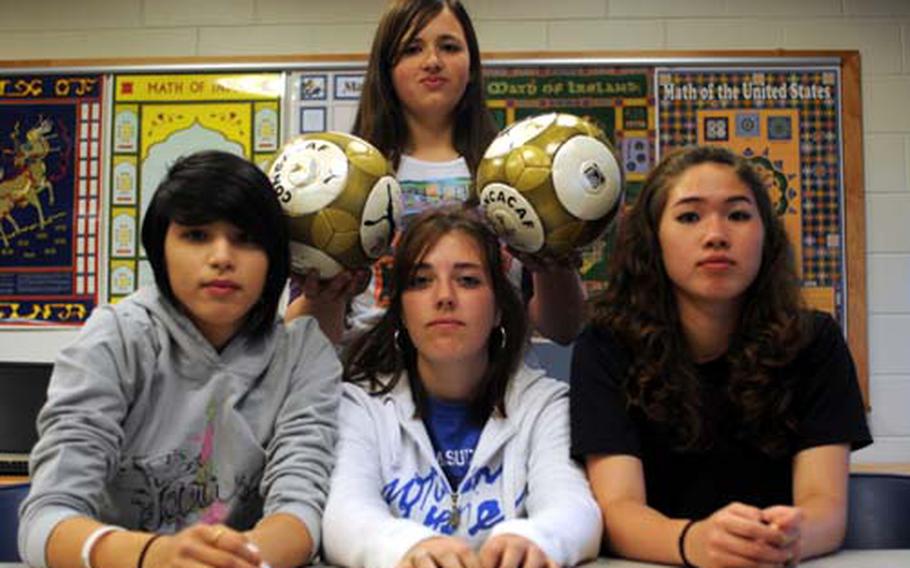 OSAN AIR BASE, South Korea &#8212; The cheering had barely quieted after Osan American&#8217;s 4-0 and 4-1 championship victories in last May&#8217;s Far East Girls Class A Soccer Tournament that the grim reality set in: It would be the Cougars&#8217; last time playing with high-scoring Bria and Jasmine Pressley.

Well, what the Cougars (23-5-3 last year) did was take the opposite tack: Lock down on defense, with sweeper Alina Hauter leading the way, and import a stellar goalkeeper from another Pacific champion team, Deanne Polaski of Zama American.

Add a dash of Frisby (13 goals), sophomore Stephanie McDole (10) and playmaking junior Courtney Ouellette (10 assists), and the Cougars &#8212; at 10-1-3 and second in the Korean-American Interscholastic Activities Conference &#8212; are doing even better than at this time last season.

So, what has changed?

Two opposing coaches, Joon Myong of KAIAC regular-season champion Seoul Foreign and Daegu American&#8217;s Ed Thompson, see a team with strong players on all parts of the field, working the ball through the middle and using the outside instead of kicking and chasing like last season.

Start in the back. Perhaps the key figure would be 5 &#8212; the number of goals allowed by Osan this season. Of those, three were regulation goals by Taejon Christian International; the others were penalty kicks.

Teammates and coaches credit the arrival of Polaski, the hero of last year&#8217;s Class AA Tournament final in which she stopped three Kubasaki kicks in the penalty-kick shootout.

That was an important part of transitioning from star system to more of a team concept, players said.

The midfielders, coach Sung Plourde said, have &#8220;stepped up and created more opportunities to the forwards up front, whereas last year, we simply gave it to the Pressleys and they finished.&#8221;

Ouellette gives much of the credit for the Cougars&#8217; success to Plourde, who has coached soccer at Osan for the last decade.

Perhaps the best thing to happen to the Cougars, players said, was their 2-1 loss last Friday at Taejon Christian International, their lone loss of the season.

They may get their chance at this weekend&#8217;s KAIAC tournament at Seoul Foreign. Then Osan vies for its Pacific-record sixth Class A Tournament title at Daegu, which would be two straight for Frisby, McDole and Ouellette, who recalls last year&#8217;s title run as if it were yesterday.

She will return next year, as will Polaski and McDole; and for all its veterans, the defense sports nary a senior.