Kaiserslautern&#39;s Liana Knight controls the ball as Ramstein&#39;s Megan Arceneaux closes in during the second half Saturday at Ramstein. Knight scored two of Kaiserslautern’s three goals in a 3-3 tie. (Ben Bloker / S&S)

Kaiserslautern&#39;s Liana Knight controls the ball as Ramstein&#39;s Megan Arceneaux closes in during the second half Saturday at Ramstein. Knight scored two of Kaiserslautern’s three goals in a 3-3 tie. (Ben Bloker / S&S) 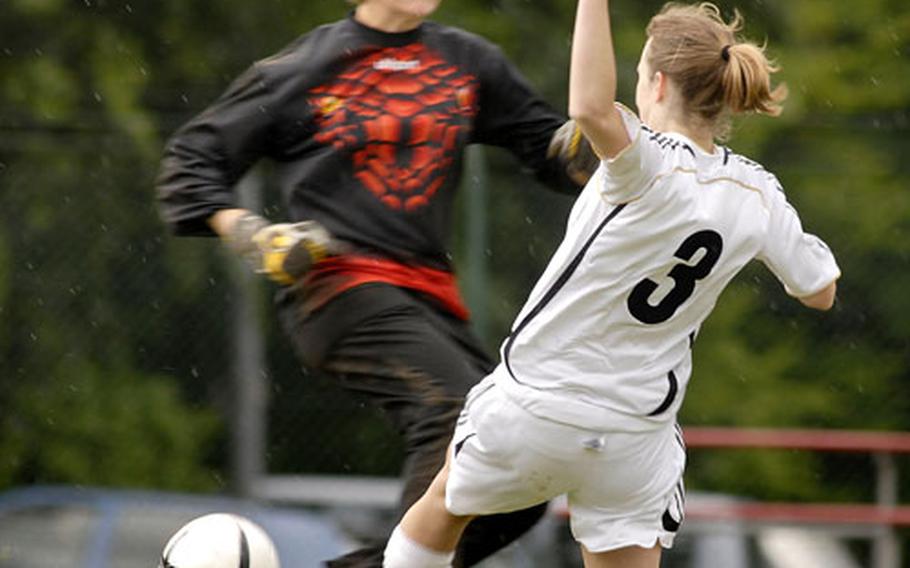 Ramstein&#39;s Bridgette Dean attempts to score on Kaiserslautern goalie Pia Coffman during the first half of their 3-3 at Ramstein Saturday. (Ben Bloker / S&S) 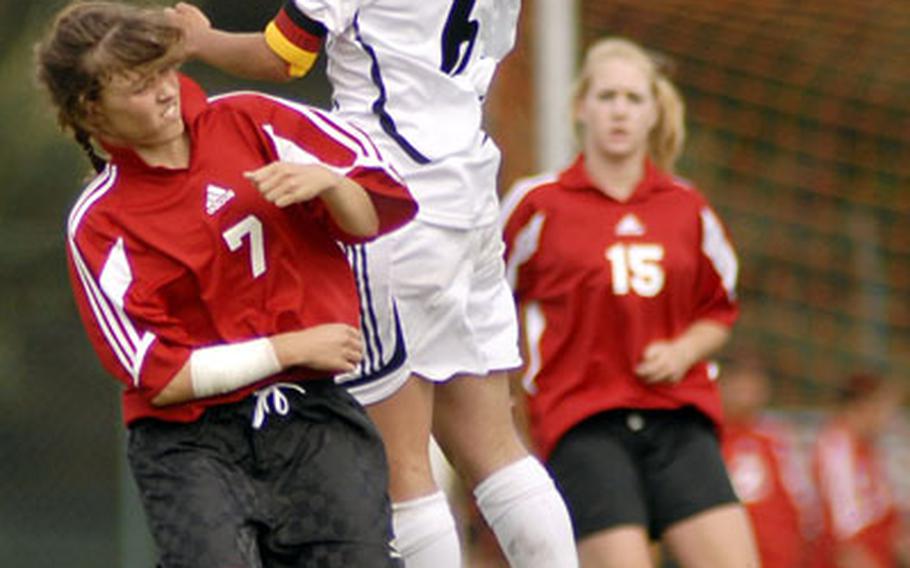 Sometimes a tie is as good as a victory.

Joy Hrushka banged home a penalty kick with four minutes to play, and All-Europe junior Liana Knight broke away for an unassisted goal in the game&#8217;s final minute to allow Kaiserslautern to salvage a 3-3 tie against defending Division I champ Ramstein.

But it wasn&#8217;t enough to stop the Lady Royals from winning another conference crown. Ramstein finished the regular season 5-0-2 overall, 4-0-2 in D-I to beat out Kaiserslautern (3-0-3 in the conference and overall), which needed a victory to claim the title.

Ramstein appeared to have the game in hand behind goals from Stephanie Silvey, All-European Lauren Williams and Jamie Cachuela, but an injury to a key defender opened the door for the Red Raiders, Buitrago reported.

&#8220;Our defense became disorganized after an injury to Rebecca Breedlove, which took her out of the game in minute 74,&#8221; he wrote.

The confusion resulted in the foul that led to Hrushka&#8217;s penalty kick and Knight&#8217;s unassisted goal, her second of the game. She had given the Red Raiders a 1-0 lead three minutes after intermission on a direct free kick from 18 yards out.

Buitrago said the tie should motivate his team at the European tournament, scheduled for Wednesday through Saturday.

In other games of note in Saturday&#8217;s regular-season finales:

Naples 5, AOSR 0: At Naples, Italy, a goal and two assists by Courtnee Wilson fueled a title-clinching victory over the American Overseas School of Rome.

The triumph allowed the Wildcats to catch idle Aviano and Marymount International School of Rome atop the American Schools in Italy League final standings.

All three teams finished 4-1-1. But Naples, which tied Aviano 3-3 on April 28 and edged Marymount 4-3 on the road the previous week, claimed the three-way goals-differential tiebreaker.

Dominique Aljabi added a goal and an assist, and Kelsey Anderson two assists for Naples, which will join archrival Aviano in the European Division II tournament this week.

Hanau 3, Hohenfels 1: At Hohenfels, All-Europe sophomore Fei Oloi continued her scoring onslaught with three goals to help clinch the III-South crown for the Panthers. Oloi, who played in goal most of her freshman season, has scored eight times in the three games Hanau has played since spring break.

The victory probably also clinched the top seed in the European D-III tourney for Hanau (6-0-1 overall, 6-0-0 in the league).

ISB 1, Patch 0: At Stuttgart, Josine Blok converted a feed from Lydia Gray with two minutes left to lift the International School of Brussels into the No. 3 seed at this week&#8217;s European D-I tournament.

SHAPE 2, Baumholder 0: At Baumholder, Division II-North champion SHAPE completed an unbeaten regular season behind a goal in each half by Evridiki Nalmpanti.