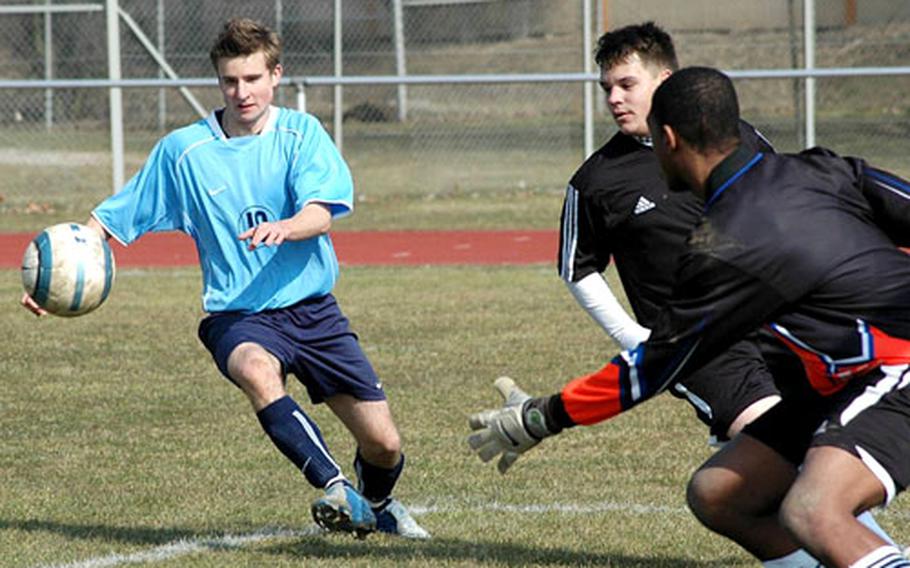 Sean Kerber of Heidelberg looks to control the ball during a recent home game. Kerber’s coach, Perry Puppolo, says he is not only fast, but also very physical. (Gene Knudsen / DODDS-Europe)

SCHWETZINGEN, Germany &#8212; Heidelberg junior striker Sean Kerber has honed his skills the past 11 years by absorbing German-style soccer. But he believes his sports future lies in the United States.

It&#8217;s a goal that&#8217;s well within Kerber&#8217;s reach. He led the Lions with nine goals in their first two games before being shut out Saturday at International School of Brussels.

That was not typical of Kerber, who, according to Heidelberg acting head coach Perry Puppolo, is far from finished in soccer.

He said he has heard from Towson State University, the Maryland college to which his friend and Olympic Development Program teammate Tommy Appel-Schumacher of Kaiserslautern&#8217;s top youth squad already has committed, and the University of North Carolina.

Physicality isn&#8217;t the only difference between U.S. and German soccer.

&#8220;The Germans tend to talk more to each other,&#8221; said Kerber, who currently plays for a team in nearby Kirchheim, &#8220;and they&#8217;re a little more aggressive. The ball moves quicker because they&#8217;re always communicating. They work hard on knowing where everybody is and making one-touch passes.&#8221;

The result so far has been to make a European player out of Kerber.

Kerber said his experience with German teams made him in the player that he is.