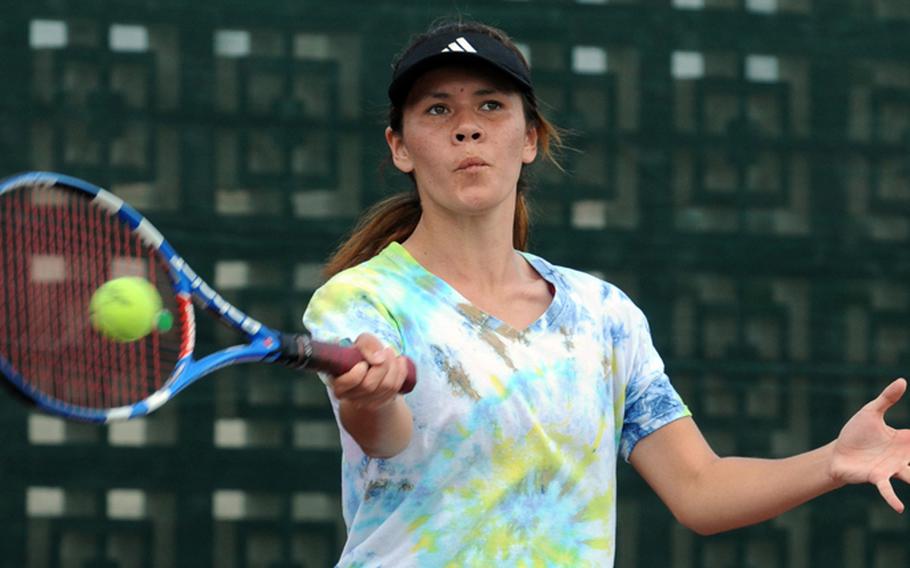 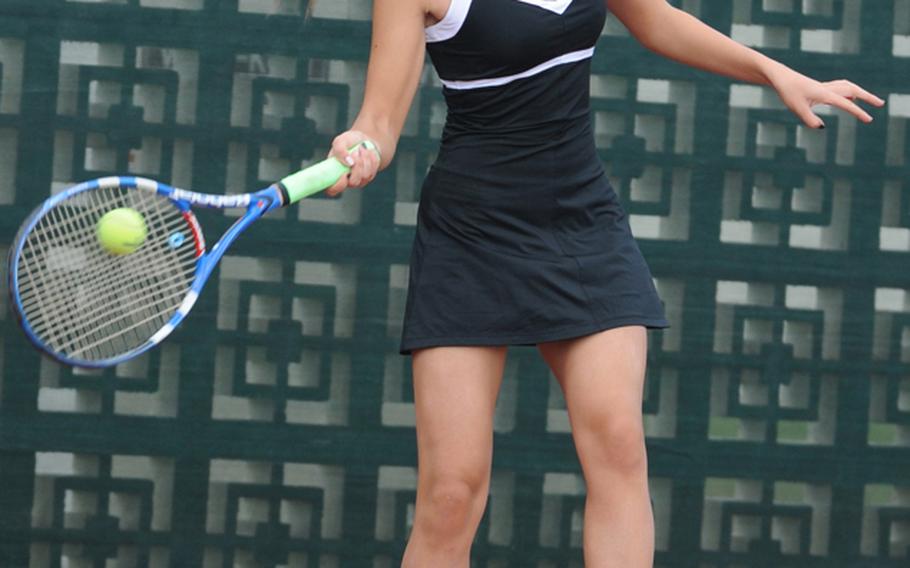 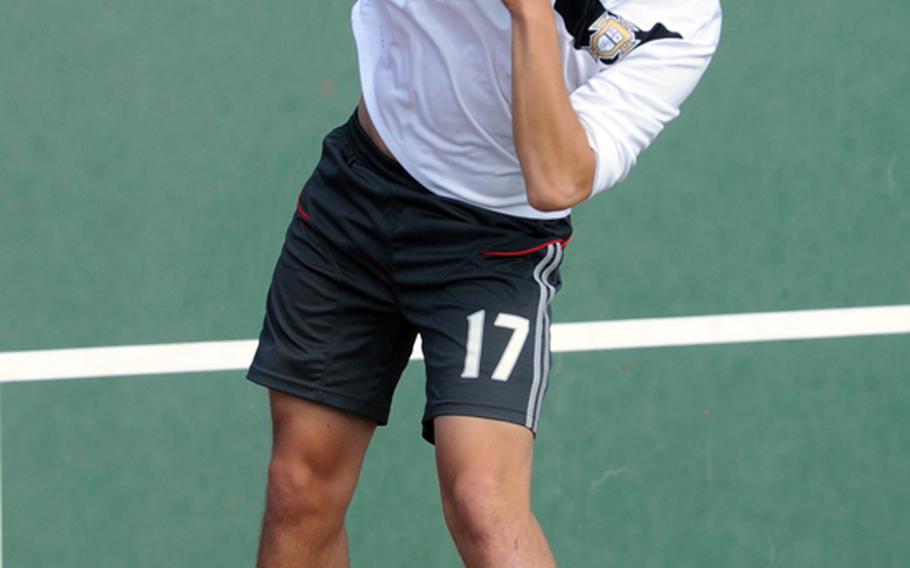 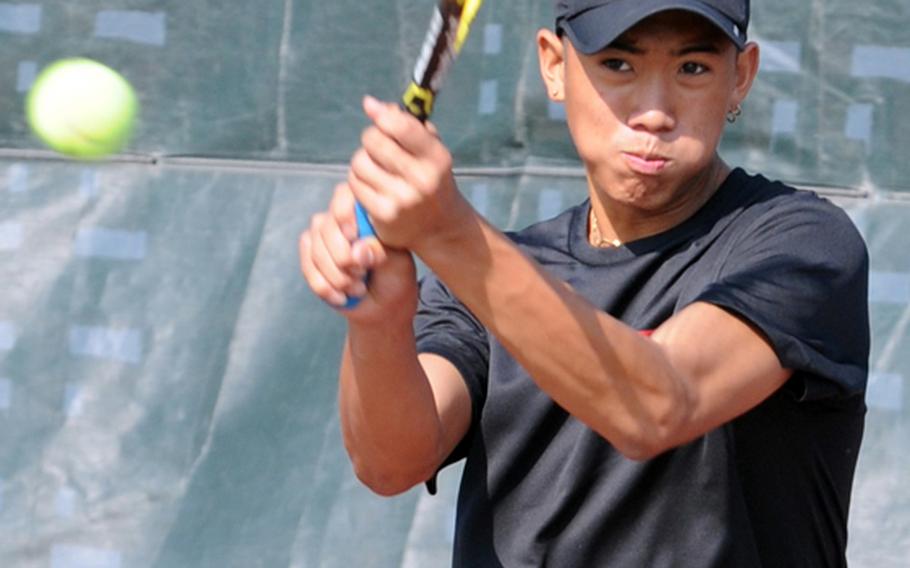 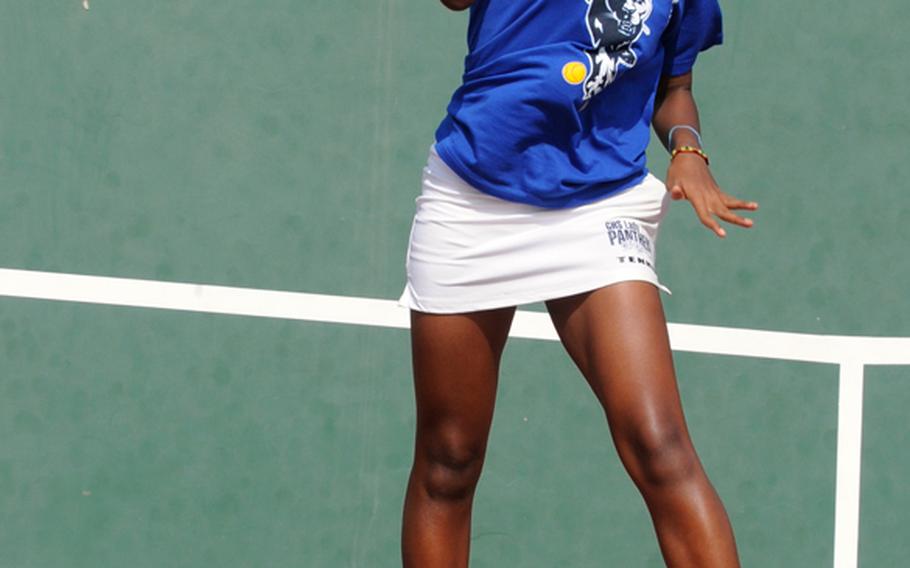 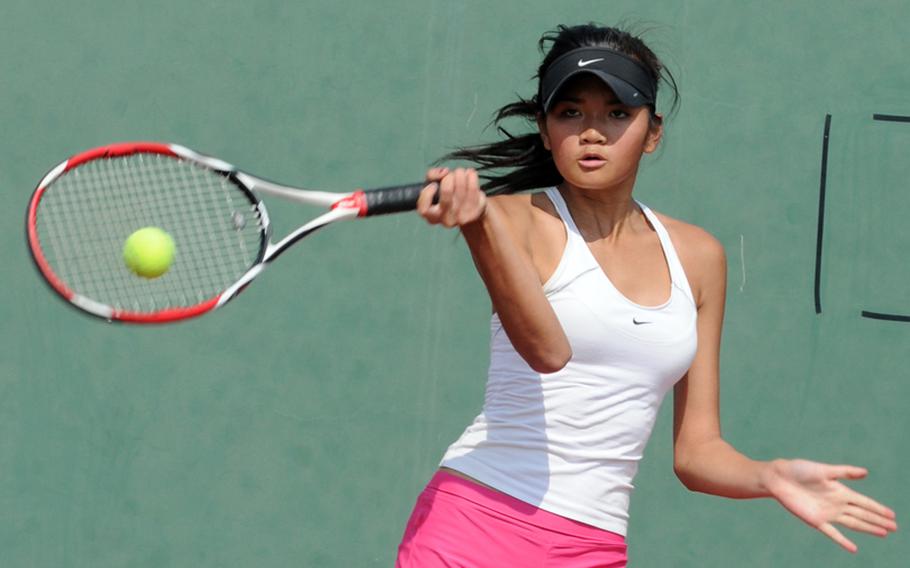 KADENA AIR BASE, Okinawa &ndash; Chloe Gadsden could be forgiven if she played Wednesday&rsquo;s Far East High School Tennis Tournament semifinal with one eye on the court next to her &ndash; and her eventual finals opponent, Erika Youngdahl of Kadena.

&ldquo;It doesn&rsquo;t get any easier, and definitely gets tougher&rdquo; to become a two-time finalist, Gadsden said. &ldquo;You don&rsquo;t know who is going to improve, and everybody improves.&rdquo;

She would make it three straight years that a Gadsden (Amber won in 2009) has won the singles title if she gets past Youngdahl, who reached her first final by downing her old Yokota classmate and friend Emily Beemsterboer 6-4, 6-1.

&ldquo;She looks more consistent and looks like she has more pace on her balls, hits the ball harder&rdquo; than last year, Gadsden said of Youndahl.Youngdahl, twice Okinawa&rsquo;s district champion and a Kanto Plain tournament champion as a freshman, found Far East semifinals to be a house of horrors the past three years, but the past&rsquo;s pain became Wednesday&rsquo;s joy.

Youngdahl transferred to Kadena as a sophomore two years ago, but remains close to Beemsterboer and most of the Yokota team.

&ldquo;This is her year, and it&rsquo;s good,&rdquo; said Youndahl&rsquo;s former coach at Yokota, Tommy Palmer. Youngdahl and Beemsterboer &ldquo;love each other off the court, but on the court it&rsquo;s all business. Emily played her tough, but Erika stayed with it, didn&rsquo;t lose her composure.&rdquo;

&ldquo;In the first set, he had me running for every ball, and in the second set, his forehand was much more accurate,&rdquo; Cadavos said. &ldquo;He just played better than me.&rdquo;

Clark, in his first year of playing singles, said he&rsquo;d been overcome by heat exhaustion after the third game of the second set. &ldquo;All the energy went out of me,&rdquo; Clark said.

The sixth-seeded Cobras got 17 spike kills and six aces from returning All-Far East hitter Katie Rock against the No. 3-seeded Guardians.Between that and pre-tournament favorite and host Daegu High&rsquo;s struggle to beat No. 5 Osan American in four sets, coach Joanna Wyche of the No. 4-seeded Warriors pronounced the tournament a &ldquo;wide-open&rdquo; affair.

&ldquo;It doesn&rsquo;t matter what your record is; it&rsquo;s achievable,&rdquo; she said. &ldquo;It will go down to which team will choose to engage and play.&rdquo;

No surprises dotted the first day of the Division I volleyball tournament single-elimination playoffs on Guam, as all eight top seeds won their respective first-round matches.