Future is bright for these two young Lakenheath runners 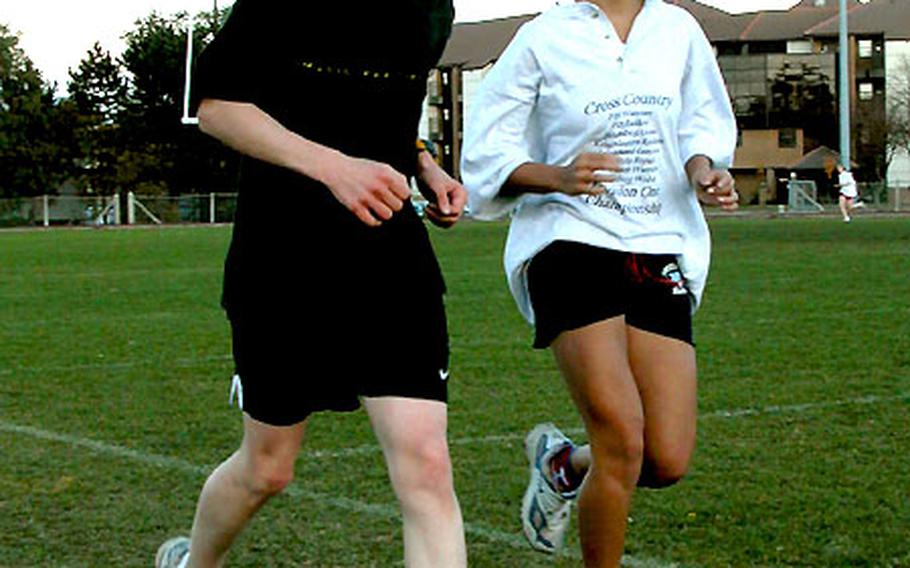 Greg Billington, left, and Frankie Houck of Lakenheath High School are the top runners on the Lancers cross country team. Both have competed in mini-triathlons. (Charlie Coon / S&S)

Cross-country, both Billington and Houck say, is self-driven.

Running is a solitary, grueling sport. It&#8217;s just you against your body. There&#8217;s no one else to score the basket, no one else to drive in the winning run.

He said it helps to have fans.

If they dedicate themselves, he said, they&#8217;ll improve. Time is on their side.

&#8220;I can see Frankie being a leader a couple years down the road. Right now both of them lead by example. They work hard during training.&#8221;

Neither are veterans of the sport. This is Billington&#8217;s first year of cross-country and Houck&#8217;s second.

Billington won his first race back in September. Not bad for a freshman.

But sports aren&#8217;t everything to this duo.

Billington is active in Boy Scouts, plays jazz piano and has earned a black belt in the martial art of Kuk Sool Won.

Houck plays flute, is enrolled in advance placement classes at school and is dedicated to animal welfare.

While they&#8217;re both new at cross-country, neither are new at pushing themselves.

Both are members of the West Suffolk Swim Club and compete nationally in England. Billington excels at the backstroke, and both are accomplished freestylers. Their years of swimming helped give them the wind to run cross country.

Robin Houck is involved in Frankie&#8217;s activities. It takes up her time, Houck said, but not any more time than it takes to keep kids out of trouble.