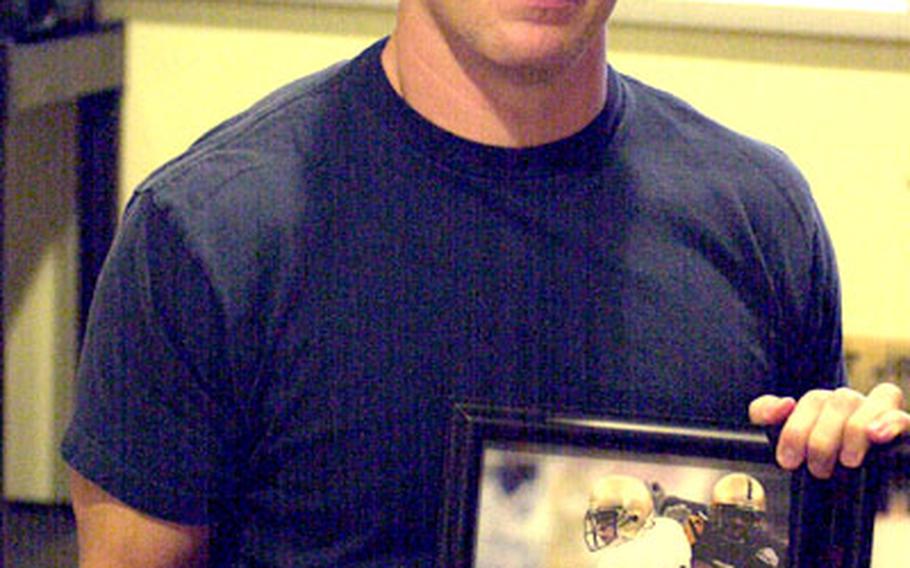 Scott Jones, Naval Academy Class of 2000 and a reserve quarterback/receiver for four seasons at Annapolis, displays mementos of his years in Midshipmen uniform. The Marine Corps first lieutenant is assigned as an Air Defense Controller at Futenma Marine Corps Air Station on Okinawa and lives with his wife, Kim, at Kadena Air Base, Okinawa. (Dave Ornauer / S&S)

The 28-year-old has good reason &#8212; he himself wore the Midshipmen football uniform for four seasons as a backup quarterback and receiver, part of the first Naval Academy graduating class in a generation to have beaten the Army Black Knights twice.

Some of his best memories, he said, of wearing the Navy Blue and gold revolve around what&#8217;s considered the best and most traditional rivalry in college football.

For one, there was marching into Philadelphia&#8217;s Veterans Stadium in December 1995, when he attended the Naval Academy prep school.

To this day, Jones still oozes Navy football, and takes great pride in watching the Middies&#8217; current success, after playing for Navy teams that went 24-20 under then-coach Charlie Weatherbie.

All his life, Jones said, from the time he was growing up in Texas to graduating high school in Chattanooga, Tenn., he had attending Annapolis set in his mind.

His entire family was football-oriented. His grandfather Willie played for Vanderbilt and flew torpedo bombers in World War II. His father Bill played at Richmond, his brothers Greg and Curt played for Mississippi State and his brother Kent is a senior at Tennessee-Chattanooga and went to Annapolis for a year.

Attending a service academy is a far different beast, he says, than your run-of-the-mill Division I program, in which 300-pound corn-fed bison-sized players aspire to wear an NFL uniform. Academics and military come first; football merely enhances the teamwork aspect of academy life.

Nothing tops the feeling of being part of the Army-Navy rivalry, with its pageantry and patriotism.

Perhaps the greatest memory of all, Jones said, was the 19-9 triumph in 1999 at Philadelphia, which was capped by defensive back and longtime friend John Chavis&#8217; interception in the closing seconds.

Jones&#8217; wife of five years, Kim, saw him experience that up close and personal. The two dated from the time Scott was a senior and she a junior in high school, and she also felt the rush that Jones did.

Only briefly since he graduated in 2000 has Jones stepped on a football field. While deployed for six months in Afghanistan, he played a game of flag football against some soldiers.

Then a few weeks ago, he was sounded out as a possible quarterback for the Okinawa Football League&#8217;s Foster-Futenma Bulldogs, but two snaps into his first practice, he tore his right anterior cruciate ligament, necessitating surgery at nearby U.S. Naval Hospital Camp Lester.

That surgery came Thursday, after which comes rest and rehabilitation and a cozy spot on the sofa to watch Army-Navy to reconnect with the rivalry stamped in his mind forever.