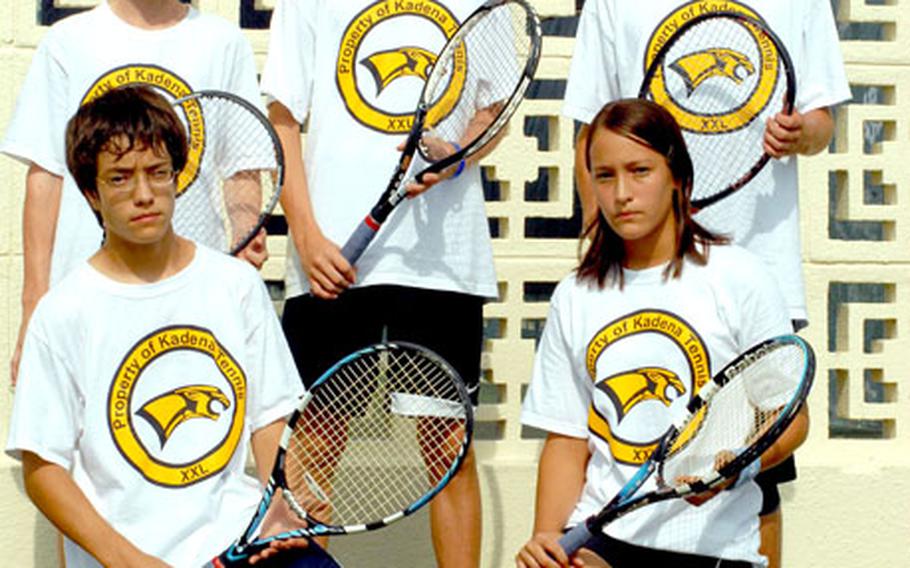 Kyle Trenor is the top boys singles player for a Kadena squad that should compete strongly for a Far East title. (Dave Ornauer / S&S)

KADENA AIR BASE, Okinawa &#8212; When a team&#8217;s stars depart and the coaching reins change hands, most squads can expect to face a lengthy rebuilding process.

So, why is new Kadena tennis coach Robert Bliss all smiles? After all, the talent that led the Panthers to a 2004 Far East tournament team title and came within a whisker of repeating last year is all gone.

It might have something to do with five freshman players, new to the program but certainly not new to the sport.

New Kubasaki co-coach Rick Kendall, who began coaching at E.J. King at Sasebo Naval Base in 1996, said he couldn&#8217;t recall a squad that welcomed so many freshmen in one year.

They can be found practicing on weekends and taking lessons from longtime 18th Services instructor Tokio Nakamatsu even after Kadena&#8217;s matches on Thursdays, or they&#8217;ll collar Bliss and just volley with him to stay sharp.

It also mitigated what otherwise might have been a complete rebuilding task.

&#8220;Most times, you&#8217;d be taking a soccer or basketball player, an athlete, and trying to turn them into tennis players,&#8221; Bliss said. &#8220;With these guys, there are fewer things for me to worry about. We can deal with match strategies, team concepts, which are important in any sport.&#8221;

Trenor and Ellisa Mason credit Nakamatsu, the 69-year-old who teaches daily at the Risner Tennis Complex, with ramping up their game, hitting form, serve and concentration.