Freshmen chip in as Kadena knocks off Kubasaki 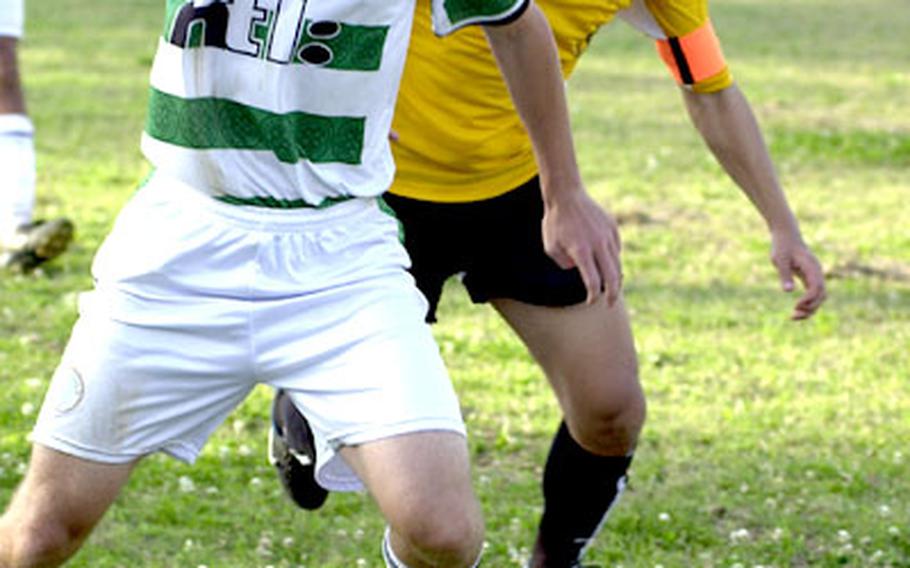 KADENA AIR BASE, Okinawa &#8212; On an otherwise senior-laden boys soccer squad, freshmen made the difference for Kadena in a crucial match Thursday.

Nathan LaGrave and Aaron Zendejas scored eight minutes apart and the Panthers held off a second-half charge for a 3-2 victory over the Kubasaki Dragons, the two-time defending Class AA Far East champions.

It was a breakout game for LaGrave and Zendejas, who each got their first goals of the season, pleasing Kadena&#8217;s second-year coach, Sue Fitzpatrick.

She called the three freshmen &#8220;vital&#8221; additions to the team, as did striker Scott Knutson, one of six returning seniors from a squad that finished third in Class AA last year.

&#8220;They&#8217;ve filled the positions of people who graduated,&#8221; Knutson said, referring to departed standouts Ian Galloway and Aaron Betancourt. The freshmen &#8220;hustle, they communicate, they play hard, they&#8217;re determined and they love the game. They&#8217;ve been really important additions to the team.&#8221;

After Knutson put Kadena ahead in the 15th minute on a breezy, sunny afternoon, LaGrave curved a corner kick into the net in the 36th to make it 2-0. Four minutes into the second half, Zendejas converted Knutson&#8217;s through pass.

In the closing minutes, Gray had another direct-kick opportunity, but he clanged it off the crossbar from 35 yards away.

Kadena (3-2-1) pulled even with Kubasaki (4-4-1) in their Okinawa High School Athletic Association season series, with each club holding a win and tie.

It&#8217;s the first time since the advent of Far East tournaments in 1998 that either school&#8217;s boys or girls squad finished the OHSAA season series deadlocked. Historically, the team that has won the season series wound up losing to the other in Class AA tournament play.