Freeman helped Ramstein back to top 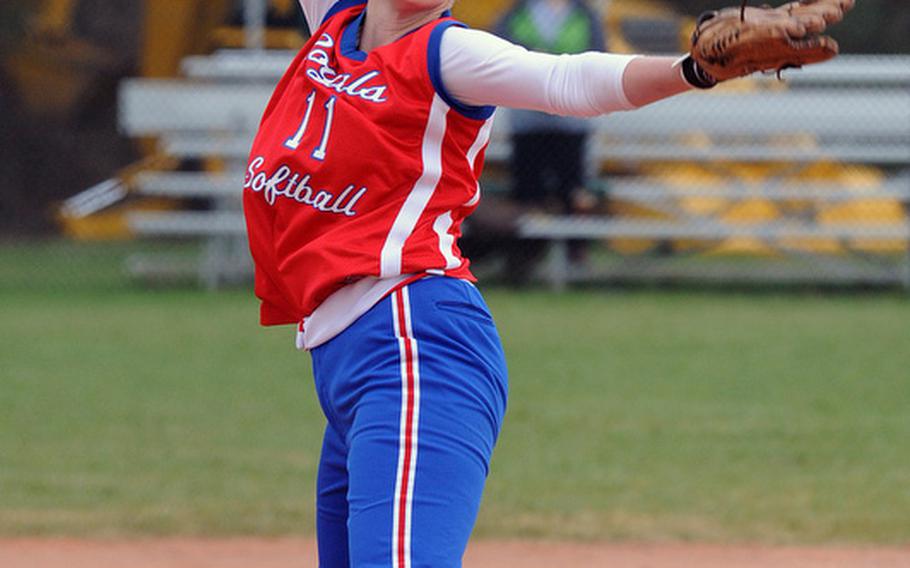 Ramstein's Kelsey Freeman pitched a no-hitter in the first game of a doubleheader against Lakenheath in March. Freeman has been selected Stars and Stripes softball Athlete of the Year. (Michael Abrams/Stars and Stripes)

Ramstein's Kelsey Freeman pitched a no-hitter in the first game of a doubleheader against Lakenheath in March. Freeman has been selected Stars and Stripes softball Athlete of the Year. (Michael Abrams/Stars and Stripes) 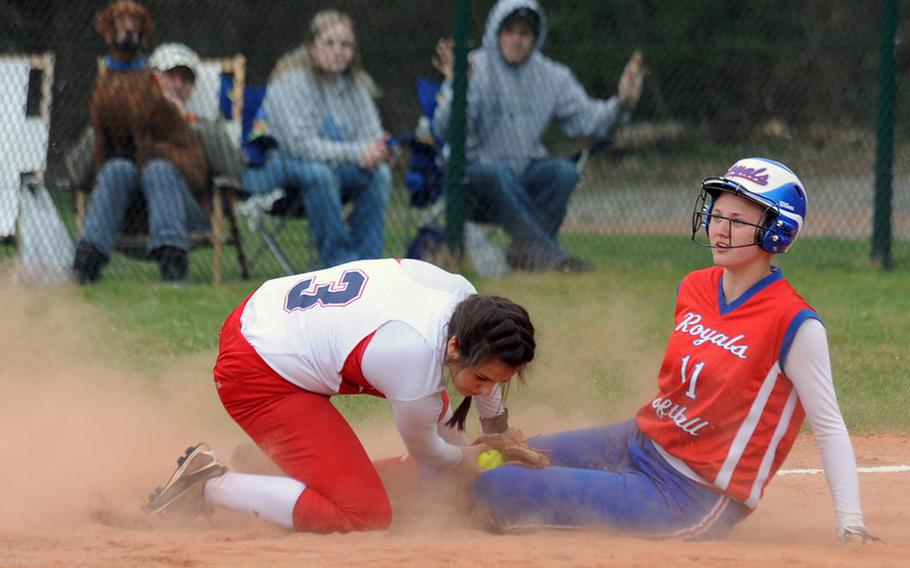 Ramstein's Kelsey Freeman looks to the umpire after stealing third against Lakenheath's Nikki Gill in a game in March. Freeman has been selected Stars and Stripes softball Athlete of the Year. (Michael Abrams/Stars and Stripes)

Ramstein junior Kelsey Freeman just completed her third straight All-Europe-level season with a 7-2 record, a 1.79 earned-run average, a strikeout-to-walks ratio of nearly 12-1 and a European Division I title-game victory.

Talk about enhancing the resume. For her three-year career, Freeman, a right-hander, is 23-3 with 206 strikeouts and has allowed just 32 earned runs.

But what impressed the Stars and Stripes&rsquo; 2012 softball Athlete of the Year, who didn&rsquo;t lose a game in this year&rsquo;s tournament, was the rest of her team, which ended its one-year absence from the D-I throne room with a 9-5 victory over Vilseck and a record ninth European crown.

&ldquo;The highlight for me was how great our team was together,&rdquo; Freeman said by telephone on Wednesday. &ldquo;The intensity was so much more than last year, yet everyone was so encouraging to each other, even when things went bad.&rdquo;

For coach Kathy Kleha, who won a title in her first year at the helm of the Royals, Freeman&rsquo;s focus on the team was far from unexpected.

&ldquo;This year she became more of a team player than a &lsquo;me&rsquo; player,&rdquo; Kleha emailed on Monday. &ldquo;She stepped up to put the needs of her team above hers at the end of the season.&rdquo;

Those late needs deepened when Ramstein, 11-3 during the regular season, dropped two one-run games to West Region champion Kaiserslautern on the final day of the season.

But Freeman, who struck out 94 batters and walked just eight, said the losses at K-town merely stoked the Royals&rsquo; fires.

&ldquo;It was very motivating for us,&rdquo; she recalled. &ldquo;It got us ready for the tournament.&rdquo;

For Freeman throws a fastball, curve, screwball and change-up and said she&rsquo;s working on a &ldquo;rise-ball.&rdquo; She said tourney preparations involved more than attitude adjustment.

&ldquo;Our pitching coach (former Lakenheath standout and present U.S. Air Force Capt. Lindzi Howder) had me working on throwing to spots, depending on the batter &ndash; where she stands in the box and how she swings. It really made a difference.&rdquo;

Freeman, a product of the potent Ramstein youth softball programs, cited watching former Royals All-European Maddie Byrd pitch as her inspiration to excel in the sport. She sees experiences such as an all-star stint last summer as one of the advantages of playing in Europe.

&ldquo;Some of my friends have moved to the States.&rdquo; Freeman said, &ldquo;They play on club and traveling teams and get midweek games. They also get seen by college coaches. But we&rsquo;ve gotten to play in Italy and the Netherlands and played against Russia. You don&rsquo;t get to do that in the States.&rdquo;

This summer, however, Freeman&rsquo;s planning to try her hand in the States before returning to Ramstein for her senior year.

&ldquo;I hope to get on with a club or travel team,&rdquo; she said, eyeing a chance to put her talent on display for college scouts and taking her abilities to a new level.

One thing, however, won&rsquo;t get better, Freeman said.

&ldquo;It&rsquo;s so sad,&rdquo; she said, returning to thoughts about her team, &ldquo;to think that so many of our teammates won&rsquo;t be back next year.&rdquo;