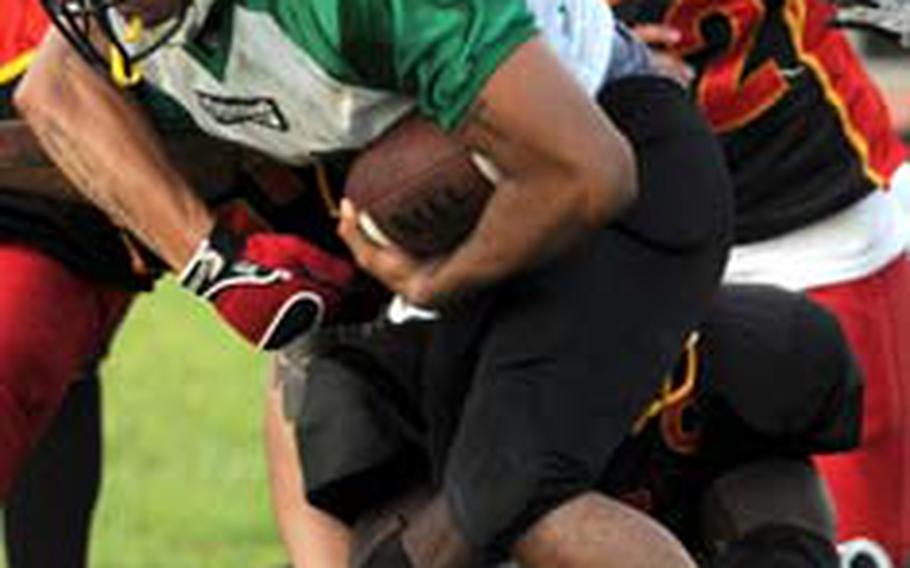 KADENA AIR BASE, Okinawa &#8212; Touchdowns and victories continue to pile up for receiver Corey Moore and the Foster Bulldogs.

Moore hauled in touchdown catches of 41 and 8 yards from Terry Brawner, and the Foster defense picked off three passes and recorded two sacks as the Bulldogs scored 17 unanswered points to down Kadena 17-7 Monday at Kadena&#8217;s McDonald Stadium.

But the Bulldogs want more than the South title. "The championship, that&#8217;s our focus," coach Auburne Edwards said. "We&#8217;ll go up there on the 18th. We want not only to get to the championship, but to host it here," he said of the Torii Bowl, slated for Aug. 22.

Moore had five catches for 79 yards on Monday and has four touchdown receptions this season. "Just want to help out the team. Trying to compete and keep up with Yokosuka," Moore said.

"He&#8217;s one of our veterans," Edwards said of Moore, 34. "We depend on him not only for touchdowns, but his leadership on and off the field."

Moore&#8217;s performance, as well as those by Brawner (4-for-9, 67 yards) and Dylan Law (61 yards, 20 carries), were crucial, with the Bulldogs missing several key skills positions players due to injury. "Those guys stepped up," Edwards said.

Foster&#8217;s Johnny Jean-Francois picked off quarterback Jimmy Wright&#8217;s passes on Kadena&#8217;s first two possessions, and Anthony Hatcher snagged a late interception. Tim Craig and Tim Grant combined for one sack and Danny Ramirez had the other.

"Sixty minutes is tough with 17 players. That put us at a disadvantage," Dragons coach Will Cupp said. "Once we get them back, we can play an energized four quarters of football."