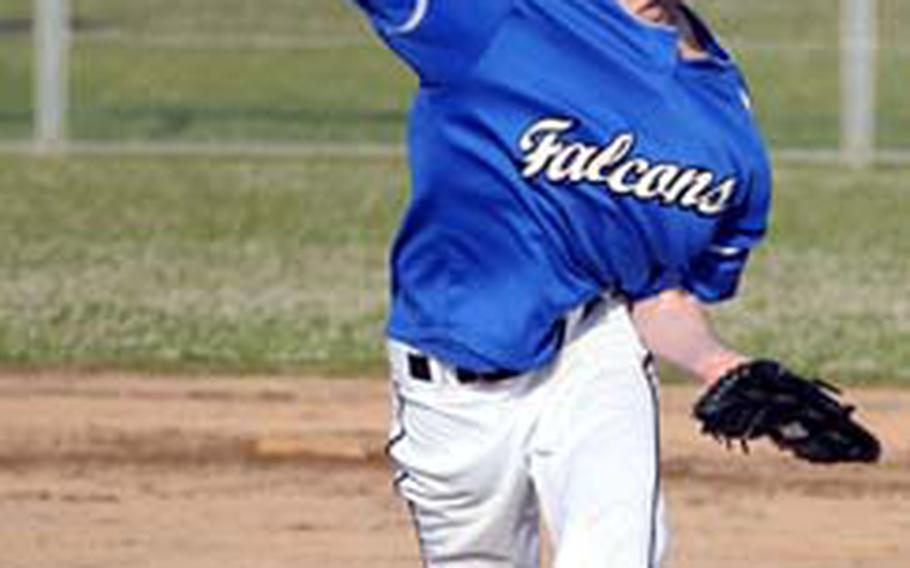 A year ago, Amanda Henderson ran in Kubasaki Dragons green and white. On Friday, as a member of Seoul American&#8217;s brand new track and field team, she netted the Falcons their first gold medal.

Henderson, a sophomore, ran the two-mile in 11 minutes, 57.41 seconds, nearly 40 seconds ahead of her nearest challenger, in the first medal event of the 8th Alva W. &#8220;Mike&#8221; Petty Memorial Track and Field Meet at Okinawa&#8217;s Camp Foster. Kubasaki has hosted the event since its inception in 2003.

Reliever Chris Horton walked the first two Titans to lead off the seventh inning; they advanced to second and third on a wild pitch.

St. Mary&#8217;s Tomoya Minaki then flew to right fielder Will Catineau, who caught the ball and threw home to catcher Casey Donovan to double up Jack Cavanagh at home. Seoul American then appealed successfully that Saman Herat left second base too soon for the third out.

Win or lose, for the Falcons, it gives them the fire-testing they need to prepare for next month&#8217;s Far East tournament at Zama American, coach Bob Heckerl said.

Also on Friday, host Kubasaki got a pair of two-run home runs from catcher Kaleb Robinson, and pitcher Andrew Estes worked his way out of trouble several times to beat American School In Japan 4-1. The Dragons at 3-0 led Seoul American and St. Mary&#8217;s by 1 &#189; games after three days.

On the boys side, Edgren held a comfortable edge, sweeping all six matches with the Trojans this season, including Friday&#8217;s 2-0 shutout of Zama. Matt Linder got his team-leading 21st goal for Edgren.