Former Falcons standout Etienne getting his shot at Div. I Baylor 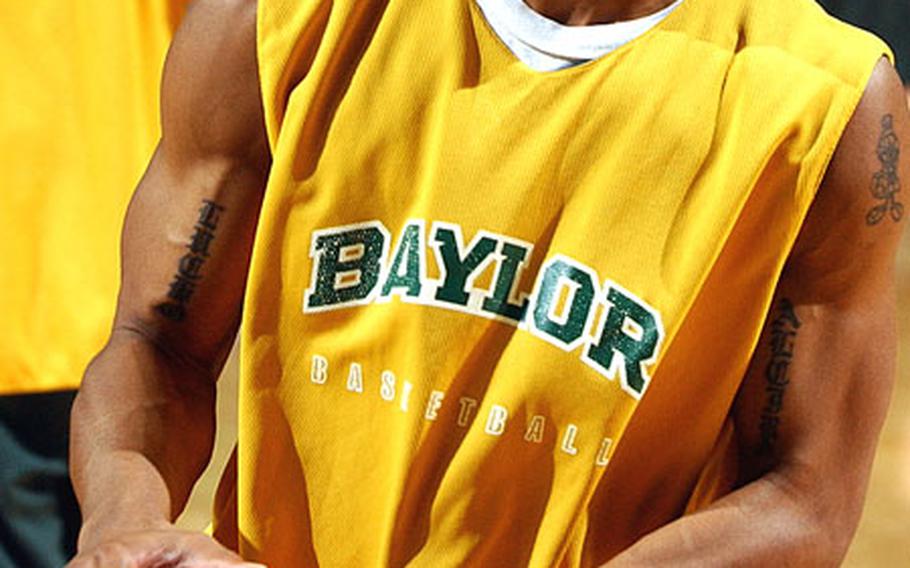 Nino Etienne, a true freshman who transferred to Baylor University in early January, goes through his paces during a recent practice at the Waco, Texas, campus. (Special to Stars and Stripes)

The former two-time All-Far East basketball player from Seoul American has transferred to Baylor after spending the first half of the school year at the U.S. Military Academy prep school in Fort Monmouth, N.J.

Earmarked to play for West Point next year, Etienne said Fort Monmouth simply wasn&#8217;t a good fit and expressed a desire to play closer to home in Texas. Baylor was one of seven Texas schools Etienne visited last spring and summer before settling on Army prep.

Just a 45-minute drive from his native Killeen, near Fort Hood, home station for his father, Sgt. Maj. Luis Etienne, Baylor met his requirements, Etienne said. His father is deployed to Iraq.

&#8220;This is an opportunity for him to achieve his goal, which is to get a good education, and his dream, which is to play basketball,&#8221; said Etienne&#8217;s mother, Alcira, by phone from Killeen.

Baylor was rocked by scandal last summer with the slaying of Patrick Dennehy, murder charges against former teammate Carlton Dotson, and the resignation of coach Dave Bliss. The team had only nine players at the start of the season after two players were ruled academically ineligible. R.T. Guinn and Terrance Thomas were reinstated to the team last week.

The scandal was the main reason Etienne initially declined to go to Baylor, which is serving two years of self-imposed probation.

His former high school coach, Steve Boyd, expressed confidence Etienne can be a part of that success.

&#8220;It&#8217;s exciting and certainly needed information to motivate my players, as well as all DODDS kids, that a dream of graduating from a DODDS school and playing Division I men&#8217;s basketball is indeed a possible dream come true,&#8221; Boyd said.