For Seoul American’s Falcons, it’s all about love of the game 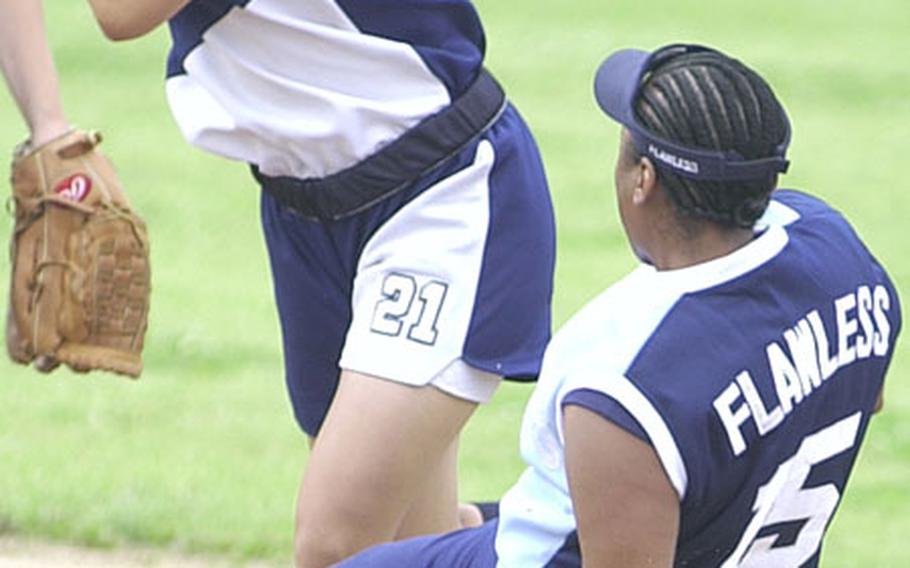 Every spring, the Lady Falcons come to the Pacificwide Open Softball Tournament, thinking this will be the year they win a game or two. Then they take the field against a company- or post-level or South Korean team, and get whipped yet again.

Why bother, when they&#8217;re an automatic W for every team they&#8217;ve played since first entering the tournament in 1994 as the YBG All-Stars?

Losses such as the one to Osan, and a 24-0 pounding at the hands of Kadena on Friday, are at the opposite end of the spectrum from the lopsided victories the Lady Falcons enjoyed in DODDS-Korea play.

They went 12-0 in the regular season, with an average victory margin of 11.63 runs. A 13-7 victory over Taegu American on April 17 was the closest any team came to beating them.

So they press on, learning a bit more about the game and about themselves with every outing. &#8220;We keep our heads high and we take it,&#8221; Voelker said.

Osan Air Base coach William Ogburn appreciates the prep squad&#8217;s effort here &#8212; and believes its will pay dividends next spring on the DODDS-Korea diamond.

Friends on a long road trip

Their days of being assigned to South Korea are long gone. But a handful of former All-Army players on the International Guzzlers just keep coming back.

They could have played in Memorial Day weekend tournaments stateside. But friendship and loyalty lured them back.

&#8220;This team is family-oriented,&#8221; Watts said. &#8220;They come to see friends that we otherwise wouldn&#8217;t see back there. You see different people traveling from North to South Carolina, but you come over here and see familiar faces from Korea, Japan and Okinawa, guys we know.&#8221;

Airline tickets and hotel fees for Nicholson, Watts and Julius were paid out of money the Guzzlers raise through activities such as softball field concessions and team T-shirt and ballcap sales.

Though Pacific Force of Okinawa, winner of 39 Grand Slam tournaments since 1989, isn&#8217;t here, its presence is still being felt.

Duty requirements kept most of the team on Okinawa. Four players came anyway, with Keith Serrano playing for the Guzzlers and three others &#8212; including two former All-Marines &#8212; suiting up for the archrival Yellow Box, the tournament&#8217;s defending champion.

Outfielder Gary Chaney said he made the move as a favor to Yellow Box coach John O&#8217;Brien.

Yellow Box has reached the last seven Grand Slam finals but won only once. Pacific Force beat Yellow Box in three of those matchups.