For Pacific’s top goalscorer, eyes stay on the prize 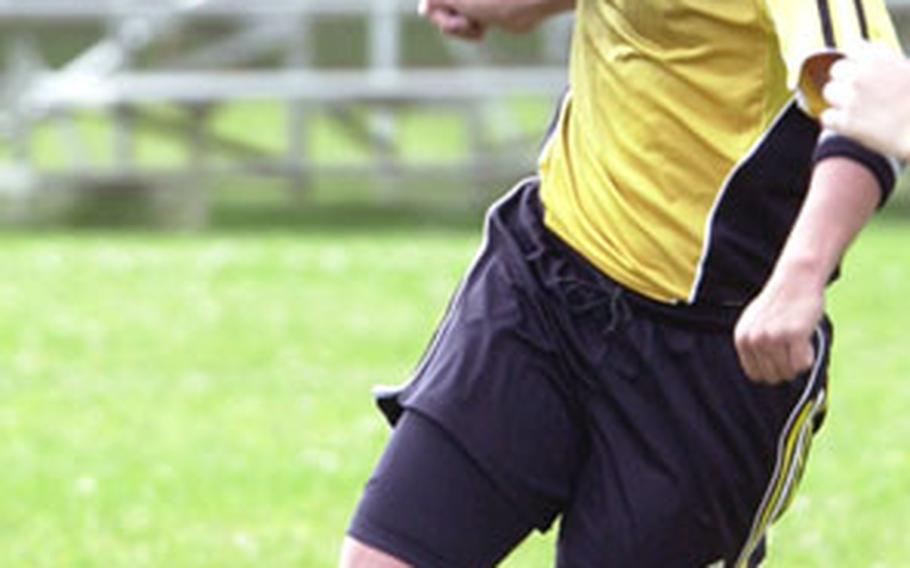 KADENA AIR BASE, Okinawa &#8212; As Dianne Abel&#8217;s high school soccer career winds down, all the individual honors she&#8217;s garnered in her four years as Kadena&#8217;s leading striker have done little to change her outlook.

It would be understandable if they had. Abel is a two-time Class AA tournament MVP and holds the Pacific record for goals in a season (66). Now, with 151 goals, she has passed her best friend, former Kubasaki record-setter Erin Foote, to become the Pacific&#8217;s career goals leader.

Nonetheless, Kadena has for the past three seasons ridden the scoring of Abel and her younger sister Jennifer, a junior. Since they entered the lineup in 2004, Kadena has gone 52-1-1. In that span, Dianne has 78 assists. Jennifer has 79 goals and 51 assists. This year, Jennifer leads Kadena with 40 goals; Dianne has 34.

Dianne and Jennifer insist their feats came as a result of teamwork &#8212; and their teammates insist they try to get them as many opportunities as possible.

Senior right wing Alicia Larson, who has 10 assists, likens the Panthers to a potluck dinner, where &#8220;everybody brings a little something different to the table.&#8221;

Jennifer agreed, saying, &#8220;Our team is at such a high level, no one person is really standing above anybody else. Everybody is doing their part. Everybody is looking good.&#8221;

It&#8217;s also evident off the field, whether the players are making designs for their team T-shirts or hanging out at Burger King.

With two matches and the Class AA tournament on tap, Dianne could set career scoring standards tough to topple. She insists that&#8217;s far from her mind.

A rival coach cites such leadership as a crucial element in the Panthers&#8217; team-first attitude.

Said Okinawa Christian School International&#8217;s David Lacar, &#8220;She&#8217;s a complete player, a leader by example, her work ethic, her determination to improve on already good skills.&#8221; She elevates her teammates&#8217; level of play, he said.

Dianne graduates in June and will play beside Foote at Winthrop University in South Carolina next fall; Jennifer returns next year as a senior. Nguyen says he feels blessed to have had them in his lineup for two years.