Foote is the foundation as Kubasaki works to rebuild 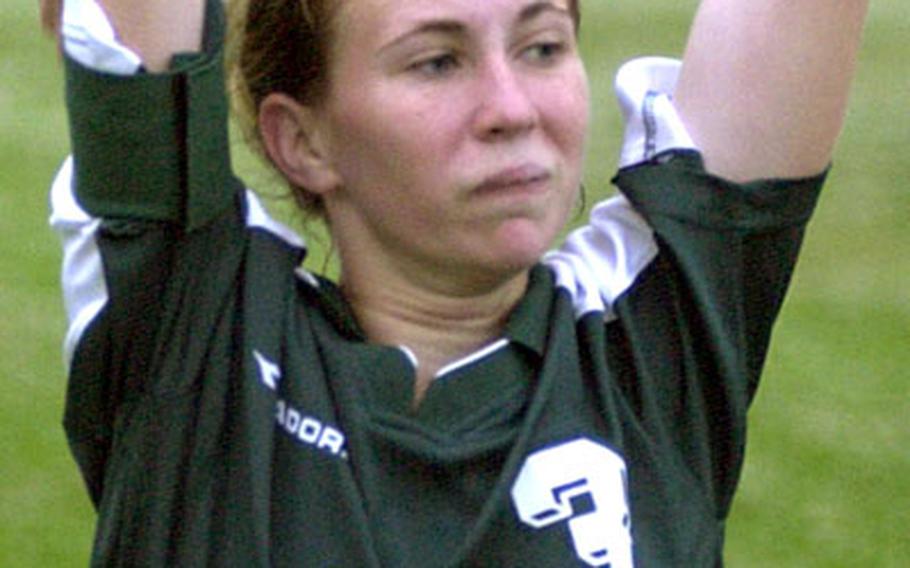 Junior Erin Foote has seen a lot of success in her high school soccer career.

But the glory hasn&#8217;t been there this season and prospects of another championship are dim after some of the Dragons&#8217; key players either graduated or transferred.

There is a small core of veterans trying to blend with a group of youngsters, including talented freshmen Kimi Cece and Sarah Rhodes in the middle.

&#8220;It&#8217;s like my sophomore year all over again,&#8221; senior goalkeeper Debra Kinzley said, recalling how Kubasaki struggled to rebuild in 2002, going 0-2-1 in the regular season against Kadena, only to rise up to win the Class AA title.

She&#8217;s bore the brunt of the rebuilding and retooling effort, with Foote, the most visible of Kubasaki&#8217;s veterans.

&#8220;I&#8217;ve always felt that burden, but not quite to this extent,&#8221; Foote said, adding, however, that the added responsibility is fueling even greater efforts on her part.

But making the team competitive in this year&#8217;s Class AA tournament, less than four weeks away at Camp Zama, Japan, might be too tall an order.

She and the other veterans have stressed to the youngsters the need to communicate and understand what they&#8217;re up against.

&#8220;They need to realize that high school soccer is different from youth ball. You need to take things more seriously,&#8221; Kinzley said.

Trying different lineup combinations, seeing where the strengths and weakness of the new players lie, and how best to make it function with the strengths of the veterans and hoping it all comes together soon, is what Chumley hopes for.

Though Kadena has held sway in the first two of their three regular-season meetings, with a final meeting scheduled for April 16 at Kubasaki, coach Hoa Nguyen says he takes nothing for granted where Kubasaki is concerned.

Remembering Foote&#8217;s role in the 2002 Class AA final, Nguyen says Foote&#8217;s leadership will serve as a key element on the Dragons&#8217; route to regaining that championship edge.

Returning to a competitive level &#8220;comes with time,&#8221; Foote said, noting the gradual rise of Kadena to title-contending status the past couple of years.

Despite the hurdles, Chumley remains optimistic.