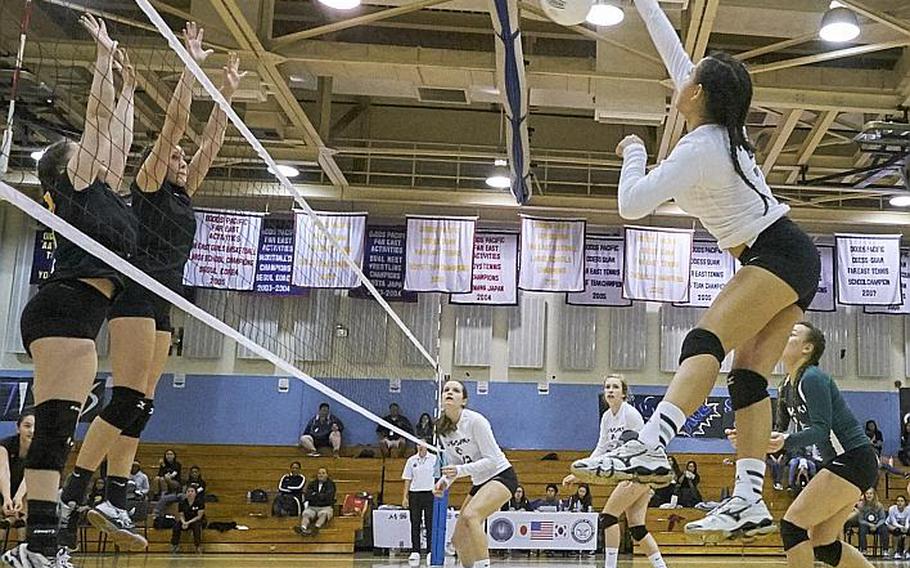 Kubasaki's Miranda Fino strikes from the front line during the 2015 Far East Division I Volleyball Championship game against ASIJ on Thursday, Nov. 5, 2015 in Seoul, South Korea. (James Kimber/Stars and Stripes)

From virtually the time she set foot on a volleyball court, all Miranda Fino had known was setting, from her formative middle-school years to the rise of Kubasaki to a Division I high school power.

So it was with difficulty, conflict and trepidation that Fino approached an entirely new position – outside hitter. By request of her Dragons coach, Mike Hogen, who had a new weapon at his disposal, senior Courtney Kait, a transfer from Virginia with years of club experience.

“I’d been a setter as long as I could remember; I grew up in volleyball at the position,” Fino said Monday, four days after the Dragons repeated their D-I title with Fino fully comfortable at her new position … but not without hard work and a big dose of anguish.

“I didn’t think it would be possible. My mind blocked it out. I wanted to quit,” Fino said.

But before taking that drastic step, she talked with her teammates and her parents, heart-to-heart sessions that convinced Fino to stick it out. It’s been done before, they said. You’ll become a more well-rounded player. You have the skill to do it.

“It was hard to take in the first days and weeks,” Fino said. “I wasn’t good at it at first. But as soon as my confidence raised, everything clicked and I loved the position. I wouldn’t have wished it any other way. I love playing the position now.”

Fino converted some of Kait’s sets into an average of seven kills per match from the position, complementing the middle-blocking work of fellow senior Josie Daffin and the backline defense of sisters Maiya and Mimi Larry and Jordan Deleon Guerrero.

Kubasaki went on to win the American School In Japan YUJO Tournament in October and beat ASIJ again in five sets for the D-I title on Nov. 5 at Seoul American.

For Fino’s sacrifice and her contributions to the championship, Fino has been named Stars and Stripes’ Pacific high school girls volleyball Athlete of the Year.

Having Fino adjust positions could have been difficult on Kait as well.

“The team developed amazing chemistry over the season despite working together for only 2½ months,” Kait said. “There was hardly any tension at all when Miranda was moved to outside hitter. I think she really proved herself in that position and contributed so much to the team.”

Hogen said he knew it would take time for Fino to fit into the position “and she did,” he said. “She would do whatever I asked, play whatever position I needed her to play.”

Fino recognized that for Hogen, it wasn’t going to be an easy decision, but “he wanted to do what was best for me and the team,” she said.

“That’s the way Coach Hogen does things. He knows the goal, he knows what he wants and how to accomplish it and he knew it would benefit the team. And he was right.”

In the end, it was “all worth it” for Fino, she said. “It couldn’t have ended any other way. Perfect ending.”