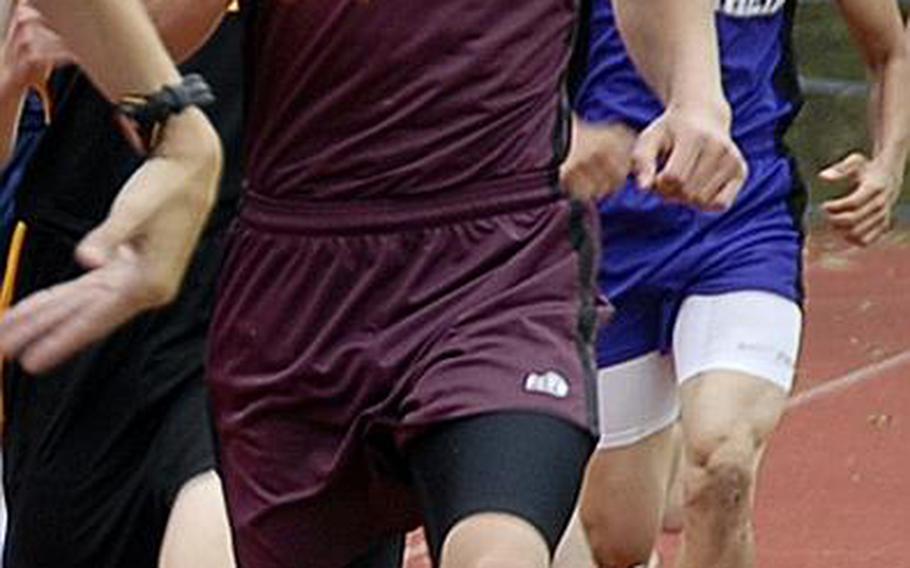 Buy Photo
Zane Kennedy of Vilseck finished second in last year's 800-meter run at the DODDS-Europe track and field finals in 4:15.98. He will be one of few returning medalists for DODDS-Europe teams this season. (Peter Jaeger/Stars and Stripes)

High school track and field opens its 2011 season Saturday at four locations with a clean slate among male athletes.

That&rsquo;s &ldquo;clean&rdquo; as in &ldquo;blank.&rdquo; No 2010 European boys&rsquo; individual champions return to defend their titles.

That&rsquo;s about as wide-open as you can get.

Ramstein is the defending boys Division I team champion, but all those returning silver medalists, along with 100-meter contender Darius Whitehead, a European placer in 2010, and transfers Myles Hall from Patch and North Carolina product Eddie Stokes, both relay runners of note, have Vilseck coach Eric Mead contemplating a move up from his team&rsquo;s third-place finish in 2010.

&ldquo;Ramstein (85 points in 2010) lost quite a bit from last year&rsquo;s senior class,&rdquo; Mead emailed recently, but not without a caveat. &ldquo;But with a school that size, they were probably able to replace those graduating seniors with new athletes.&rdquo;

Aviano was the top-scoring D-II boys&rsquo; team in 2010 with 81 points, but the Saints bid good-bye to 74 of those when Jamal Tuck, Sean Outing and Francis Ledesma graduated. And third-place Mannheim lost 30 points when triple champion Cornelius graduated.

Brussels boys were the only D-III team to score in the 2010 European championships. Rota, Sigonella and retiring coach Larry &ldquo;Liberty&rdquo; Bell&rsquo;s final edition of the Menwith Hill Mustangs hope to change that in 2011.