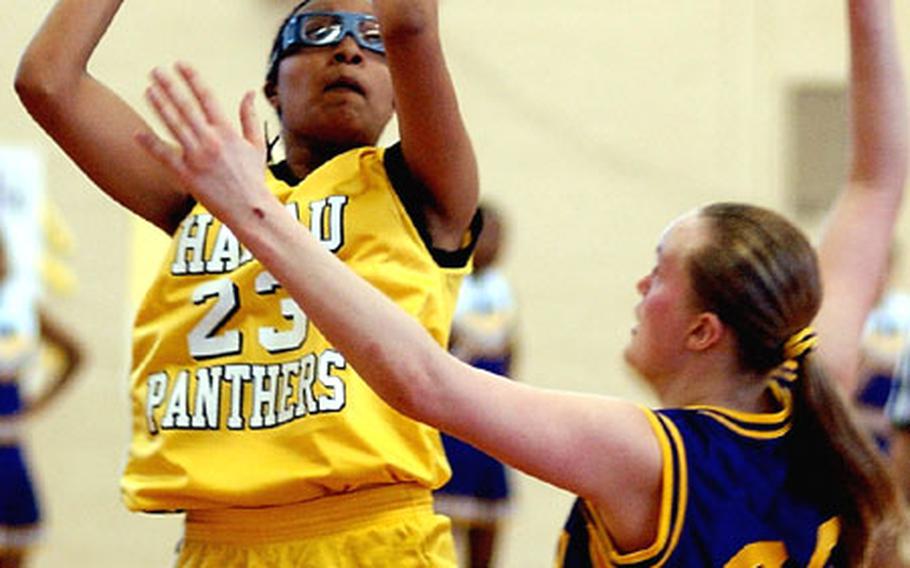 Junior Katisha Fauntleroy, left, hopes to lead the Hanau Panthers to a Division II championship this season and erase the memory of a 45-41 loss to Bitburg in last season’s title game. (Raymond T. Conway / S&S)

That was the season in which her Hanau Panthers swept through the regular season and the first four rounds of the European Division II tournament to a 16-0 record, only to fall to fifth-seeded but two-time defending champion Bitburg 45-41 in the title game.

It&#8217;s also a personal goal, Fauntleroy said, for her to repeat as an All-European selection. So far, she and the Panthers are right on track. Fauntleroy has matched last year&#8217;s stats &#8212; 16 points, 12 rebounds and three blocks per game &#8212; with a renewed determination on defense.

Fauntleroy&#8217;s dedication to defense has a downside, however. By contesting anything and everything, she often finds herself in enough foul trouble to spend portions of the game on the bench.

So far, Fauntleroy&#8217;s rest periods haven&#8217;t harmed the Panthers, who are usually well ahead when she sits and have a sub tailor-made to fill the void in 5-10 senior forward Kyla Bye-Nagel, Kyri&#8217;s older sister.

They&#8217;ll have to next year, when, after three years in Hanau, Fauntleroy takes her talents back to the States. She hopes to make them even more formidable there, with hopes of playing college ball for her hometown team, UTEP.

It hasn&#8217;t hurt her game, tough, that her father, a former center, continues to work closely with his daughter.

The job ahead for Fauntleroy and the Panthers gets a bit more formidable after SHAPE.

Hanau closes out the regular season with road games at Bitburg on Feb. 6-7 and at AFNORTH on Feb. 13-14. At stake will be the No. 1 seed at the European tournament Feb. 19-21 at Mannheim, Germany.

Bitburg and AFNORTH have the scoring and inside presence to match up with Hanau &#8212; Bitburg in two-time All-Europe center Nadia Parker, a 6-2 junior, and 5-11 sophomore Carletta Hernandez, and AFNORTH in high-scoring 5-7 senior guard Laura Rivera and 5-10 freshman Victoria Webber.

Fauntleroy can&#8217;t wait, especially for the rematch with Bitburg, who the Panthers swept in Hanau last season.

Fauntleroy promised there&#8217;d be no gamesmanship against three-time defending European champion Bitburg. Hanau wouldn&#8217;t hold anything back in the regular-season games to save for the tournament.

If the Panthers don&#8217;t, Fauntleroy said she&#8217;ll still leave Hanau with a sense of accomplishment.