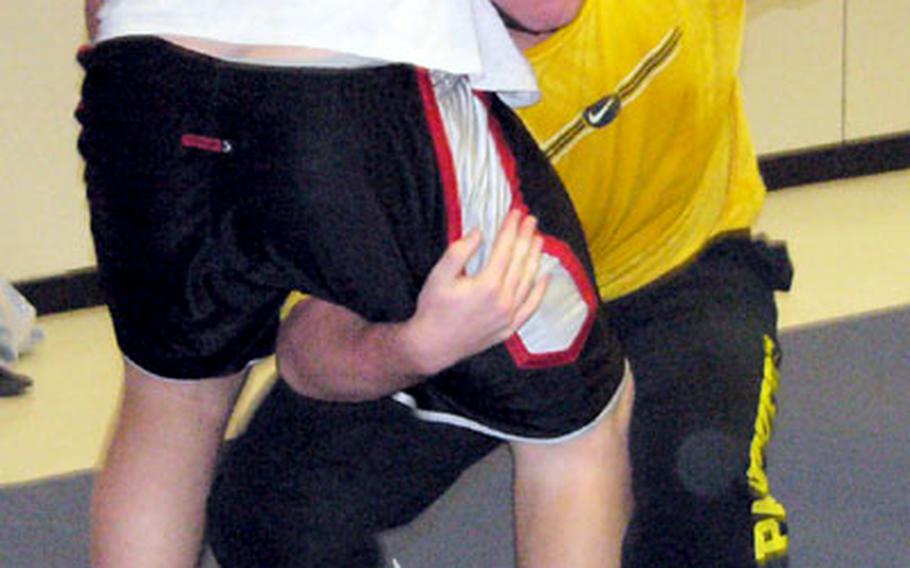 Never mind that Maxey had already informed the European football world of his presence, making the All-Europe team at linebacker. This is wrestling, where success is based on individual effort.

Maxey, a 215-pounder who won the Far East championship last season at Kadena High School on Okinawa, made the most of his chance in the opening meet of the season on his home mat. He defeated Kaiserslautern&#8217;s Rocky Fischer and Patch&#8217;s Joey Pirez en route to the meet title at 215.

It was the opening salvo in his quest to add a European title to his Pacific crown, a feat that would make Maxey a &#8220;DODDS world champion.&#8221;

To accomplish that feat, Maxey will have to overcome some of Europe&#8217;s best wrestlers: Ansbach&#8217;s Mike Ewing, runner-up at that weight last season; and SHAPE&#8217;s Richard Rendon, third at 189 last season.

Maxey, who began wrestling five years ago, looks forward to the challenge.

In addition to the personal challenges, Maxey is having to adjust to the American college rules used in DODDS-Europe. It&#8217;s a bigger change than one might guess, particularly after the takedown.

Math teacher Gary Steffensmeier &#8220;is an assistant in name only,&#8221; Izzo said. &#8220;He was a three-time All-American at Northern Iowa and a two-time Iowa state champion in high school. He brings that Iowa intensity to our practices.&#8221;

Maxey gives the Ramstein coaches a good base from which to build, according to training partner James Horst, Ramstein&#8217;s 275-pounder.

For Maxey and his team, the situation looks good. There are strong newcomers, including Maxey, Winston and Ohio transfer Coty Rinehardt &#8212; a freshman who beat European runner-up Jose Figueroa last week in a 135-pound bout. There are also solid returnees, such as Noah Sheppard and Logan Rainforth.