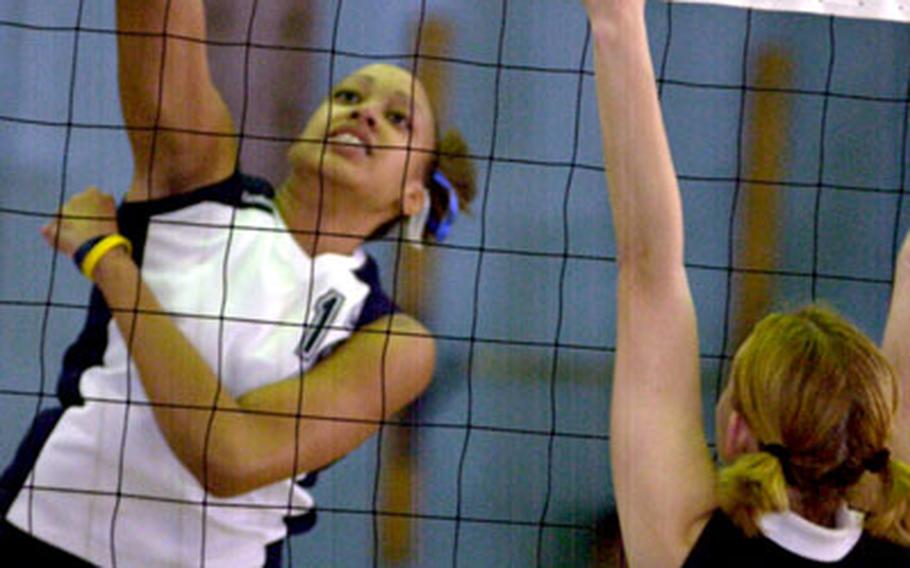 With the dual victories, the Falcons took a giant step toward their first overall championship since the tournament&#8217;s inception in 1979. The overall team title will be awarded Friday after the doubles and Elite Eight singles portion of the three-day event.

Meanwhile, the tennis team continued to pile up honors in what&#8217;s become a banner week for Seoul American&#8217;s athletic teams.

Willie and Flores expressed surprise about winning the girls team competition; at season&#8217;s beginning, Seoul American&#8217;s girls were thought to be rebuilding, while the boys team was viewed as the experienced portion of the squad.

Accordingly, the Falcons girls entered the Far East tournament, which began Wednesday, a tad nervous - until they watched their potential opponents.

Once there, each team split its two singles matches, leaving it up to Choi and Willie on the girls&#8217; side and Chris Paek and Song Ho Downes on the boys&#8217; side to win it for the Falcons.

Willie credited the stern tests the Falcons endured in the Korean-American Interscholastic Activities Conference regular season against international school powers Seoul Foreign and Seoul International, which &#8220;put us in our place,&#8221; Willie said.

While round-robin and divisional matches meant little more than determining playoff seeding, coaches such as Lewis viewed them, and the entire regular season, as &#8220;all about developing and preparing teams for playoff matches.&#8221;

One team that looked prepared was Seoul American, host of the Class AA tournament. The Falcons reached the quarterfinals with a relatively young squad.

Amping up a team&#8217;s level to match the sense of urgency that goes with the single-elimination format used by the Class AA tournament requires &#8220;a different mind-set,&#8221; said 26-year Falcons coach Denny Hilgar.

Coaching young teams is a &#8220;constant battle to get them to believe in themselves as a talented ballclub,&#8221; Hilgar said. &#8220;A lot rests with the tournament age of your team. The more experienced teams can shift into that gear.&#8221;

Tennis(Click here to jump ahead to volleyball scores and schedules)

Match 15-American School In Japan vs. Academy of Our Lady of Guam