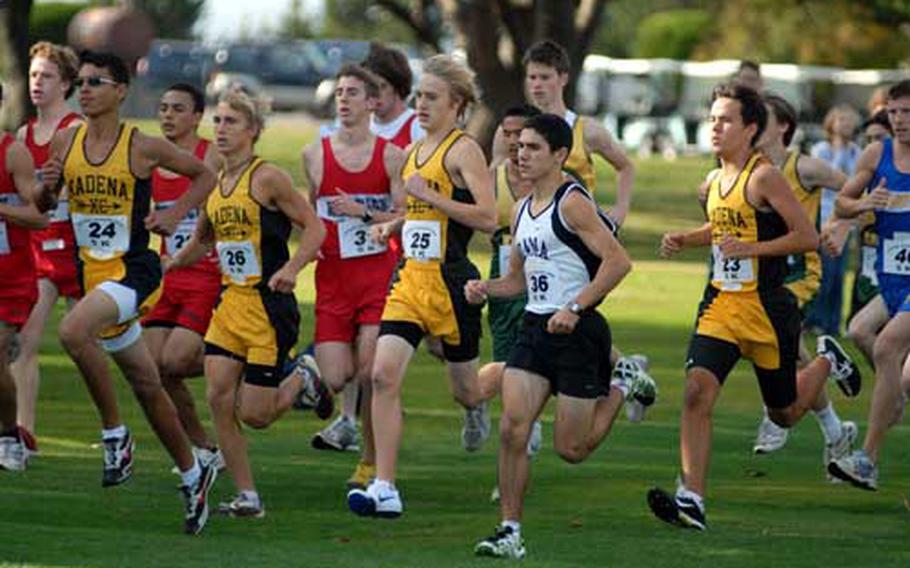 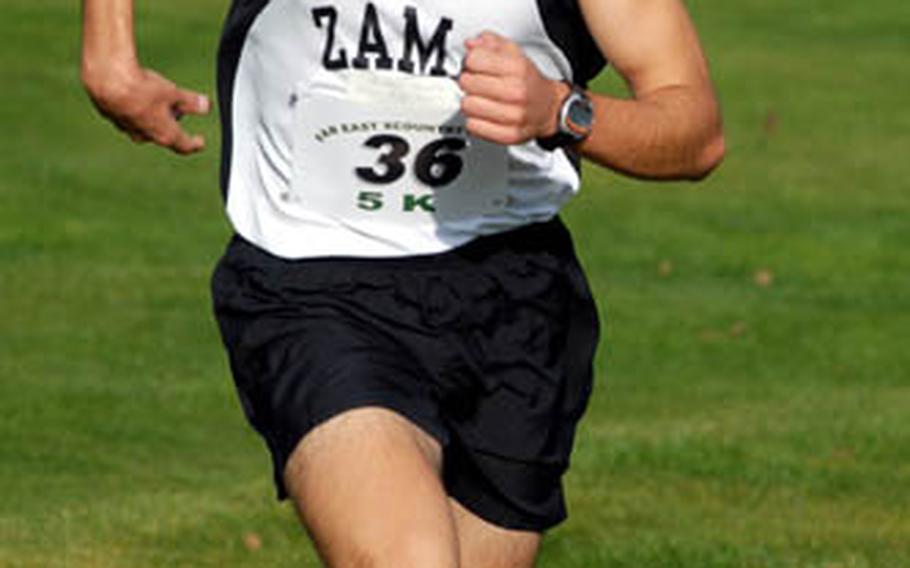 Zama American senior Andrew Quallio makes his way up the final hill toward the finish line. Quallio became the first DODDS-Pacific runner in meet history to win back-to-back titles, clocking a 16:20.37, better than his 16:43.99 showing a year ago at Kadena Air Base. (Dave Ornauer / S&S) 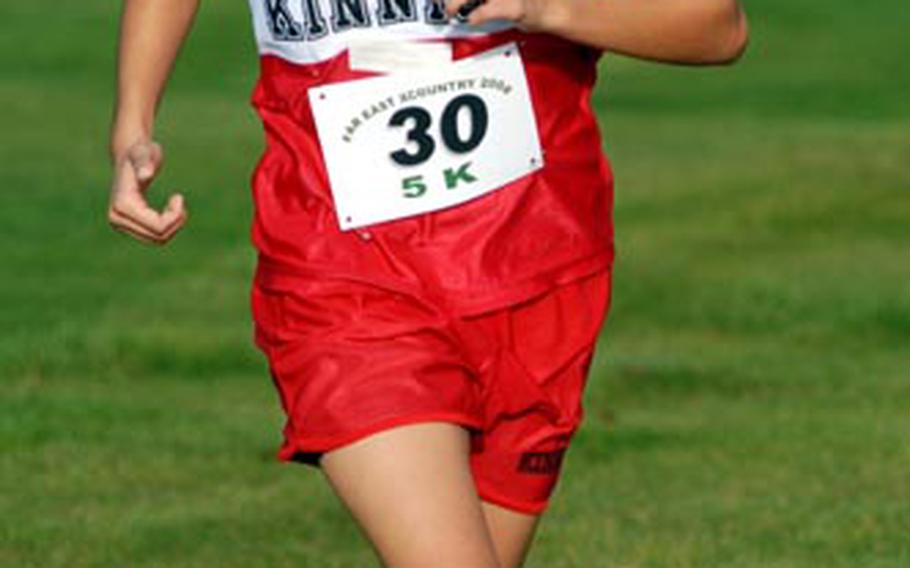 MISAWA AIR BASE, Japan &#8211; A look of grim determination on her face, running for all she was worth, Nadine Mulvany strained for the finish line, then tumbled to the ground once she finally crossed it.

Tired, weary but oh, so happy she was, as just two words repeatedly poured from her mouth as her chest heaved from exertion.

"I won! I won!" she said again and again, seconds after completing her season of redemption.

A champion in 2006 who fell on hard times during a winless 2007, the Nile C. Kinnick senior found her way back to the mountaintop by reclaiming the gold medal in Monday&#8217;s DODDS-Pacific Far East High School Cross-Country Meet&#8217;s girls 3.1-mile individual race.

She blazed across Misawa&#8217;s Gosser Memorial Golf Course links in 20 minutes, 36 seconds, 16.85 seconds ahead of two-time runner-up Chasity Cordova of Kadena. In so doing, she became the third Kinnick runner to win the race in as many years, joining Gee Mi Jorde last year.

On a partly cloudy, breezy afternoon with temps in the upper 60s, Mulvany and Cordova ran neck-and-neck for more than two miles, with Cordova &#8212; who ran outside a course cone last year, costing her the race &#8212; leading at various points as they turned toward the final hill.

Mulvany also credited her teammates for giving her an extra edge.

"They believed in me. And my coach [Philip Bailey] is always energetic and positive."

Quallio, meanwhile, credited the early strength of two Kadena runners, including Edwards, for helping him set a scorching pace.

As in last year&#8217;s victory by almost a full minute over Kadena&#8217;s Brant Casteel, Quallio on Monday pulled away, running the first mile in 4:43 and subsequent two miles in 10:04, before hitting the wind and the final hill.

He beat his winning time last year by 24 seconds, and his ninth-place time in the Florida 4-A championship two years ago by four seconds.

"I give thanks to them [Kadena runners] for taking me out that fast," he said, adding of his career finale: "For me, it&#8217;s very, very special. To finish my high school career on a note like this is awesome."

Casteel, who finished second the past two years, stumbled near the finish and fell to 12th. He needed assistance to leave the course.

On the Class AA team front, Seoul American&#8217;s boys made a first step toward reclaiming the overall crown it last won in 2005, scoring 31 points, five ahead of Kadena and Kinnick. Two-time defending champion Kadena won the girls title 24-26.

Host Robert D. Edgren made it a clean sweep of the Class A boys and girls titles, the boys beating Osan American 9-18 and the girls tying Osan 11-11 but coming out ahead on a placement tiebreaker.

Tuesday&#8217;s singles championships were postponed until at least Wednesday, tournament director Hoa Nguyen said. The possibility of playing into Thursday&#8217;s rain date for the first time since 1995 was very real, he added.

"They are getting stronger with every swing," said Denny Hilgar, whose Seoul American squad was swept 2-0 by the Mustangs, sporting senior holdovers Gwen Thornton and Anna Lorentz from that 2006 team. "They&#8217;re like ASIJ teams of the past."

Meanwhile, defending Class A champ Osan American also got the early jump on its opposition in Daegu, South Korea, winning its three pool-play matches and dropping just one set.

"They were very disappointed with the way they played," Pease said, specifically citing their semifinal loss to Seoul American. "So far, so good. They&#8217;re pulling together as a team."