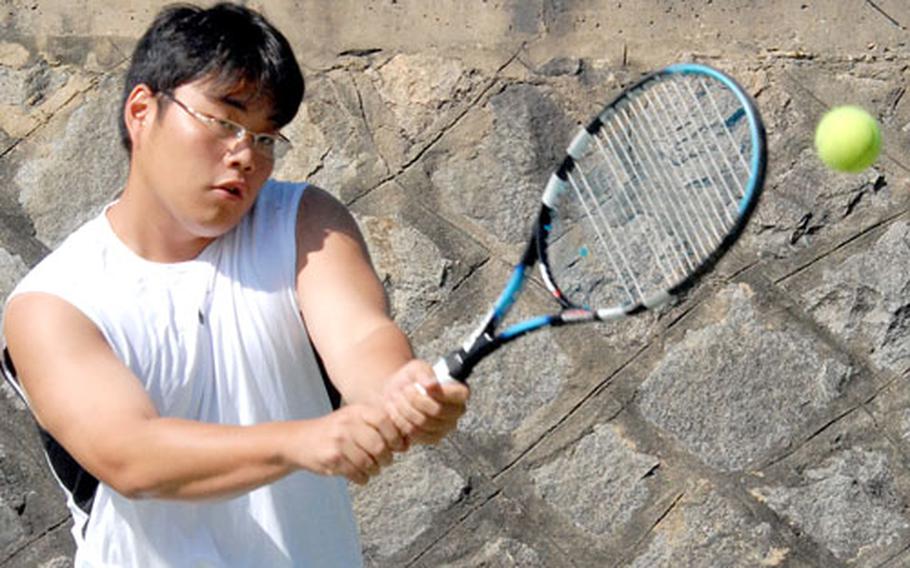 Junior Song-ho Downes is one of four returnees who bolster the roster of a Seoul American team that will defend its Far East tournament title in November on Guam. (Dave Ornauer / S&S)

That&#8217;s the attitude of Seoul American tennis players and cross country runners as the 2006 Korean-American Interscholastic Activities Conference season begins &#8212; with the added burden, for the first time in school history, of defending their respective Far East tournament titles.

Still, the Falcons appear more intent on focusing on what&#8217;s ahead.

&#8220;I&#8217;ve told them, it&#8217;s not so much about winning but competing and feeling good about everything, that they&#8217;re in good, physical shape and they take care of their academics. If they worry about those things, the winning will come,&#8221; Falcons tennis coach Emilia Flores said.

There&#8217;s enough for the tennis team to worry about in the regular season, players said, when KAIAC threats Seoul Foreign and Seoul International will provide plenty of fire-testing.

Once at Far East, Seoul American will encounter strong teams and individual stars. Among those luminaries:

&#182; Junior Kristia Suriben will defend her girls singles and doubles championships and is the flagship player of a strong E.J. King girls squad from Japan.

&#182; Kubasaki of Okinawa is deep in veteran talent in each sport, perhaps returning its most experienced collection of runners and tennis players in school history.

Yance said the Falcons will have plenty of time to get antsy about Far East. Tennis takes place Nov. 6-10, again on Guam, while cross country will be run Nov. 6-7 at Camp Hansen on Okinawa, for the first time.