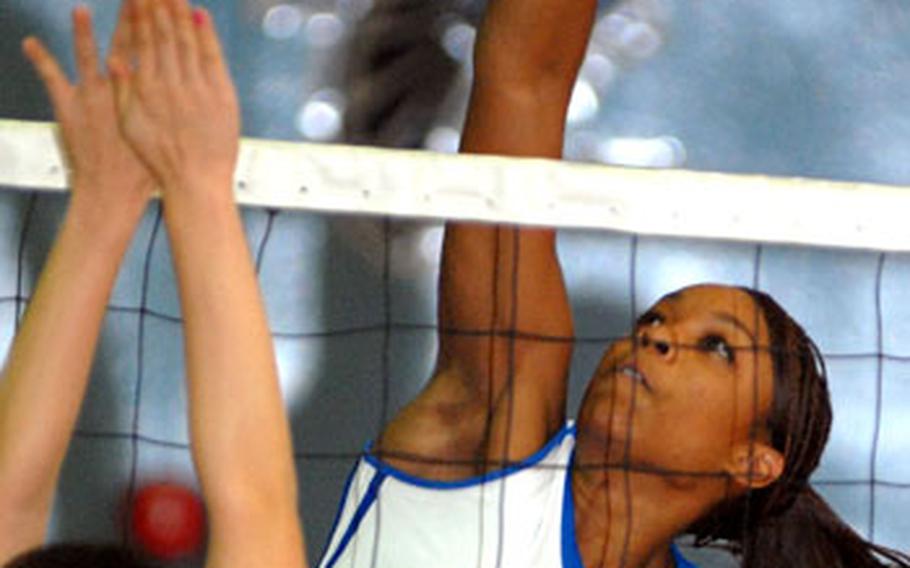 If only for one day, it looked like 1999 all over again for coach Denny Hilgar and Seoul American.

The last time the Falcons reached such lofty heights also came in the UOG facility, when Seoul American lost the 1999 final to Academy of Our Lady of Guam &#8212; a fact that Hilgar, in his 28th year of coaching the team, reminded his team before Thursday&#8217;s match.

It was a goal that Hilgar said the team had been eyeing all season, although there were some times when things were &#8220;touch and go,&#8221; he said. Three times, the Falcons fell to Seoul Foreign during the regular season, but Hilgar said all that&#8217;s behind them now.

While the Falcons&#8217; M&M girls, Manning and Matautia, have been the &#8220;lynchpins&#8221; of the team this season, the entire roster stepped up against Notre Dame.

The second and third sets were markedly different. &#8220;They picked it up, they started covering, getting the passes right. Nos. 14 and 15 (Manning and Matautia) put the team on their shoulders, but everybody else hustled.&#8221;

The Falcons faced 2005 tournament champion Christian Academy In Japan in Friday&#8217;s semifinals. The Knights earned their berth by getting past scrappy Nile C. Kinnick in the second quarterfinal match 25-10, 25-19.

Kinnick has never finished higher than fourth in this tournament, and can&#8217;t do better than fifth this time. But Garrido feels his team is well on its way to matching and exceeding such efforts in the future.

Aside from beating JFK, the Red Devils took a set for the first time in school history off nine-time tournament champion Academy of Our Lady of Guam. Kinnick missed playing in the Gold Division, and earning one of the top four playoff seeds, by two points.

Overtime served as a prevailing theme for the Class A tournament in Daegu, South Korea, where four teams played four matches in 12 hours in Thursday&#8217;s playoffs.

&#8220;Total roller coaster,&#8221; coach Brian Swenty said of the back-and-forth contest, in which libero Nicole Sparks played a key role defensively and the Cougars served 100 percent in the fifth set.

The victory put Osan in Friday&#8217;s winner&#8217;s bracket final against Faith Academy. And it came after Osan had played two earlier matches Thursday; the Cougars on Friday needed to beat Faith, then win once more in the championship match to capture their first title since 2001.

While Osan played three times on Thursday, host Taegu American was one of the unlucky ones who played four.

The 2005 champion Warriors beat Matthew C. Perry of Japan in straight sets, lost to Faith in four, then ousted International Christian-Pyongtaek and Korea International &#8212; whom the Warriors faced for the fifth time in two weeks.

Osan escaped a four-match grind, having earned the No. 2 playoff seed. The top four seeds each earned first-round byes.

But even playing one less match, teams vying for berths in Friday&#8217;s championship match still had a rough road to hoe, Swenty said.